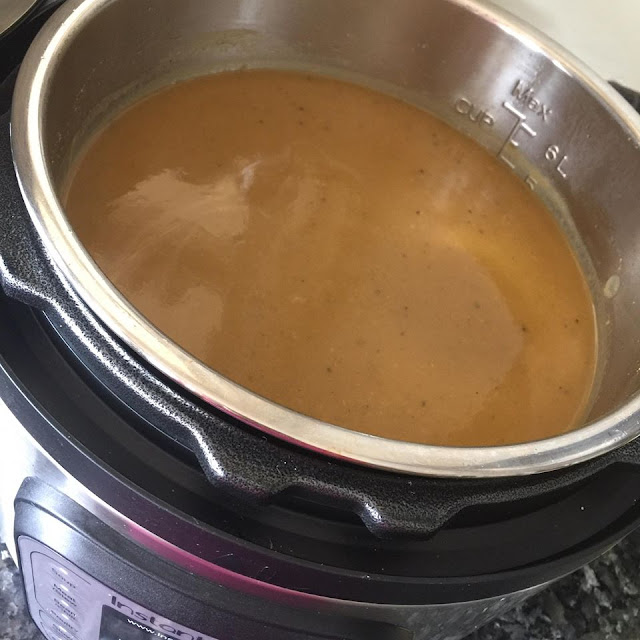 For over two years, we have been enjoying our adaptation of Melissa Joulwan’s Silky Gingered Zucchini Soup.  You'd think that by now we'd be tired of it and would have moved on to a different favorite soup, but truth be told, I can still eat this soup every.single.day, especially for breakfast.  It's a great way to get in some healthy bone both and it's always warm and satisifying.  It's perfectly labled by Melissa as “a healthy hug in a bowl.”  Though a simple recipe to make on the stove, it's now even easier and quicker using our Instant Pot.  Though we have the 8-qt. Instant Pot, it still holds less than our big stock pot, so I've adjusted the amounts from the stovetop recipe.  This recipe will work in either a 6-qt. or 8-qt. Instant Pot. Remember, if you do freeze the soup, you’ll need to puree it again once thawed, either by placing it in the blender or using an immersion blender.  So, if you have an abundance of zucchini or need a warm hug, make this soup!!

Silky Gingered Zucchini Soup ~ Instant Pot (adapted from here)
Turn on saute mode and heat the beef tallow or coconut oil in the liner of the Instant Pot.  Add the onions and sauté until caramelized.  Add the garlic, ginger, coriander, salt & pepper.  Cook stirring continuously until toasted and fragrant, about 2 minutes.  Add the bone broth and zucchini. Press Keep warm/Cancel button to stop the sauté.  Secure the lid and move the vent to closed.  Press Manuel and using the -/+ buttons, adjust the time to 10 minutes.  Once the 10 minutes are finished, allow for NPR (natural pressure release).  Once the pressure has dropped and the pin falls, remove the lid.   Use an immersion blender to puree the soup, or use a blender to carefully puree (use a towel to hold the lid on the blender on whilst pureeing.) Adjust salt and pepper seasoning. Serve hot.