I saw this recipe for coffee crusted steak on Kevin & Amanda’s site and thought, what an interesting idea, so I decided to give it a try.  I strayed a bit from their recipe in the cut of steak, kind of coffee, fat used and cooking method…but the idea of using coffee on a hunk of beef came straight from their site. 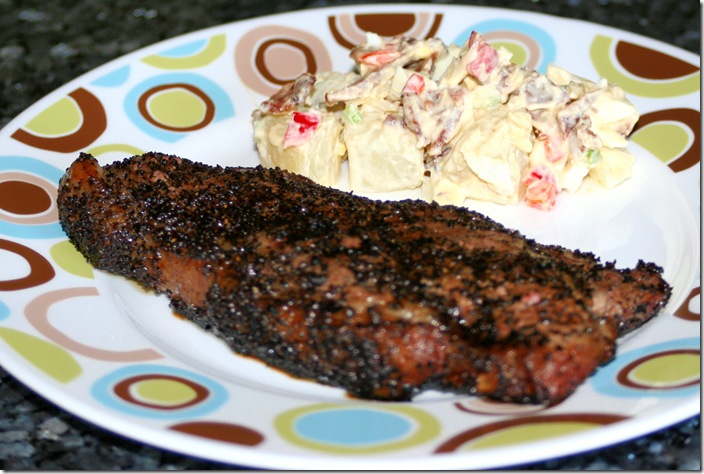 I had two beautifully well marbled New York strip steaks which I made sure were nice and dry.  I then sprinkled them with sea salt and fresh cracked pepper and then I went and looked at my stash of coffee.  I debated between the Guatemala Organic, the Rwandan blend, my favorite decaf or…. 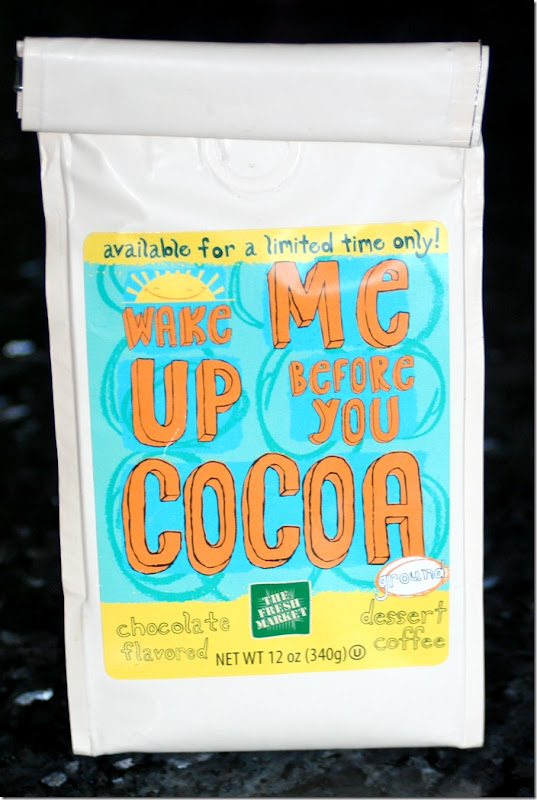 Fresh Market’s dessert coffee, Wake Me Up Before You Cocoa.

Now Kevin & Amanda used a hazelnut coffee and I liked the idea of using a flavored coffee but I almost totally wimped out.  Instead I threw caution to the wind and heavily coated the steaks with my chocolate coffee.  I then misted the steaks with some olive oil and placed them on a roaring hot grill.  Three minutes on the first side, flipped them and then one minute on the second.  I let them rest tented for about 10 minutes and they were a perfect medium rare.

Am I glad that I tried coffee crusted steaks and even more that I used a chocolate flavored coffee?  Heck YES!!  The coffee added a whole new dimension to the flavor of the steak and the little hint of chocolate was just an added depth of flavor which was wonderful.  When I served the steak Eammon asked what they were coated with but I wouldn’t tell him until he tried it.  He had no clue even after tasting that it was coffee but he and I really both really enjoyed this preparation.

Season steaks with salt & pepper and then cover with ground coffee.  Lightly mist with olive oil.  Place on a very hot grill and cover.  Cook for three minutes covered then flip steak and cook uncovered for an additional minute or until done to your liking.  Remove to a plate and tent loosely with foil and allow to rest for 5-10 minutes before serving.