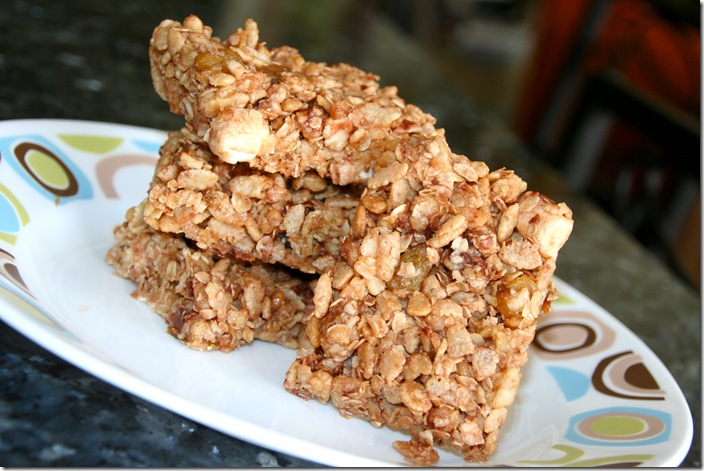 This month for the Improv Cooking Challenge our hostess Kristen of Frugal Antics of a Harried Homemaker asked the participating bloggers to make any recipe of their choice using the two given ingredients of oatmeal and raisins.  Sure, oatmeal and raisins sounds easy enough but I just kept going round and round trying to decide what I want to make.  I finally decided to make something special for my Maisie as it’s her birthday month, and I totally can’t believe that she’s seven, so I figured that I’d spoil her even more than usual.  I of course had to keep her food allergies in mind so other than giving her a bowl of oatmeal with raisins, which I do many mornings, I put on my thinking cap to come up with something that she’d enjoy.  In the end it was Maisie, who without even knowing about my dilemma, came right out and told me what she wished I would make and it fit in perfectly with the challenge.  Maisie mentioned that I hadn’t made granola bars for her in a while and that she’d really enjoy some.  In the past I’ve made a couple of different bars for her including Oatmeal, Cashew & Chocolate Granola Bars and Crunchy Oat, Almond, Cashew & Pebbles Granola Bars and though she’s enjoyed both of those recipes and I’ve made them a number of times, she wanted something different.  I told Maisie that I needed to use oats and raisins but I asked her what else she wanted in her bars and she chose the ingredients.  Maisie asked for cashews, chocolate bits and mini marshmallows.  I also gave her a choice of what other cereal to add to the bars and she picked Rice Krispies.  When Maisie mentioned chocolate and marshmallows, my mind immediately thought of s’mores so that’s the flavor I was going after in making these bars. 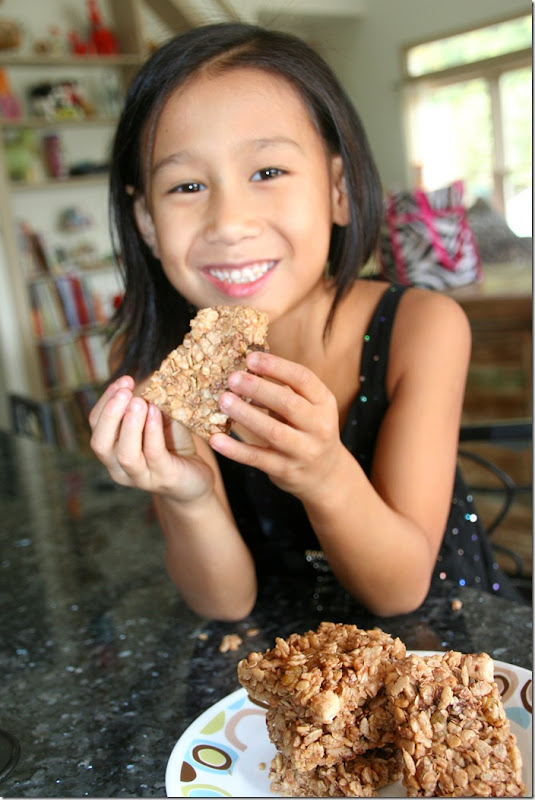 I used what I had in the house, made things up as I went along and in the end I’d say Maisie did a great job with her flavor choices and the bars came together easily as I made them no-bake so super simple to make.  Maisie and Eammon both loved the bars but Maisie did put in a request for next time, more marshmallows and chocolate bits.  We’ll have to see about that one as I tried to keep the “high sugar” items to a minimum but I’ll probably sprinkle the top of the bars with some extra of both next time because if she can see them, she’ll think that there’s a lot more there than there actually is.  In the end, this recipe is a keeper and a great, on the go breakfast or snack for my Maisie. 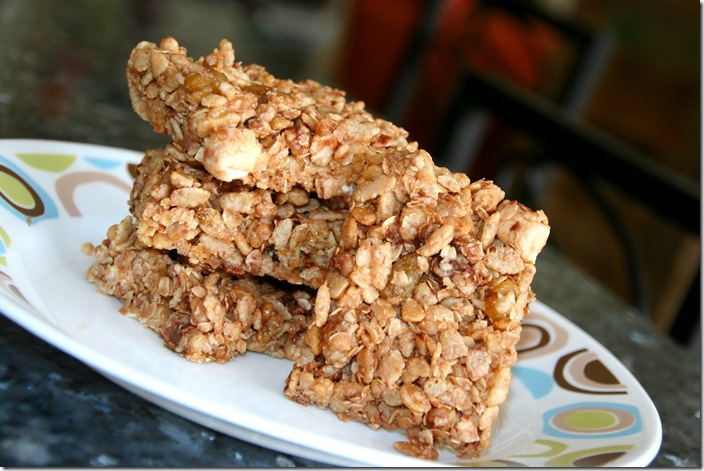 Prepare a 9 x 13 inch baking pan by lining it with aluminum foil and lightly greasing it with either cooking spray or coconut oil.

In a large bowl mix together the oatmeal, Rice Krispies, raisins, chocolate bits, marshmallows and cashews and set aside.  In a microwave safe bowl combine the coconut oil, honey and brown sugar and microwave on high for 1 minutes.  Remove from the microwave and stir to combine then return to the microwave and cook on high for 2 more minutes.  Remove from the microwave a carefully mix.  Pour the hot mixture over the dry ingredients and using a wooden spoon, mix until everything is well combined and the chocolate bits melt.  Add the contents of the bowl to the prepared pan and press the ingredients tightly into the pan.  Refrigerate for at least 2 hours until the bars are set.  Using the foil liner of the pan, lift the entire sheet of bars from the pan and onto a cutting board.  Remove the foil and cut into bars.  Wrap the bars individually in plastic wrap, parchment paper or wax paper and store in the refrigerator until ready to eat.