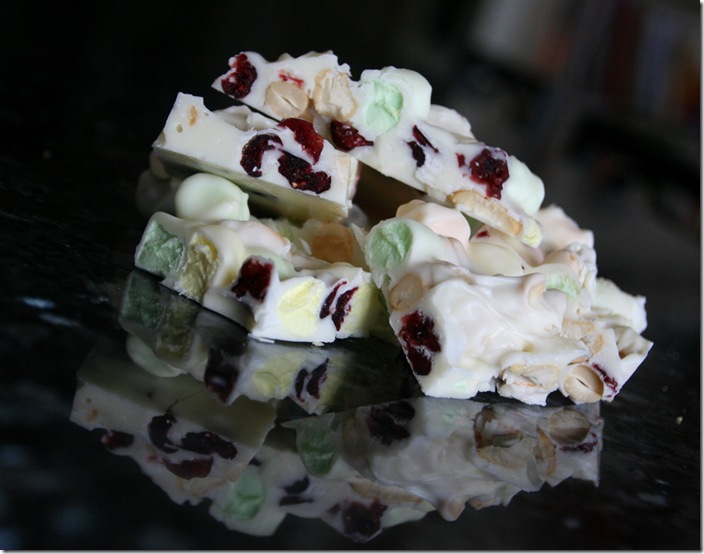 About a month ago I posted the following status on Facebook:  “The older I get, the less I enjoy, crave or even want chocolate. What's up with that?”   Most people commented that I must be sick or crazy and stated that they had the complete opposite problem.  I honestly don’t know what it is with me but I just haven’t been in a chocolate mood.  So when I saw that this month for the Improv Cooking Challenge our hostess Kristen of Frugal Antics of a Harried Homemaker asked the participating bloggers to make any recipe of their choice using the two given ingredients of chocolate & marshmallows, I have to say, I was uninspired.  Though I could think of a way to use chocolate in a savory recipe, like my Fruit & Nut Turkey Chili, I just couldn’t work the marshmallows into anything savory.  I looked through dozens and dozens of sweet recipes and though lots of them looked interesting and good, they just left me cold and I couldn’t be bothered to make them.

I almost decided to skip the challenge this month but I’ve been participating in the Improv Cooking Challenge for the past 14 months and I just didn’t want to break my streak.  In the end I decided to make a simple candy bark in flavors that Eammon would love and using ingredients that I had in the house.  Eammon adores both milk and white chocolate and as I had white in the house, that was the way I went.  I always keep marshmallows in the pantry as Maisie loves them as a little treat and as I was using white chocolate I decided to use the pretty pastel colored ones.  I also wanted something crunchy and chewy in the bark so after a raid on the panty, I chose to add some cashews and dried cranberries. 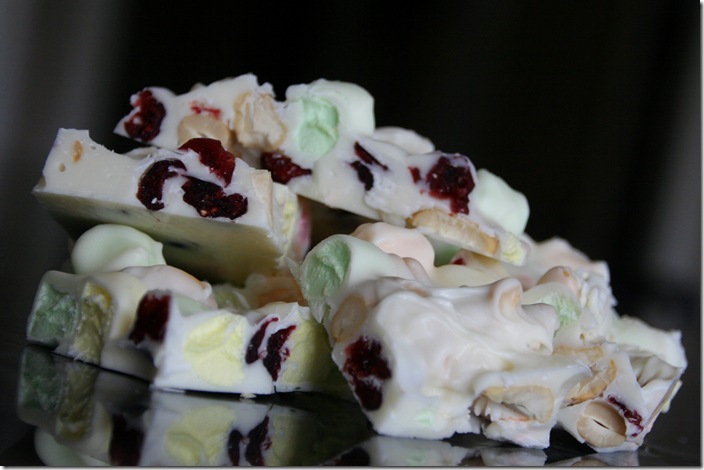 Prepare a baking sheet, covered with either a Silpat, or aluminum foil.  Slowly and carefully melt the white chocolate either in a double boiler or in the microwave being careful not to scorch the chocolate.  Once the chocolate is melted and smooth, mix in the marshmallows, cranberries and cashews and immediately pour onto the prepared pan.  Spread and smooth the mixture as needed.  Refrigerate until the chocolate is set and then either cut or break into pieces.