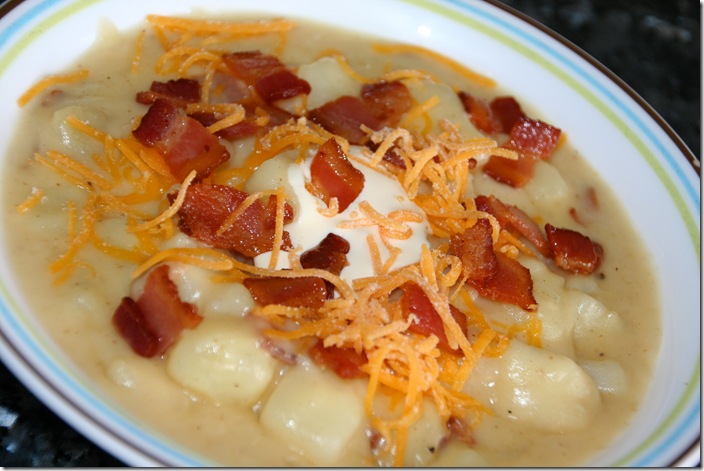 It’s Secret Recipe Club time and this month I was assigned the blog Cupcakes with Sprinkles which is written by Meghan, a sweets loving, cooking and crafting Mama to two cutie-patootie little girls.  So I know you’re scratching your head thinking Cupcakes with Sprinkles and a sweets loving Mama and here I am posting a recipe for Loaded Potato Soup???  Well I had just done a whole slew of sweet treat baking as I was sending a care package off to a friend’s daughter who’s away on her mission for the next year, so here in the Cook Lisa Cook home we were sort of sweet treated out.  Also, about a month ago we were out for dinner and Eammon ordered loaded potato soup and just adored it and had asked if I would try to make some at home for him, so when I saw Meghan’s loaded potato soup recipe I knew what I’d be making.  Trust me though a number of her sweet treat recipe have been saved to make in the future.  I mean check these out and I know you’ll be adding them to your list of recipes to make:  Boston cream pie, one of my all time favorites, white chocolate mousse torte for my white chocolate loving husband and Avalanche Bars which I know I’ll be making one day soon with Maisie.

The day that I made Meghan’s soup was a cold day here in Georgia so it was a perfect & delicious meal.  I’m not even going to mention how much of the pot Eammon consumed in just one day but I’ll put it to you this way, I have already made this soup again and seeing how much Eammon especially loved it the first time, I was smart and made a double batch the second time around.  Oh and here’s something amazing and almost unheard of, other than adding a bit of salt, I changed nothing in Meghan’s recipe…yes amazing for the cook who is always tweaking and changing recipes.  Oh and when I say I didn’t change anything, I mean even the second time around, this recipe is just absolutely perfect and I hope you’ll give it a try…but make a double batch, trust me on that one! 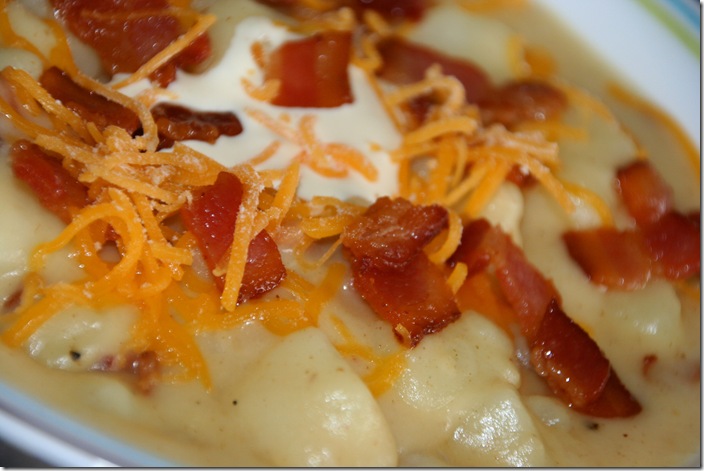 In a large stock pot, cook bacon until crisp. Remove and set aside. Keep the bacon grease in the pot and add the onions, cook until tender.  Leave the onions in the pot and add the potatoes and chicken broth. Bring to a boil, reduce heat and simmer until potatoes are tender. With a slotted spoon remove about a cup of potatoes. Place in a bowl and mash with a fork. Set aside.

In a small sauce pan melt the butter. Stir in the flour and cook for 2 minutes on med-low. Whisk in the milk, turn up the heat and bring to a boil. Simmer until thickened.  Slowly stir the milk mixture in to stock pot of potatoes. Bring to a boil, reduce heat and simmer. Stir the bowl of smashed potatoes back into pot.  Add 1/2 cup of the shredded cheese and three-fourths of the bacon to the pot. Add pepper and salt to taste. Stir to combine. Cook an additional 5 minutes.

To serve, ladle the soup into bowls and top with some shredded cheese, bacon and sour cream.