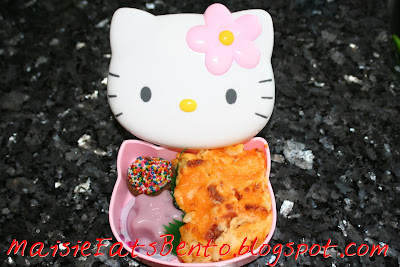 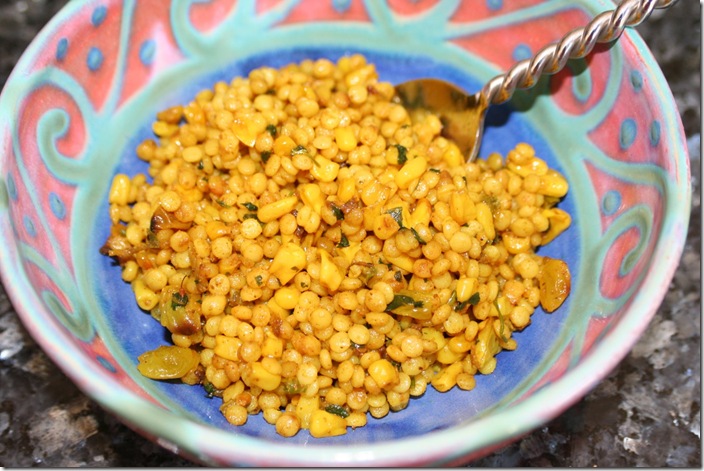 Prepare the couscous according to directions on bag, but substitute low sodium chicken or vegetable broth for the water. Once made, transfer couscous to a large mixing bowl and set aside.

In a separate saucepan, heat oil and add onions, jalapeno peppers, raisins, corn and curry powder. Cook 5 minutes on low heat, stirring often. Add salt and pepper to taste. Cook until heated through. Pour the curry mixture over the couscous. Stir well. Add the chopped cilantro. Toss well. Serve at once or chill for use later. Personally, I think it tastes best the second day, served cold, after the flavors have all had time to really come together. 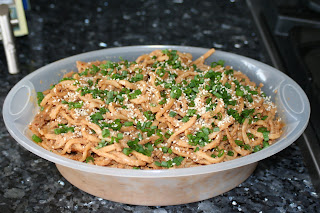 Purée first 9 ingredients together in a food processor until smooth, about 2 minutes, then transfer to a large bowl.

Cook pasta in a 6-to 8-quart pot of boiling water until tender. Drain in a colander, then rinse well under cold water. Add noodles, scallions and sesame seeds to dressing, toss to combine and serve immediately.

Do not mix noodles and dressing together too much ahead as it will get thick and gloppy (is that a word??). You can make the dressing ahead and set aside. Make the noodles, making sure to rinse really well and then store them in a ziplock bag with a little water added to keep them loose. When ready to serve, drain off the water from the noodles and toss with the dressing, scallions and sesame seeds.

Once chicken is cooled to room temp., remove it from the broth and dice. Toss with enough bbq sauce to medium coat the chicken.

In a bowl, mix together the shredded cheese, diced peppers, diced green onion and minced onion.

Lay out the tortillas and divide the chicken mixture between the six tortillas spreading it out on one half of each tortilla. Cover the chicken with the cheese mixture and then fold over the tortilla to create a half rounds. Using a large fry pan, spray with cooking spray and over medium heat cook each of the quesadillas until golden brown on both sides. (When the first side of my quesadilla is cooking, I lightly spray the uncooked side with cooking spray so that when I flip it over, there is some fresh cooking spray to help with browning.)
Posted by Lisa~~ at 8:26 PM 1 comments

BBQ sauce (I use K.C. Masterpiece Original)
1 pkg of 8 refrigerated original biscuits (don't get the flaky layered ones as they don't make good sandwiches)

Bake the biscuits according to the package directions and then slice so that sandwiches can be made.

Once chicken is cooled to room temp., remove it from the broth and shred it. In a skillet, toss the the chicken with enough bbq sauce to medium coat, heating until hot. Divide the chicken between the 8 biscuits making sandwiches.

*Deb served these at our Christmas play group luncheon and though I don't know exactly how she makes them, I'm guessing this is pretty close if not the same.
Posted by Lisa~~ at 8:20 PM 0 comments