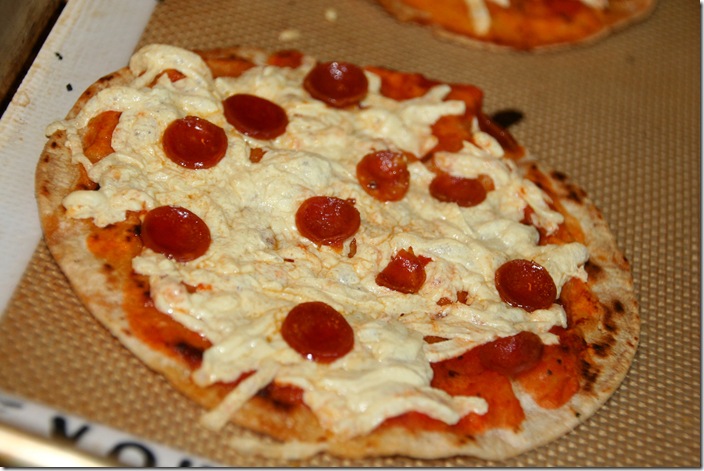 Sometimes I make Maisie “safe” pizza dough and I try to keep some in the freezer but when I run out and time is short, I make “safe” gluten, egg & dairy free pizzas fast and easy using white corn tortillas.  Recently Maisie has said that she actually prefers these pizzas to when I make gluten-free dough so these may become her standard go-to pizza.  I’ll tell you, they are so simple, I’m happy not to make dough and the speed at which these can be made versus waiting for my dough to rise…well no comparison. 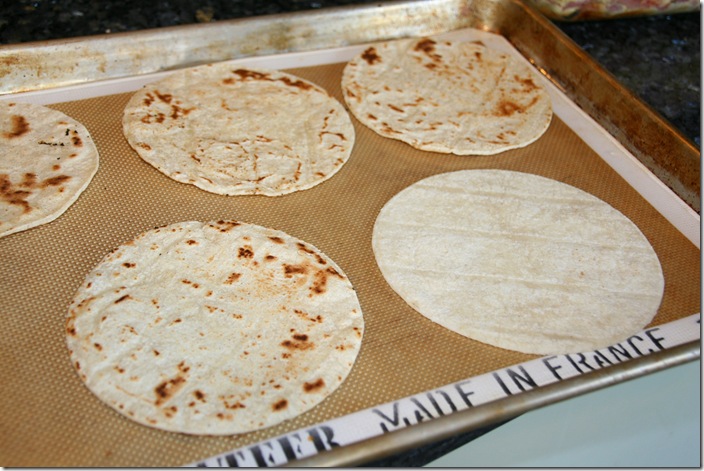 I lightly toast the tortillas in a dry cast iron skillet, on both sides, until they are just a bit crispy.  You can see the difference between the toasted and the uncooked tortilla. 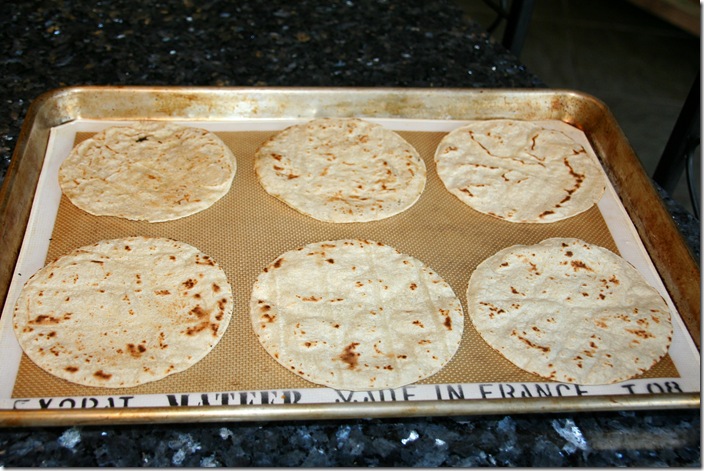 I then lay the tortillas on a baking sheet lined with either a Silpat, parchment paper or aluminum foil. 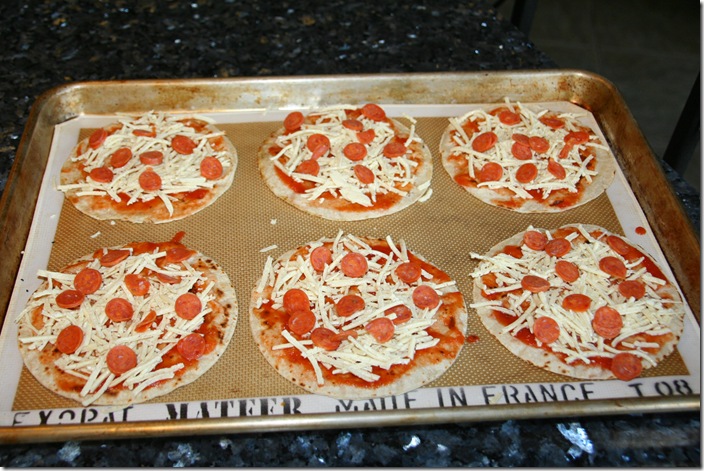 I add Maisie’s favorite toppings and then it’s into the broiler to quickly bake the toppings on to the crust. 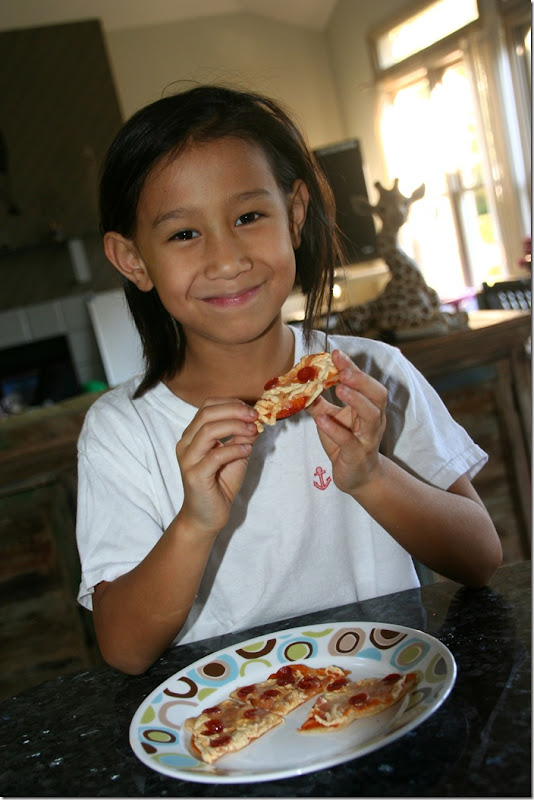 A delicious and “safe” pizza for my girl. 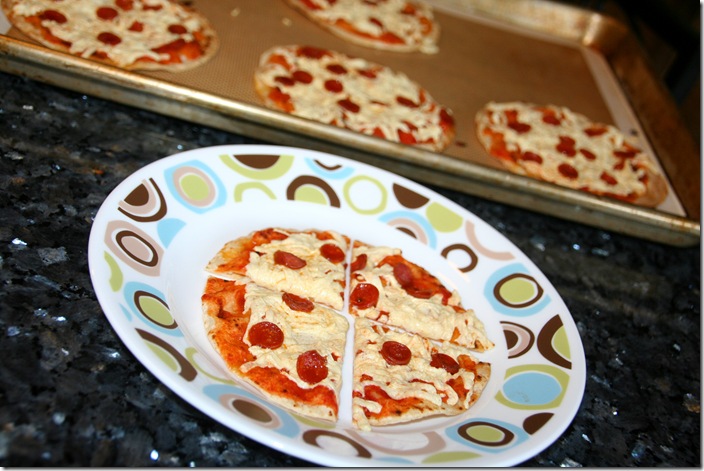 Heat a large cast iron skillet and lightly toast both sides of the tortilla.  Lay the toasted tortillas on a baking sheet lined with either a Silpat, parchment paper or aluminum foil.  Add light toppings* to the tortillas.  Place the pan of pizzas under the broiler and allow the cheese to melt, watch carefully as it only takes a couple of minutes.

* If you add meats and vegetables, they need to be fully cooked as they are really only warmed when the pizza is put under the broiler.

Servings:  Maisie generally eats 2-3 pizzas for a meal.  I layer the leftover pizzas with wax paper or plastic wrap between them, wrap and refrigerate.  To reheat, I arrange the slices on a plate and microwave just until hot.  The pizzas can also be reheated in a cast iron skillet, this re-crisps the bottom of the pizza. 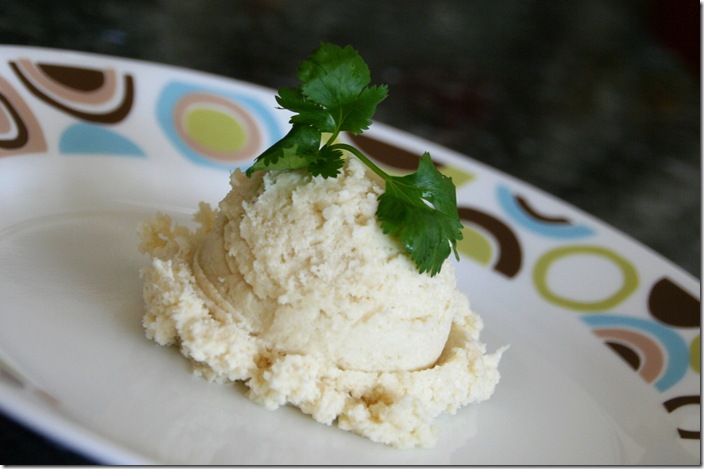 Years ago I made cauliflower mashed “potatoes” all-the-time and adored them.  I remember making all sorts of varieties and I looked forward to trying all the variations and I always enjoyed them, but for some reason I just stopped making them and I haven’t had them in years.  A few months back I wasn’t feeling great, my stomach was bothering me and my doc recommended eating soft, pureed type foods and one of the suggestions was mashed potatoes.  Though they sounded good, I’ve been trying to avoid carbs so they just weren’t calling my name but then I remembered my Cauli-Mash of the past and instantly I had the craving and knew it would be perfect.

Such wonderful memories and my Cauli Mash was just as delicious as I remembered.  The ones I made and photographed were pretty basic but at the bottom of the post are a few of the variations I used to make and now that I have “found” my recipe, I’ll be making these again and again. 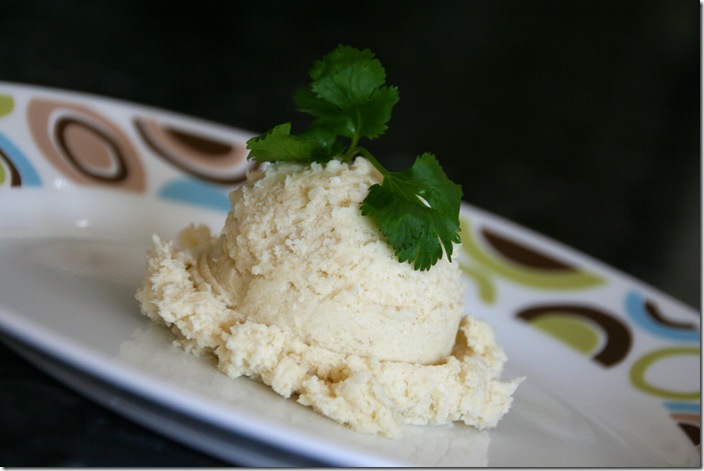 Prepare one recipe of Cauli-Rice and cool slightly.  Place the Cauli-Rice in a cloth tea towel (not paper towels as there is too much liquid and they are not strong enough) and wring out as much of the liquid as possible, pushing and twisting on the ball of Cauli-Rice.  In a small microwaveable bowl, heat the heavy cream and butter, until the butter is melted.  Add the warm butter/cream mixture, the wrung out Cauli-Rice and the shredded cheese  to the bowl of a food processor and process until smooth.  Add salt and pepper to taste. 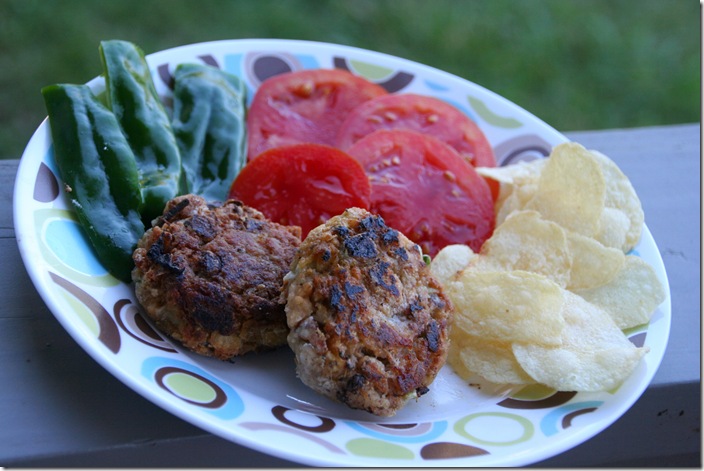 I can’t believe that I almost missed this month of the Improv Cooking Challenge as I just have not been able to get my act together lately;  I just seem unable to sit down at the computer and actually blog.  Life has been busy and come night time, I just haven’t been in the mood to open up my laptop.  Not only have I been neglectful on this blog, but also on our family blog, Moments with Maisie.  I mean seriously, it took me a month and a half to post the pictures from our recent transatlantic cruise and time in Barcelona.  My posting was so slow that friends and family called and emailed to see if we were okay because it took so long to post!  Well today I’m making up for it… a bit.  A catch-up post on Moments with Maisie and finally, a new recipe here.

This month for the Improv Cooking Challenge our hostess Kristen of Frugal Antics of a Harried Homemaker challenged the participating bloggers to make any recipe of their choosing using the specified ingredients of fish & chips!  She actually opened the scope of the challenge quite a bit as items like Swedish fish and chocolate chips could be counted as valid challenge fish and chip ingredients.  I thought about going the sweet route but in the end decided to go savory, a bit more traditional fish & chips…but with a twist.

Now if I made traditional English fish & chips, well Eammon would be all over that one considering that he’s from London and next to Chicken Tikka Masala, it’s his fave!  I enjoy a good fish & chips dinner once in (rare) while but Maisie with her allergies, well it’s not something that she ever eats because I don’t deep fry and when we’re out, it’s not Maisie “safe”.  I thought about topping a nice piece of fish with some potato chips but as I did something similar for the July challenge with my Fritos Crusted Pollock, I needed something a bit different.

I was looking in the freezer and saw that I had crabmeat and Maisie’s been on a salt & vinegar potato chip kick lately, and it hit me… crab cakes made with salt & vinegar chips.  I knew that Maisie would love them as would Eammon, I mean fish, potato and vinegar…well yum!

And well YUM these were, and easy too!  They are Maisie “safe” as they don’t contain wheat, egg or dairy like traditional crab cakes but instead use a combination of chia seed and flax seed as the binders.  The crab cakes were simple and the flavor of the crab was the star with hints of the potato chips.  I served the crab cakes simply with fresh from the garden peppers and tomatoes and an extra serving of salt & vinegar chips.  A delicious and healthy fish & chips meal which was a huge hit with all of us in the Cook Lisa Cook home. 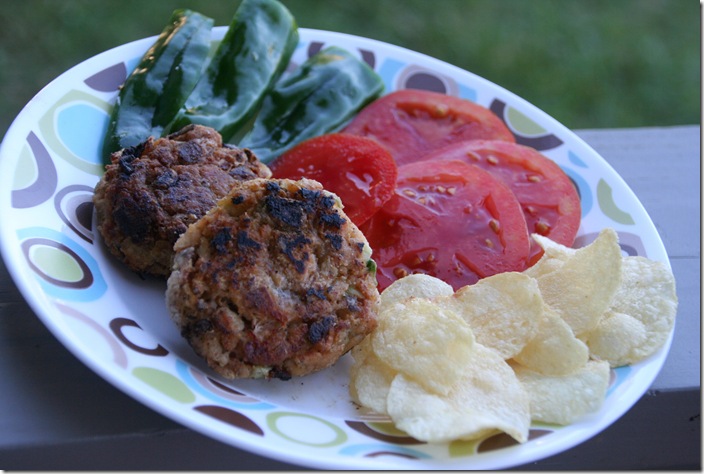 Over medium-high heat, heat a large cast iron skillet and add just enough oil to coat the bottom of the pan.  When the oil is hot, carefully place the crab cakes, in batches, into the pan and fry until browned and then carefully flip the crab cakes and fry on other side until golden brown.  Serve hot, plain, with some malt vinegar or sauce of your choice. 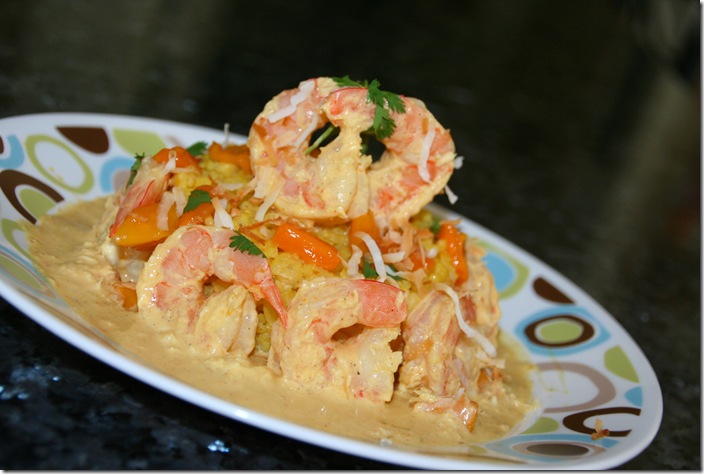 It’s Secret Recipe Club time again and after missing last month because we were away for a few weeks on a transatlantic cruise, it’s great to be back!  This month I was assigned the Chef & the Lucky Wife’s blog, The Saturday Evening Pot.  As always I was excited to get my assignment and as usual, it was terribly difficult to pick a recipe to make and feature.  In the end it came down to Maisie and my wanting to make a meal that she would eat and love.  Maisie adores shrimp and rice so the Chef’s Paradise Shrimp over Jasmine Rice had all the makings of a meal that we all would enjoy and it was Maisie “safe”, no wheat, egg or dairy.

I did of course make a few little changes to the Chef’s recipe because when do I ever make a recipe as written?  First off I changed the rice from Jasmine Rice to Saffron rice, just because that’s what Maisie requested.  In the Chef’s recipe he uses mango juice and mandarin oranges but I had some fresh mangoes in the house so I skipped the mandarin oranges and just used the fresh mango in its place.  I also decided to add a bit more spice to the recipe by upping the allspice and adding some hot Jamaican curry powder.  My final little ingredient change was that I used cilantro instead of parsley, because that’s what I had in the house, and I added a bit of toasted unsweetened coconut as a garnish.

The meal was loved by all of us and even using the hot Jamaican curry powder, there was just the slightest kick, not too spicy for even Maisie.  For something even less spicy use regular Jamaican curry powder or, check out the original recipe over on the Chef & Lucky Wife’s blog. 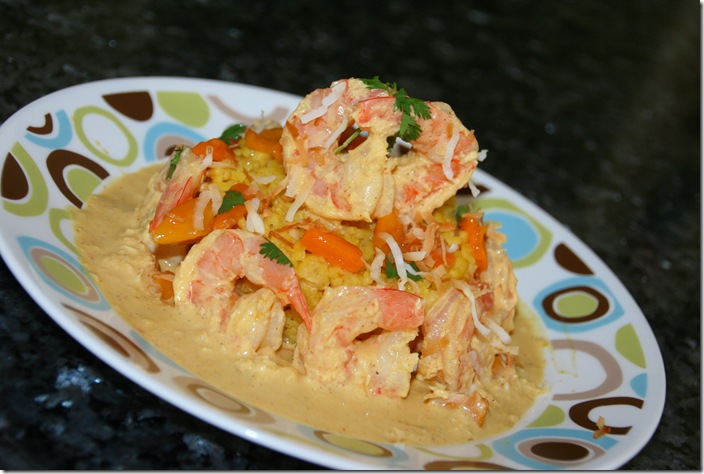 Cook rice according to package directions and set aside.

Peel and de-vein (if necessary) shrimp, keep cool, and set aside.   Heat a 10-inch covered, deep skillet over medium heat.   Add the olive oil. Once the oil is hot, add the onion and sauté lightly, until the onion is softened but not browned.  Add the allspice & curry powder and continue cooking for approximately one minute, stirring continuously, until fragrant.  Turn heat to low and add the coconut milk, mango juice, pepper & salt.  Stir to blend well and bring the poaching mixture to a simmer.

Portion the rice onto 4 plates and top with the shrimp.  Add the thickened poaching liquid, diced mango, cilantro & toasted coconut.