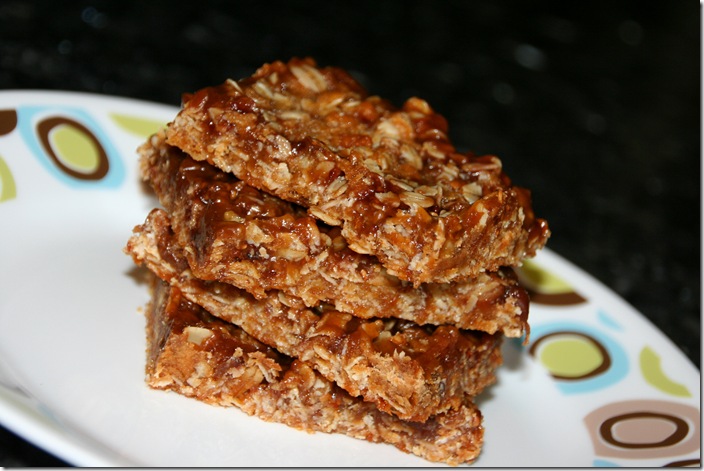 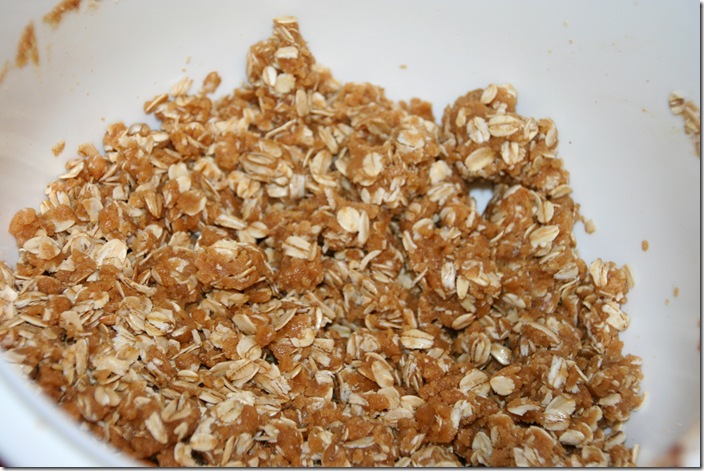 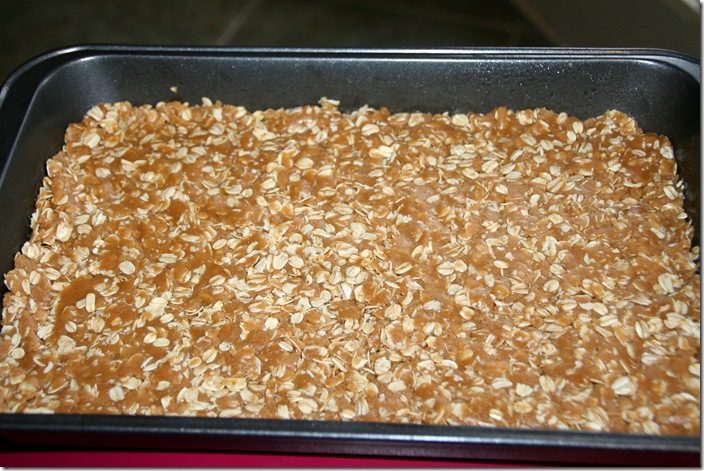 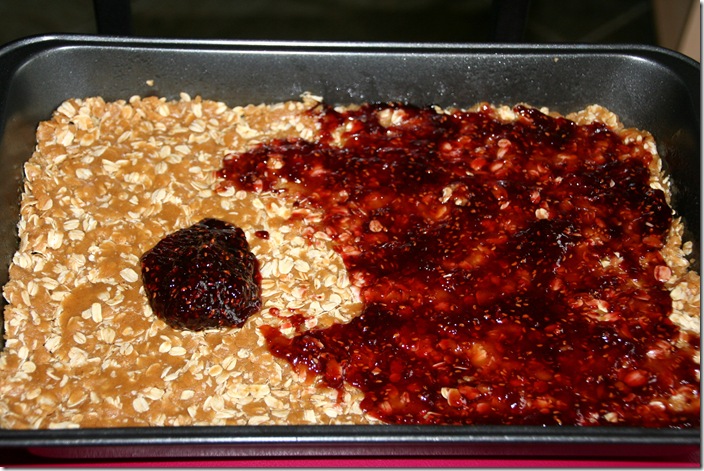 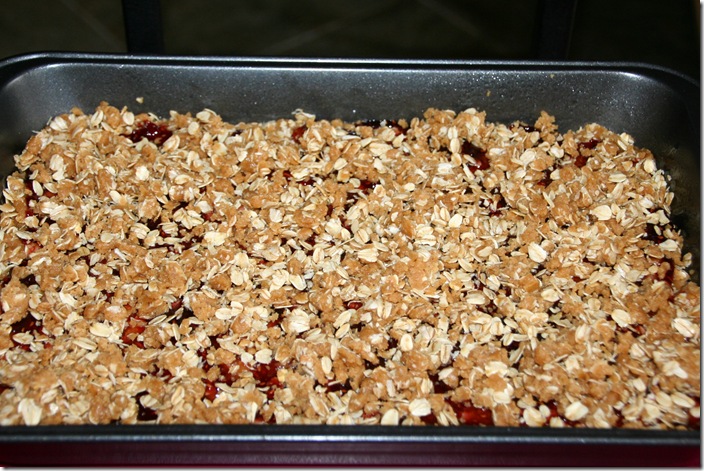 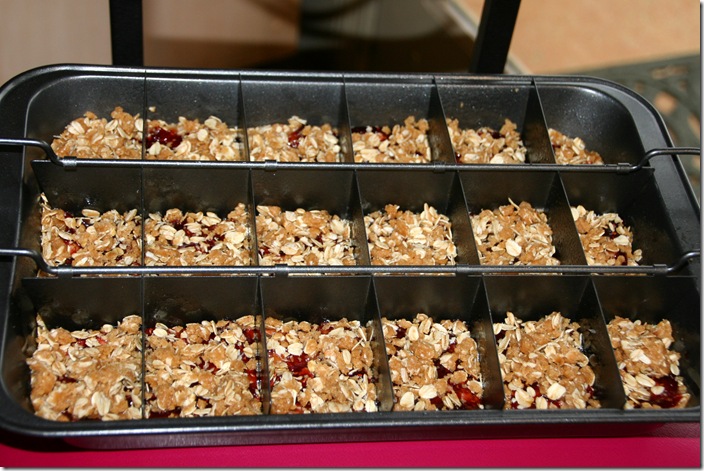 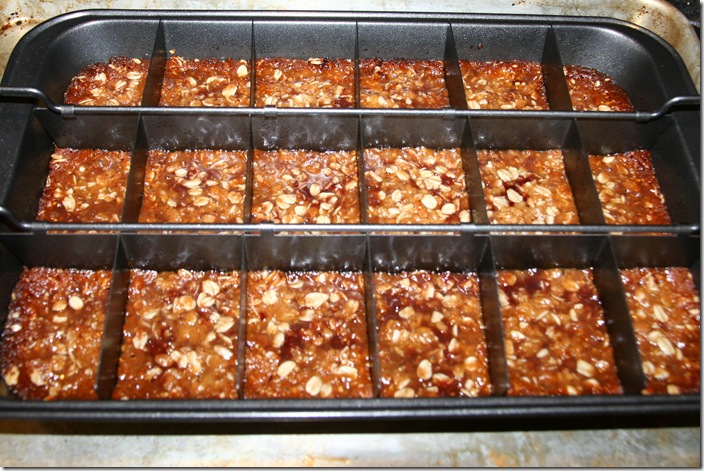 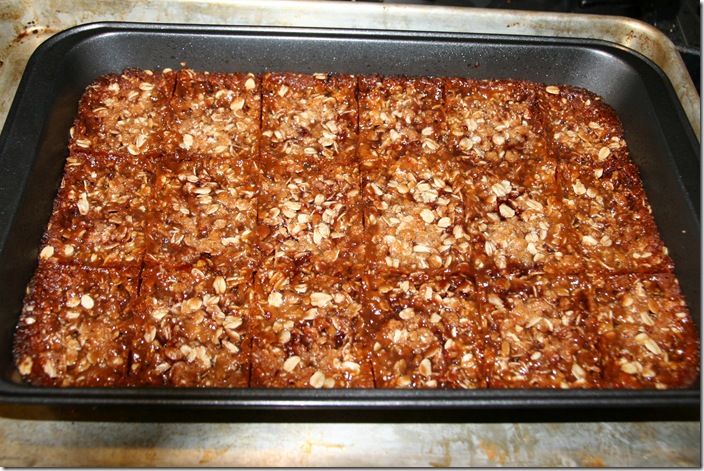 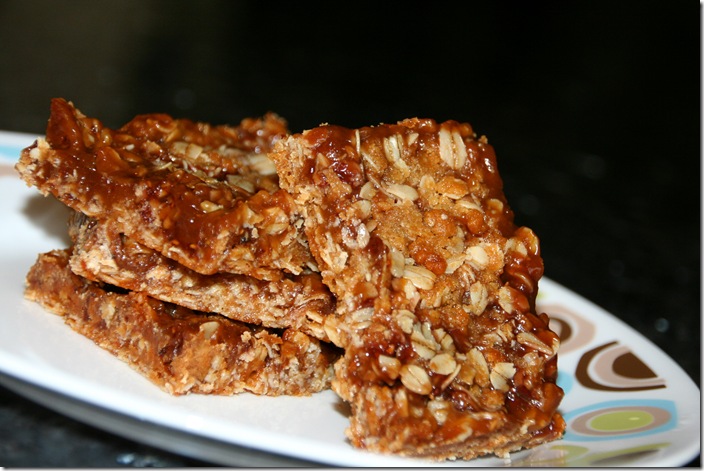 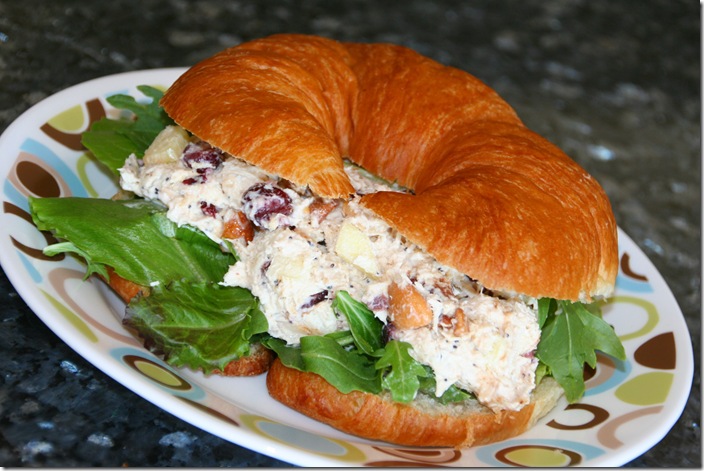 I was very excited this month when I received my Secret Recipe Club assignment as I was assigned Amy’s A Little Nosh, a blog which I have followed for a long time and one where, when I have my act together, I participate in her weekly Tastetastic Thursday blog hop.  Since I’ve been a long time reader of Amy’s blog it didn’t take me ages and ages to find a recipe that I wanted to make as I already had a few of hers saved in my “need to make” file.  For some reason most of the recipes included using chicken like her Spicy Honey-Brushed Chicken Thighs, Sweet and Sour Chicken and the one I chose to make, Amy’s Chicken Salad.  Part of the reason I chose Amy’s Chicken Salad was, I was asked by Maisie’s gym to make lunch for the judges at a gymnastics meet the gym was hosting and they happened to request chicken salad on croissants so what better time to try out a new recipe. 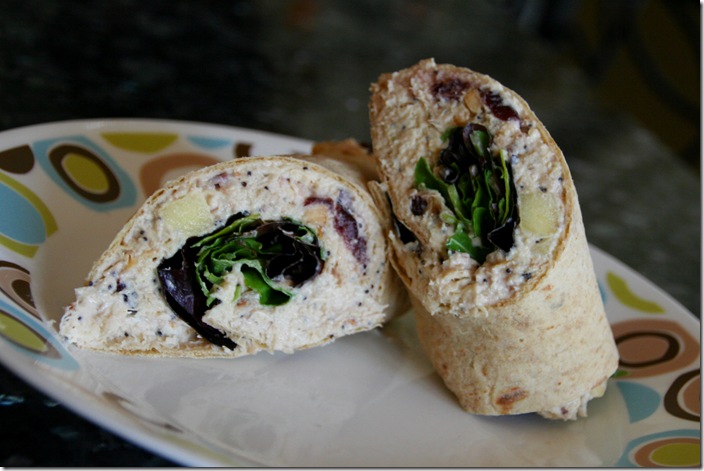 One thing that I really liked about Amy’s recipe was that she made it sound adaptable to whatever added ingredients you’d choose to include.  I have to say that this chicken salad was the hands down best chicken salad I’ve ever eaten and it only got better the second day once all the flavors really came together.   I really loved the sweet little bites of apple and cranberry and the little added cinnamon crunch of the cashews was always a nice surprise.  The combination of yogurts, sour cream & mayonnaise gave a creamy richness and because I used some honey yogurt, just a touch of sweetness.  This is now my go-to chicken salad recipe and I know that this summer it will be served time and time again in wraps, sandwiches and atop salads. 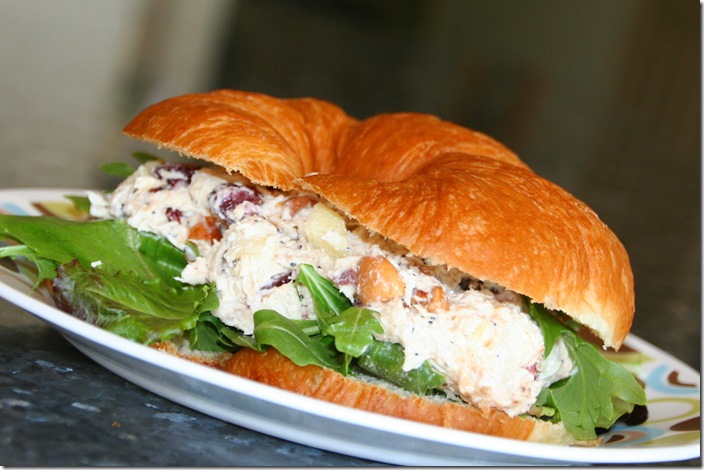 In a large bowl mix the yogurts, sour cream and mayonnaise together.  Add the chicken, dried cranberries, apple, cinnamon cashews and poppy seeds and mix together.  Enjoy immediately or for even better flavor, cover and refrigerate overnight. 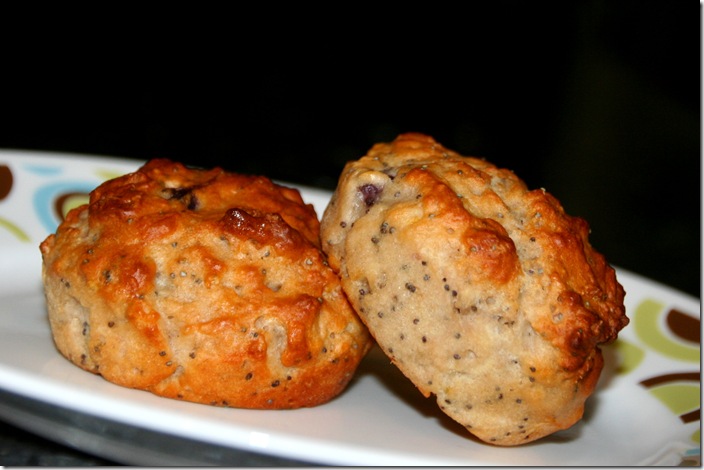 I seem to have an addiction, but it’s not what you might think.  It’s not to muffins, blueberries or even to my much adored lemon, it’s an addiction to my monthly recipe challenges, The Secret Recipe Club, The Improv Cooking Challenge and today’s Crazy Cooking Challenge.  Here’s why I say that I have an addiction… The way that the Crazy Cooking Challenge works is that each month there is a dish that our hostess Tina, of Moms Crazy Cooking challenges the participating bloggers to make.  We all go out searching non-celebrity blogs looking for what we think is the ultimate recipe for that dish and once we find it, we make it and then on the same day we do our post featuring the recipe and the blog where it was found.  Well this month we were challenged to find the ultimate blueberry muffin recipe.  Sounds easy enough as the internet is littered with food bloggers who have posted gorgeous blueberry muffin recipes to their blog so finding one is up to what really just suits your fancy.  My problem though is that I’m anaphylaxis allergic to blueberries so as a general rule, I don’t cook with them.  But…BUT… I have participated in the Crazy Cooking Challenge since the beginning and I just couldn’t miss a month, so I was going to make it work. My friend Lisa (yes Lisa is a popular name) is doing Weight Watchers (and doing great at it I might add) and she recently had surgery so while she was recovering I brought her dinner one night.  For her meal I decided to make Slimmed Down Loaded Potato & Buffalo Chicken Casserole and I also wanted to bring her some WW friendly sweet treats.  I decided that her sweet treats would be my blueberry muffin challenge.  Up front I knew that I wasn’t going to use fresh or frozen blueberries but rather blueberry yogurt as I felt it would be safer for me.  I then set out searching the internet looking for my, well really Lisa’s, not me Lisa but friend Lisa’s, ultimate blueberry muffin recipe.  I knew that the recipe I would choose needed to include yogurt and because of Lisa’s diet I wanted to avoid recipes which included a lot of oil, butter or eggs.  In my search I decided to look for recipes which included yogurt (my blueberry addition) and applesauce in place of the fat and as far as the sugar, well that I knew I could easily substitute.  When I happened upon Ruth’s She-Fit.com and her Skinny Lemon Poppy Seed Muffins, well I knew that I had found my recipe.  I’ve heard that lemon and blueberry go fabulously together and with Ruth’s recipe all I had to do was swap out her lemon yogurt for my blueberry yogurt, easy-peasy!!  I held pretty true to Ruth’s recipe just switching out the yogurt flavor and I didn’t bother with the additional sprinkling of Splenda on top of the muffins. 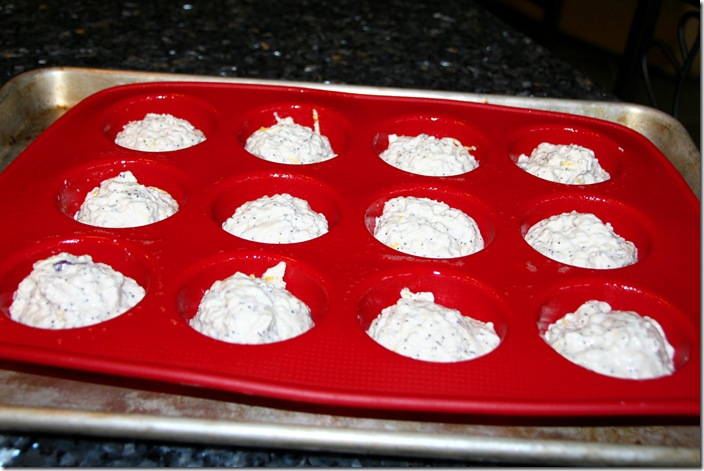 As the muffins cooked the house smelled absolutely delicious and I do wish that I was able to sample one of the muffins but Maisie (because of her food allergies) and I (because of my blueberry allergy) had to just watch as Eammon was our taste tester. The results, both Eammon and Lisa had thumbs up for this recipe and said that even though it’s skinny and healthy you’d never know it as these muffins were moist, tender, delicious and full of flavor.  Sounds like a winner to me! 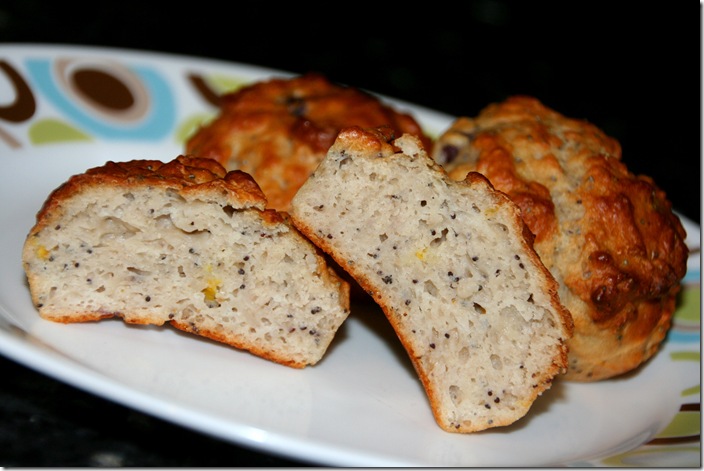 Preheat oven to 350F.  In a medium bowl mix the flour, baking powder, salt, baking soda and Splenda together.  Add the yogurt, lemon juice and applesauce, lemon peel and poppy seeds.  Stir to combine.  This will make a very thick batter.  In a separate bowl whip the egg whites to stiff peaks.  Add the egg whites to the flour mix and fold in.  Spray a muffin tin with non-stick cooking spray.  Using a large cookie scoop place approximately 1/4 cup of batter into each muffin mold.  Bake for approximately 20-25 minutes, until a tooth pick inserted in the muffin comes out clean.