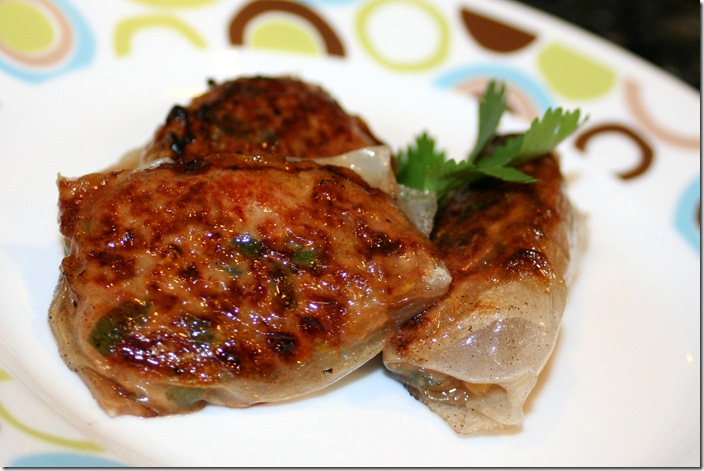 Maisie is my dumpling loving girl and how could I have her celebrate Chinese New Year without her beloved dumplings.  But now with her food allergies to wheat, egg whites and milk, I’ve had to find new ways of making her favorite foods so enter, dumplings made with rice paper wrappers.  I didn’t have to make any changes to my filling recipe, it was only replacing the traditional wheat based dumpling wrapper with the rice paper wrapper.  I couldn’t make traditional shaped dumplings so I tried cigar and rectangular shaped and both worked out well as far as wrapping went.  I then tried steaming the dumplings and though they were wonderful, the wrapper just didn’t want to stay on so I tried pan frying and it was a success.  The dumplings were absolutely delicious and we all love them so these are the dumplings which the Cook Lisa Cook household will be enjoying from now on.  I made a huge tray of dumplings, fried them all up and then on a Silpat lined baking sheet I froze them (don’t allow them to touch one another.)  I then was able to transfer the fully cooked individually frozen dumplings to FoodSaver zipper bags and then I vacuumed out all the air using my FoodSaver .  This way whenever Maisie wants some dumplings I can easily pull out as many as she wants and heat them up and then easily seal up the rest so to keep them fresh and freezer burn-free. 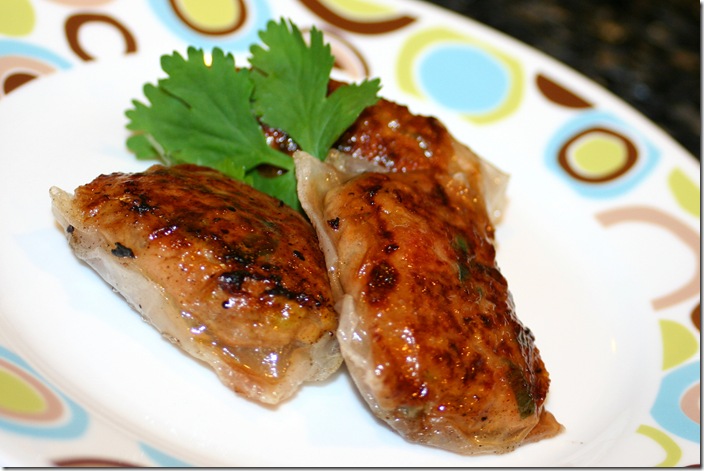 In a large bowl combine the ground pork, shredded cabbage, ginger, scallions, soy sauce, Shaoxing wine and sesame oil and mix well.  To make the dumplings, one by one quickly soak a rice paper round in some warm water until pliable.  Lay the wrapper on a work surface and place some of the pork mixture in the center of the round.  Fold the rice paper around the pork as you would for an egg roll or wrap sandwich.  Lay the wrapped dumpling on a Silpat or oiled parchment paper lined baking sheet.  When ready to fry, heat a very thin layer of peanut oil (or oil of your choice) in a large fry pan.  Fry up both sides of the dumpling until the pork is cooked through and the wrapper is golden brown.

In a pot over medium heat stir everything but the scallion together until the sugar melts and then allow to simmer for 3-4 minutes.  Remove from heat and stir in scallion.  Allow to cool.  Store in an airtight container in the refrigerator.  I have kept this for a month and it's still great.  (I usually double this one as it keeps for so long)