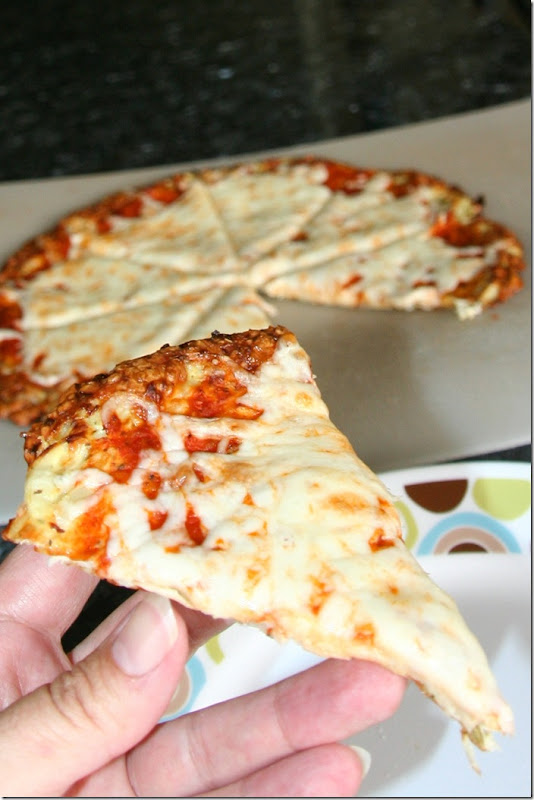 I have been trying to cut out white…you know white stuff like flour and sugar.  So when I saw a recipe on Megan’s blog Detoxinista for her Detoxinista’s Cauliflower Pizza Crust, well I just had to give it a try.  I of course made a few adjustments to her recipe but WOW, this pizza is fantastic and if I never eat a real pizza crust again, I won’t even miss it.  This cauliflower crust is firm, with great flavor, you can cut it like a regular pizza and pick up the slices and eat them with your hands.  This recipe is just downright fabulous and everyone, kids and adults,  who have tried a slice have loved it and couldn’t figure out the secret of the crust.  The only down side of this crust is that this version isn’t Maisie “safe” as it contains both eggs and cheese but I’m going to experiment with it and hopefully come up with a version just as wonderful which she’ll be able to eat. 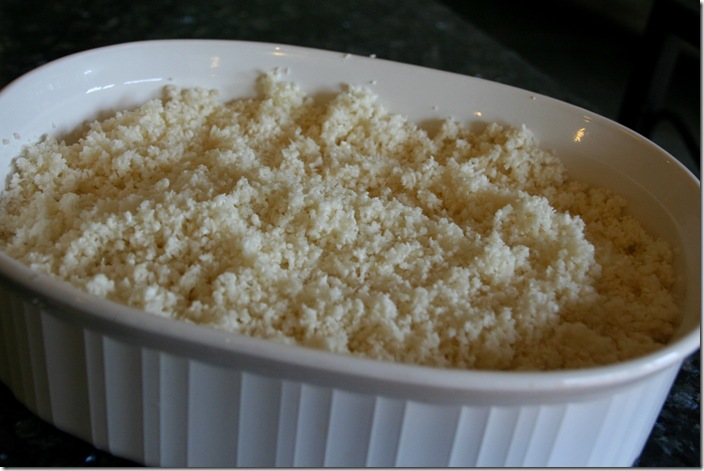 Start with a full head of cauliflower and make a batch of my Cauli-Rice. 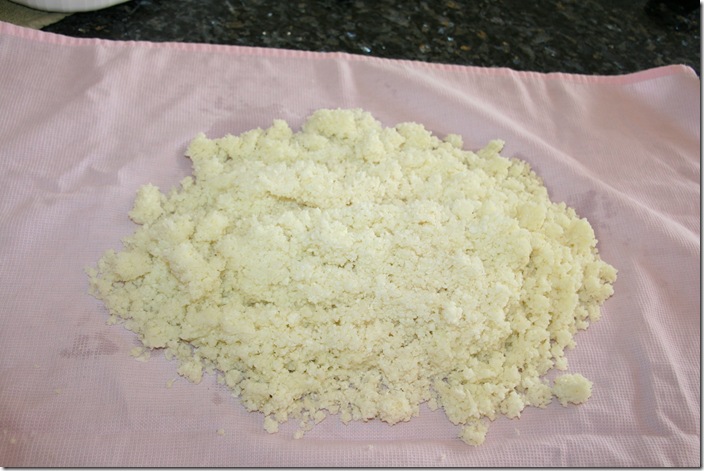 Place the cooked Cauli-Rice on a tea towel and roll it up then squeeze out as much of the water as possible…and I mean really, really squeeze as you want it as dry as possible. 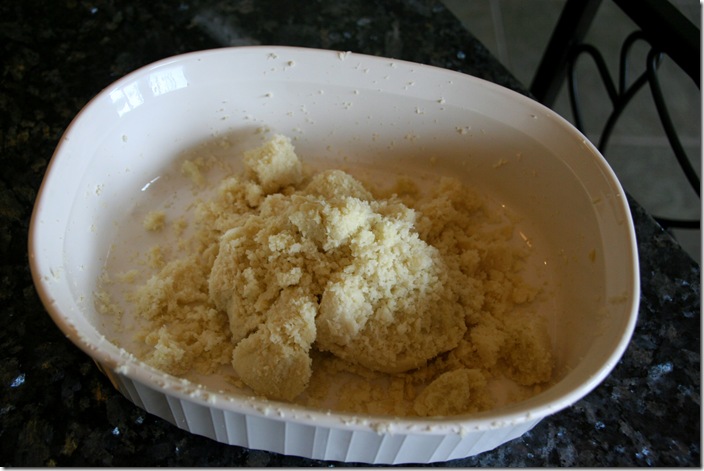 After you squeeze out all the water there will seem to be a lot less Cauli-Rice but for the crust to bake up nice, firm and chewy you need to have the Cauli-Rice as dry as possible. 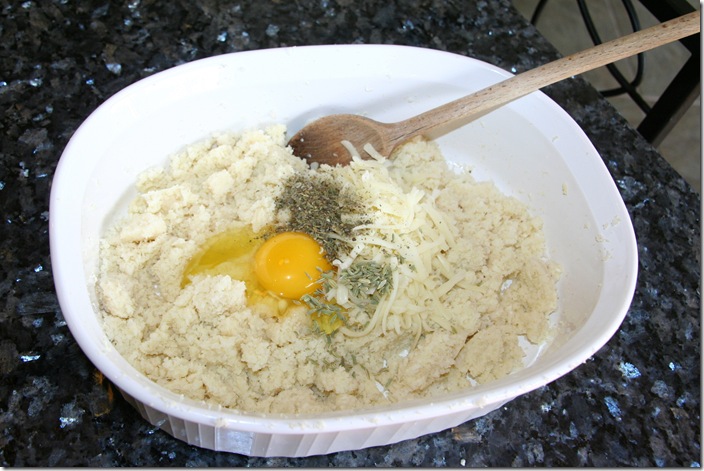 Add the egg, cheese and spices. 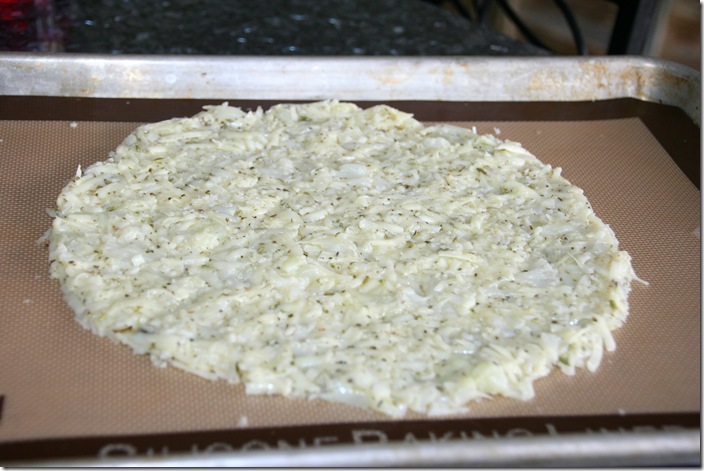 Spread the cauli crust onto a Silpat or parchment paper lined baking sheet. 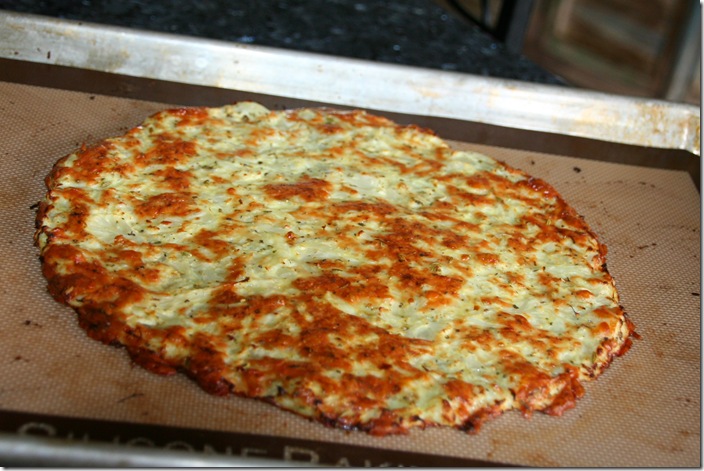 Bake until the crust is firm and turning golden. 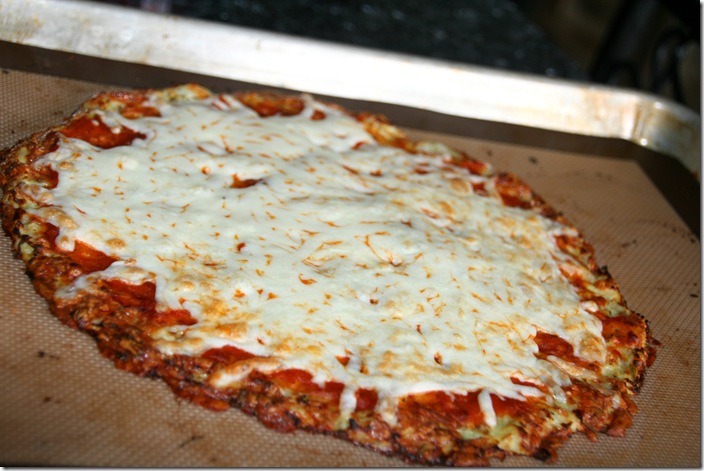 Add a layer of sauce and shredded cheese and after a few minutes under the broiler it’s pizza time! 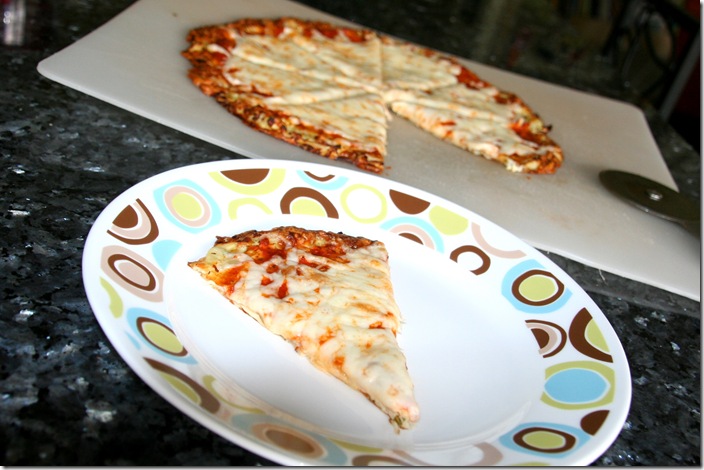 Preheat oven to 450F.  Line a baking sheet with either a Silpat or parchment paper.

Place the cooked Cauli-Rice into a tea towel and squeeze all the water out of the Cauli-Rice.  It is important to get the rice as dry as possible so that there won’t be extra moisture in the crust which will prevent it from crisping up properly.

In a medium bowl combine the dry Cauli-Rice, egg, 1/3 cup shredded mozzarella, fennel seeds, Italian seasoning, salt & pepper and mix to combine well.  Press the cauliflower mixture into an even thickness on the prepared pan, either into a round or rectangular shaped pizza.  I kept the crust pretty thin, about 1/4-inch thick.  Bake for 15-20 minutes until the crust is firm and golden brown.  Remove the pan from the oven and turn off the oven and turn on the broiler and move the rack to up close to the broiler. Top the cooked crust with sauce, cheese and toppings of your choice.  Place under the broiler until the cheese is bubbly and melted

* Meats and veggies need to be cooked before placing them on the pizza as after the crust is baked, the pizza is only under the broiler to melt the cheese, not long enough to properly cook meats and veggies.