Maisie absolutely adores grilled corn and will eat it hot or cold and day after day.  I love using grilled corn in recipes like my Super Simple Summer Shrimp Salsa Salad which I eat all summer long so I generally have extra ears of grilled corn in the house.  The other day I saw a recipe for Bacon & Corn Pudding and I thought with a few minor changes and with using the grilled corn that I had on hand, that it would be a winning recipe for us.

As I was making the recipe I thought that it was quite similar to another recipe that I make, Corn Soufflé and in many ways it is but the taste is completely different.  My Corn Soufflé is creamy and mild in flavor and while not sweet per se, sweeter than this recipe.  By using grilled corn, onion, bacon and cheese, this recipe is much more flavorful.  The corn and onion really stand out and the cheese, though there, just adds to the richness as a background flavor.  The bacon adds a nice smokiness to the dish and a little extra crispness to the top crust.  One thing that is very similar between the two dishes is the overall  they’re both very light and have that soft “pudding like” texture.  This recipe was easy to make, a winner taste wise and pieces reheat beautifully in the microwave so I will definitely be making it again. 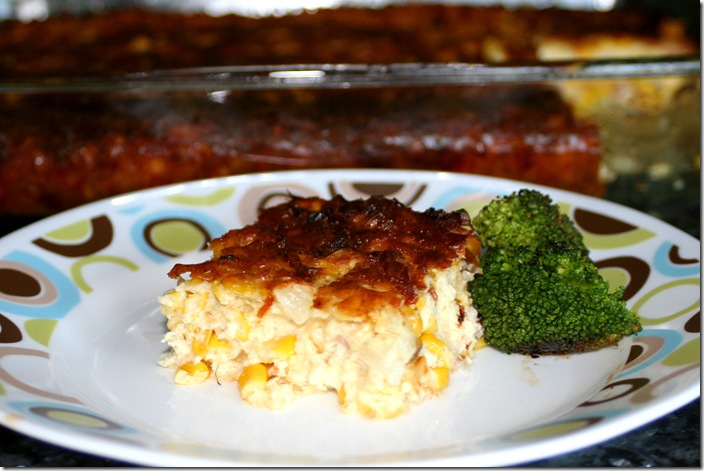 6 large eggs
2 cups half & half (I used fat-free because that’s what I had)
1/2 cup melted butter
2 TBS sugar
4 TBS flour
1 tsp each, or to taste, salt & pepper
4 ears of fresh corn, grilled until some of the kernels are charred and then kernels sliced from the cob (I used bi-color corn)
1 medium Vidalia onion, minced (or other sweet onion)
1 cup shredded cheese (I used Fiesta blend cheese because that’s what I had on hand but cheddar or Colby Jack could be used.)
6 slices pre-cooked bacon, julienned (divided 4 slices & 2 slices)

Preheat oven to 350F. Mix together the eggs, half & half, melted butter, sugar, flour, salt and pepper.  Once fully blended add the corn kernels, minced onion, shredded cheese and the 4 slices of julienned bacon.  Stir to blend and then pour into a 9-by-13-inch baking or casserole dish.  Top the mixture with the 2 remaining slices of julienned bacon.  Bake for approx. one hour or until golden brown. Once removed from the oven allow the pudding to stand for at least 10 minutes before serving so the pudding can set up well. Email ThisBlogThis!Share to TwitterShare to FacebookShare to Pinterest
Labels: Bacon, Corn, Side, Vegetable