After our recent cruise we decided to make the drive home via Savannah and take a little detour for a great dinner at Uncle Bubba’s Oyster House.  We’ve never been to Savannah but I had heard wonderful things about the restaurant so we gave it a try and all of our meals were wonderful.  Maisie had the children’s fish fingers which was some of the best fish & chips I’ve ever had, Eammon enjoyed a meal of perfectly blackened scallops and I, the northerner who has never acquired a taste for grits decided to order the Shrimp & Grits because I had heard such great things about the dish.  All I can say is WOW, am I ever glad that I decided to give grits another try and get this dish because it was off-the-charts wonderful.  I will say that it was also off the charts rich so I ended up bringing most of it home but it sure made a great late night snack after the long drive and what was left after my snack was just as delicious eaten cold the next morning for breakfast.  I really loved the dish so I had to look it up on line to see if I could find it and as luck would have it, it’s this month’s featured recipe on Uncle Bubba’s website so I was happy and it must have been meant for me to get the recipe.

Honestly though, between all the butter, bacon and heavy cream of course this dish would be wonderful but I’ll tell you, it was worth every.single.fat calorie!!  I will be making this dish down the road but I first need to do a bit of detoxing from a week of cruise food, sugar & excess topped off by Uncle Bubba’s Shrimp & Grits. 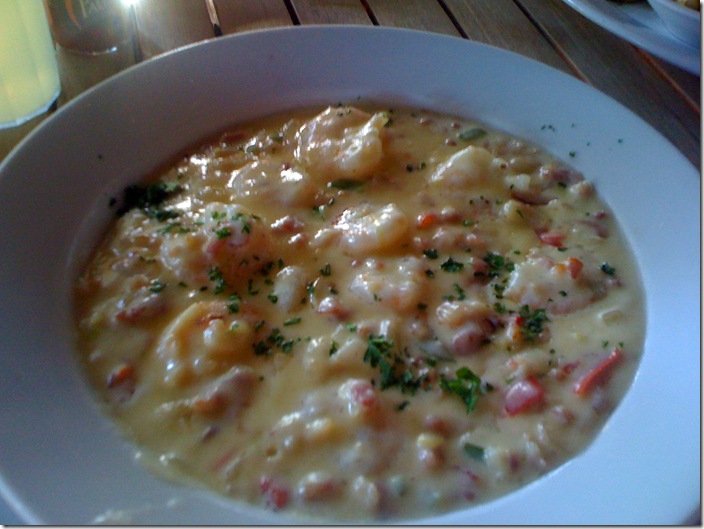 In a medium saucepan on medium-high heat, bring 6 cups water, the butter, and salt to a boil. Slowly whisk in the grits. Continue whisking occasionally for about 5 minutes, until the grits are thick and tender. Remove from the heat and keep warm.

For the gravy, sauté the bacon in a large heavy saucepan over medium-high heat until the fat is rendered. Stir in the onion, peppers, leek, and garlic and cook until soft. Add the shrimp and stir to combine. Sprinkle in the flour, and stir, making sure all the flour is well incorporated. Add the wine and cream, stirring well until the sauce has thickened. In a small bottle or bowl, mix the salt, pepper, and garlic powder and season the gravy to taste.

Serve the shrimp gravy over grits.