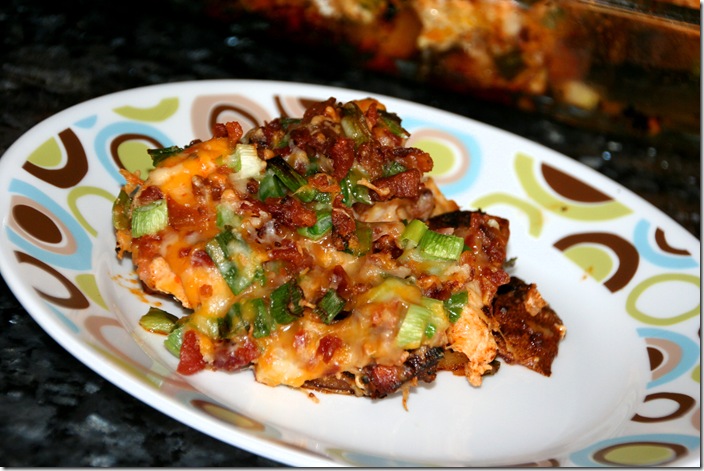 This is my sixth month participating in the Improv Cooking Challenge which is hosted by Kristen of Frugal Antics of a Harried Homemaker.  As always I looked forward to participating and finding or coming up with a great recipe which included the two theme ingredients.  This month the participating bloggers were asked to make any recipe of their choosing using the two given ingredients of potatoes & cheese.  I knew immediately what I was going to make as this recipe has been a favorite in our home for a few years and as I haven’t made it in ages nor have I ever posted the recipe to my blog, well it was time to make it.  Back the end of 2006 when we first brought Maisie home, not only was I very sick but she wanted no part of me putting her down or leaving her so that I could cook.  Because we still needed to eat, I started going one night every month or so to one of those kitchens where in two hours you partially prepared twelve meals and then you brought them home to your freezer.  When dinner time would roll around all I would have to do was take my prepared items and quickly cook them.  It was nice because we were eating real food that I had previously prepped, but at home I had virtually no clean-up and my time in the kitchen was mere minutes. This recipe was inspired by one of the meals I once prepared in that kitchen but through the years I’ve changed and adapted the recipe to suite our tastes and this is the version I have been making for a few years. 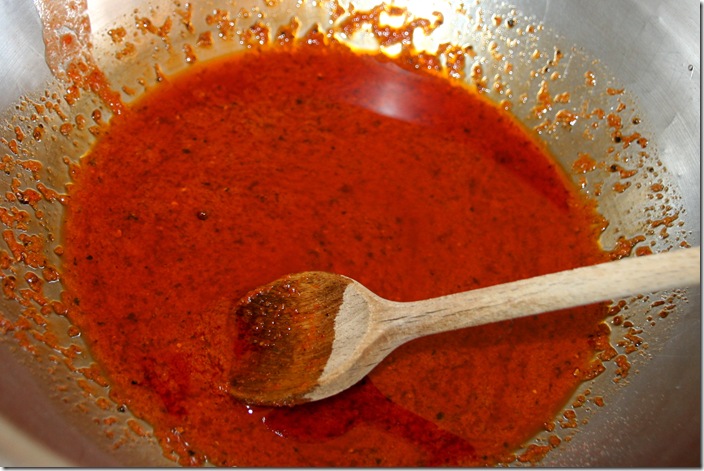 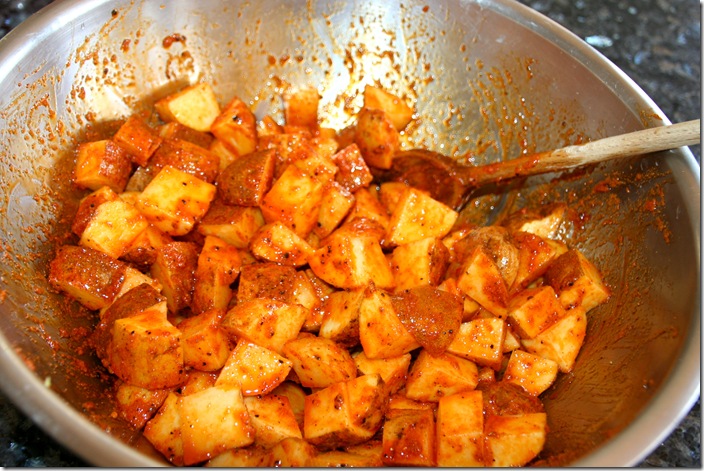 Add the potatoes and stir to coat. 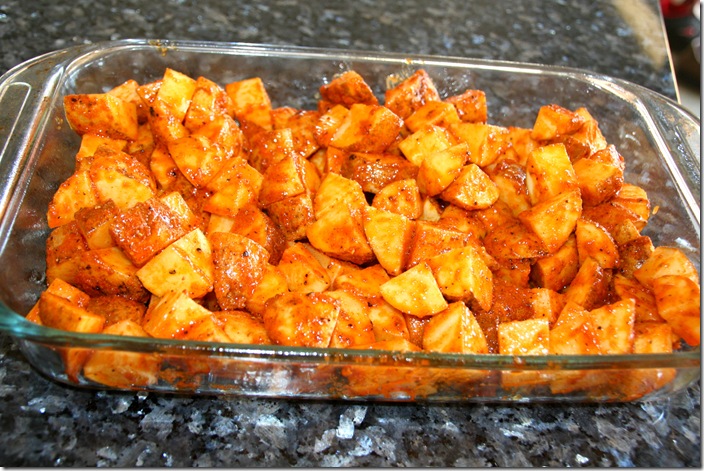 Add the potatoes to a greased baking dish. 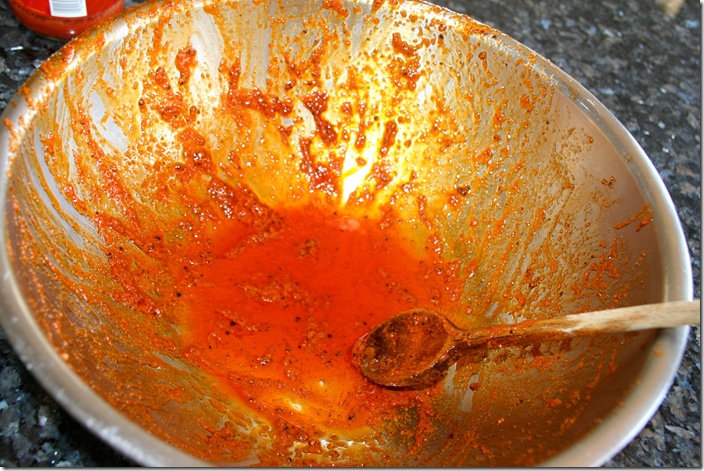 When scooping the potatoes into the baking dish, leave behind any extra olive oil/hot sauce mix. 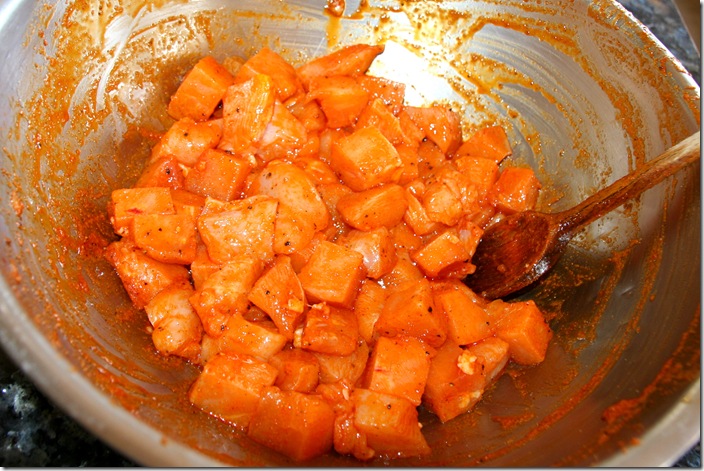 Add the diced chicken to the “left behind” olive oil/hot sauce mix and stir to coat all the chicken.  Allow to marinate as the potatoes bake. Roast the potatoes for 45-50 minutes, stirring every 10-15 minutes, until cooked through and nice and crispy on the outside. 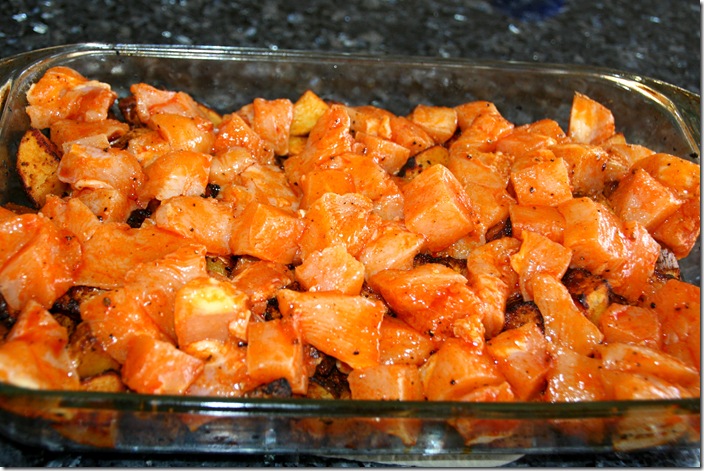 Once the potatoes are fully cooked add the marinated chicken. 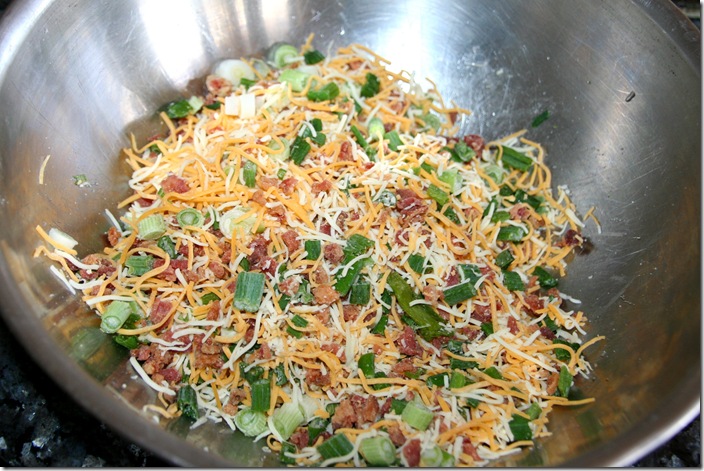 In a large bowl mix all the topping ingredients together. 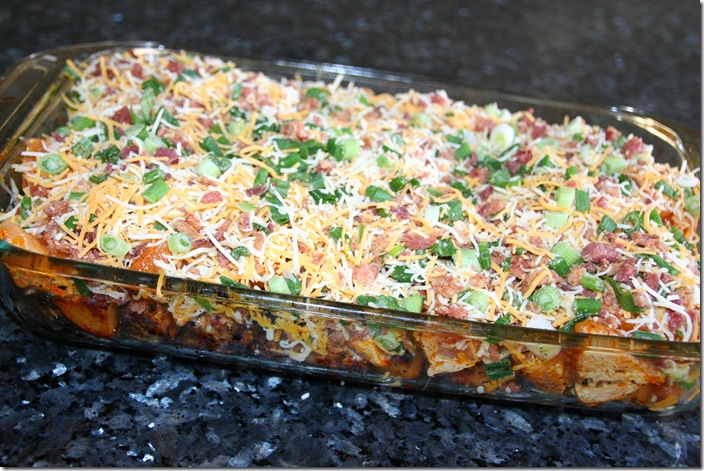 Top the raw chicken with the topping. 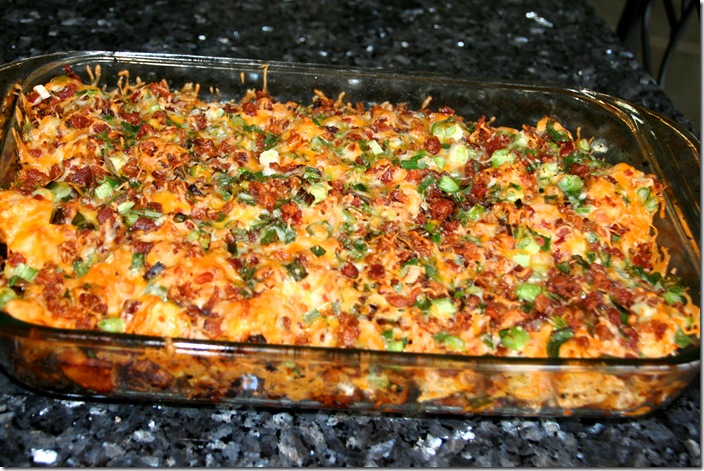 Bake until the chicken is cooked through and the topping is melted and bubbly delicious. 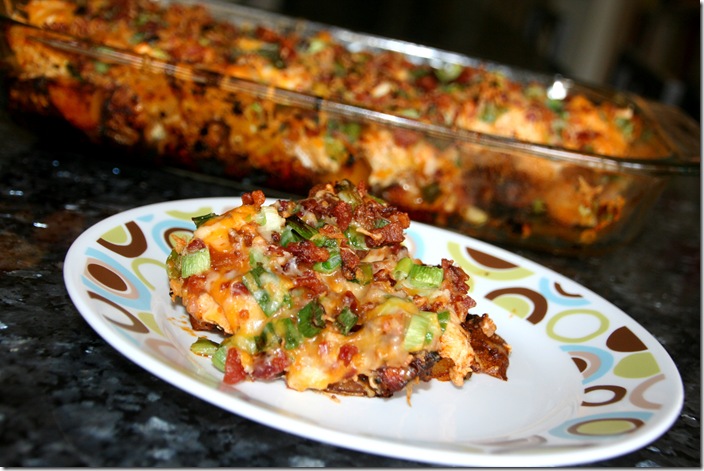 Preheat oven to 500F (This is NOT a typo, 500F is correct!)  In a large bowl mix together the olive oil, salt, pepper, paprika, garlic powder & hot sauce.  Add the cubed potatoes and stir to coat.  Carefully scoop the potatoes into a cooking spray coated 9 x 13 inch baking dish, leaving behind as much of the olive oil/hot sauce mix as possible.  Bake the potatoes for 45-50 minutes, stirring every 10-15 minutes, until cooked through and crispy & browned on the outside.  While the potatoes are cooking, add the cubed chicken to the bowl with the leftover olive oil/hot sauce mix and stir to coat.  Once the potatoes are fully cooked, remove from the oven and lower the oven temperature to 400F.  Top the cooked potatoes with the raw marinated chicken.  In a bowl mix together the cheese, bacon & green onion and top the raw chicken with the cheese mix.  Return the casserole to the oven and bake for 15 minutes or until the chicken is cooked through and the topping is bubbly delicious.  Serve with extra hot sauce and/or ranch dressing.