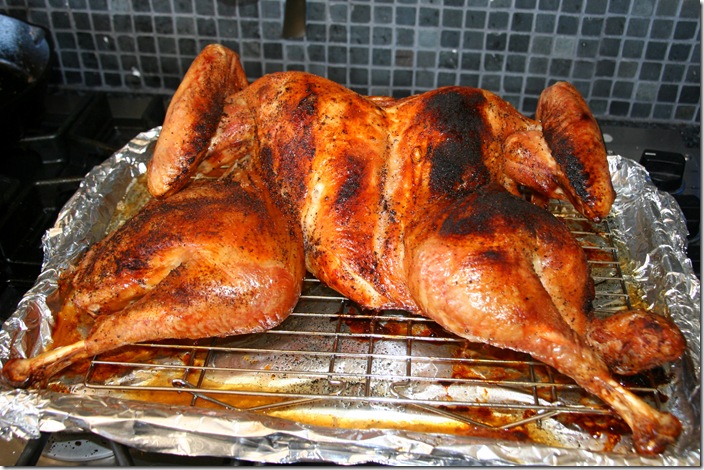 With everyone being sick this year at Thanksgiving, I just didn’t have it in me to make my usual Spiced Rubbed Turkey with Cognac Gravy and decided instead to make a simple Roasted Spatchcocked Turkey.  I’ve seen directions for making spatchcocked turkey all over the internet but I decided to just use one of my go-to easy and favorite poultry seasonings and not have to think about anything new.  Tuesday night before Thanksgiving, I split my turkey along the backbone and removed the bone and I also cracked the bird along the breast bone to make carving the bird later that much easier.  I prepared an aluminum foil lined baking sheet and added a rack on which the bird would sit. I rinsed and dried the turkey and spread it out, skin side down on the rack.  I seasoned the inside of the turkey then turned the turkey skin side up and seasoned the skin side.  I placed the turkey still skin side up, uncovered, into the refrigerator so that the skin could dry out a bit before cooking on Thursday.

Thursday, about an hour before I planned to put the turkey in the oven I removed the ready-to-go bird, already on it’s cooking pan from the fridge and let it warm up a bit on the counter.  The bird cooked perfectly in just shy of 1.5 hours and as you can see, all the skin was golden, crispy and delicious.  Making the bird this way doesn’t make for a beautiful whole bird presentation at the table but it sure makes carving the bird easy-peasy.  Because I had cracked the bird along the breast bone, once the turkey was cooked I easily used my poultry shears and just cut right up that center crease along the breast bone and moved the entire right half of the bird to my carving board.  I quickly cut off the wing and the thigh quarter and then separated the drum stick.  Next I removed the breast meat from the bone, giving me a gorgeous and moist boneless breast which was easily carved with a golden crisp piece of skin on each serving.  Because it was just the three of us and my parents, just half of the bird was all I needed for the serving platter.  All the turkey eaters heartily enjoyed the bird saying it was tender, juicy and delicious. 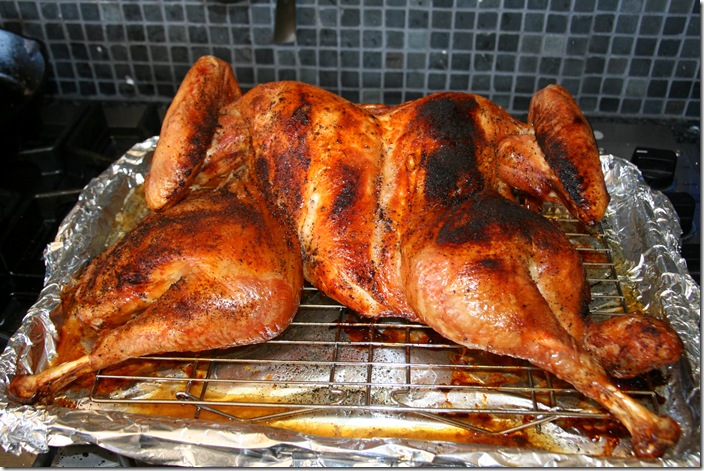 At least one day before cooking prepare the turkey.  Split the turkey along the backbone and removed it.  Save the removed backbone and use it either for making a stock for gravy or in soup.  Crack the bird along the breast bone to make carving the bird later that much easier.  Prepared an aluminum foil lined baking sheet and add a rack on which the bird will sit. Rinse and dry the turkey well and spread it out, skin side down on the rack.  I season the inside of the turkey with the sumac, garlic powder, salt & pepper and then turned the turkey skin side up and seasoned the skin side with the same.  Place the turkey still skin side up, uncovered, into the refrigerator so that the skin can dry out a bit before cooking.  When ready to cook, remove the bird from the refrigerator on it’s ready-to-go baking rack and pan about an hour before putting into the oven.  Preheat the oven to 450F and insert the probe of a programmable meat thermometer into the thickest part of the breast meat.  Roast the bird for 75-90 minutes or until a meat thermometer in the breast meat registers 160F.  Once the bird reaches temperature remove from the oven and allow the bird to sit for 10-15 minutes before carving.

To carve the bird use cooking shears and cut right up that center crease along the breast bone.  Moved half of the bird to a carving board and remove the wing and thigh quarter and then separate the drum stick.  Next removed the breast meat from the bone.  Carve the now boneless breast so that a golden crisp piece of skin is on each serving