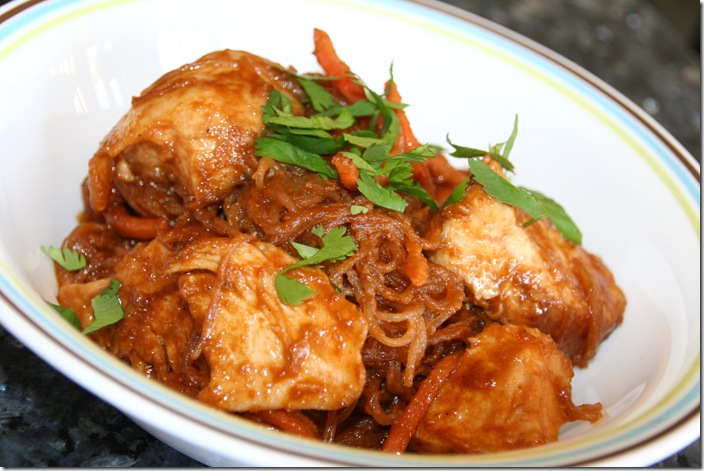 It’s Secret Recipe Club time again, so you know I’m excited, I love this time of month!  This month I was assigned Jessie’s blog Vanderbilt Wife.  I really loved reading her blog, seeing her adorable children and all her wonderful recipes, of which there are many so be sure to click on over and check them out.  I debated back and forth as to which recipe to make but in the end I decided on her Toddler Thai:  Noodles in Peanut Sauce with Chicken.  Jessie’s son is lactose intolerant and she makes this recipe for him and as my Maisie is allergic to wheat, egg & dairy, it was just a simple change of pasta to also make it gluten free and safe for my girl. 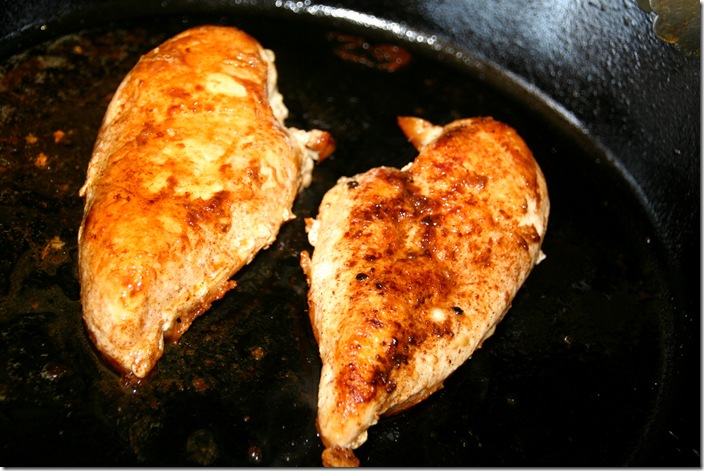 I sautéed up two chicken breasts as I had them defrosted and thought that I would use the second one in a chicken salad…but Maisie had other ideas.  Somehow between the time I started cooking this recipe and the time Maisie started eating it, she decided that she no longer liked the taste of peanut butter…but that of course could change tomorrow…and can we say finicky little girl???  She ate a little of the noodles and then asked for plain noodles with some of the chicken and ketchup…OY!!  I think she’s seven going on tween and definitely has become much more opinionated and picky.  Oh well, all was not lost with this recipe as I spiced it up a little with some Thai Garlic Chili Pepper Sauce and a bit of Sriracha and what was to be Maisie’s, became Eammon’s dinner.  Maisie’s loss was Eammon’s gain as he absolutely loved the pasta and all the flavors.  And little Miss Picky enjoyed her plain bean thread noodles, chicken and ketchup…oh well at least she ate and got some protein and calories into her…even if she did miss out on a delicious meal! 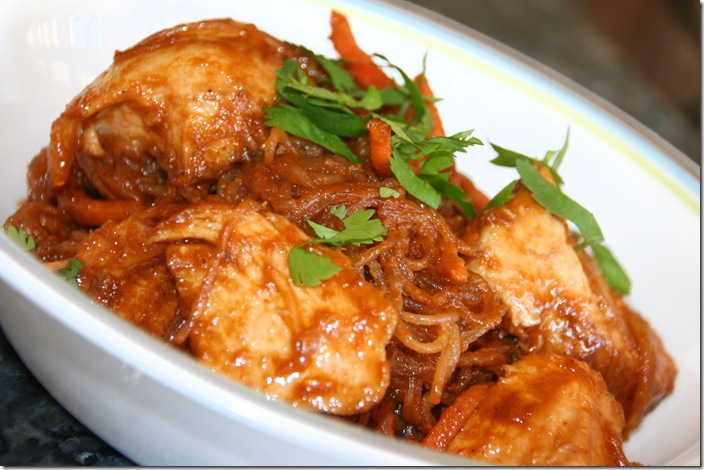 Prepare the noodles according to package directions.  Drain, rinse and set aside.

Season the chicken with the five spice powder and ginger.  Heat a large cast iron skillet and add a thin layer of half sesame oil and half peanut oil.  Once the oil is hot, add the chicken and sear on each side, then cover the pan and remove from the heat.  The residual heat in the cast iron pan will continue to cook the chicken and it won’t get over cooked and dried out.  Once the chicken is cooked through, remove it from the pan and slice thinly.  To the now empty pan, add the the peanut butter, soy sauce, honey, 1 TBS of sesame oil, Thai Garlic Chili Pepper Sauce, Sriracha and carrots and heat, stirring to blend well.  Once hot, stir in the noodles and the sliced chicken breast.  Garnish with cilantro and serve.