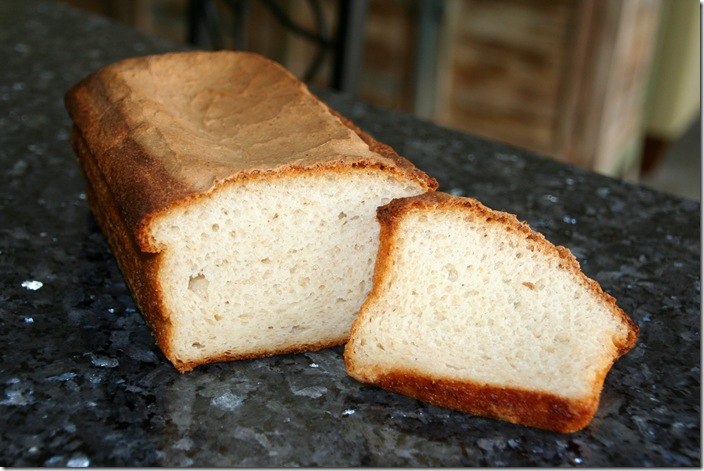 My A-Maisie-ing Maisie adores bread…well at least she used to until we found out that she’s allergic to wheat, egg & dairy and she had to give up her favorite, Nutella on bread…my poor girl!  I quickly found dark chocolate peanut butter which though not Nutella, was close enough to satisfy her.  In my attempt to give Maisie the bread she so dearly missed, we tried every.single.bread that I could find which was free of wheat, egg & dairy.  I swear though, there’s a racket going with gluten-free bread makers as each loaf seemed to run close to $10 and Maisie hated them all!  After spending a small fortune and having all my “bread” thrown in the rubbish bin we sort of gave up and Maisie resigned herself to not being able to eat bread and life went on.  But just recently I saw a recipe named Finally…Gluten Free Bread That Doesn’t Suck on One Good Thing by Jillie and honestly the name drew mw in and I just couldn’t pass it by without giving it a try.  After reading through the recipe I knew that I could adapt it for Maisie’s allergies as Jullie’s original recipe contained egg and milk powder. 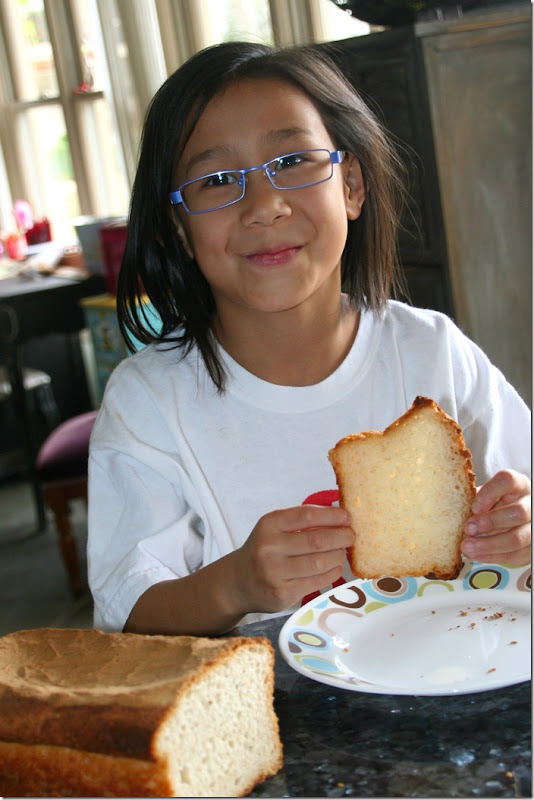 Maisie’s excited, just waiting to bite into her bread.  Honestly in this picture she knows what she’s getting because I have made six loaves of this bread already because Maisie absolutely LOVES it!!  This bread is crazy delicious and though I’ve tweaked the recipe each time I’ve made it, from the first batch it was wonderful.  The first time I made it, I gave a slice to Eammon and he thought that I made a loaf of regular yeasty bread and wanted more, but this bread was for Maisie so Eammon was just out-of-luck. 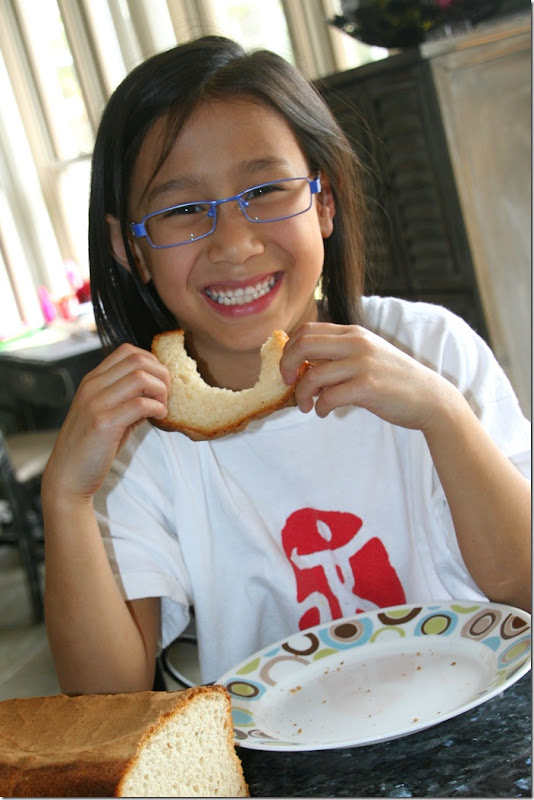 Maisie was so thrilled with the first two loaves that she finished them in three days!!  I swear, all she wanted to eat was bread with her Maisie “safe” butter.  It got to the point where I was using the bread as a treat, telling her that she could have some after she finished her meal and she opted for the bread in lieu of dessert!!  I’ve tried a taste of each of the three batches I’ve made and if I didn’t know, I wouldn’t know that this bread was gluten, egg and dairy free as it has that wonderful smell of yeast, the flour mixture doesn’t taste like you’re eating rice, the texture is tender and moist and there’s a nice chew to the bread.  I have to say, gluten-filled or gluten-free, this is some of the best sandwich bread I’ve ever eaten. 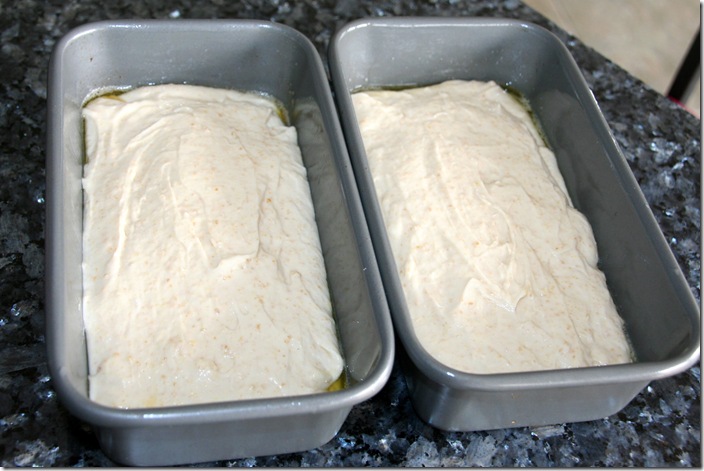 The dough in the pans before it rises.  I honestly wasn’t too hopeful for a real bread the first time that I made this but now I know that from this step, it won’t be long before my home will smell of fresh baked bread and Maisie will be begging for a slice or two. 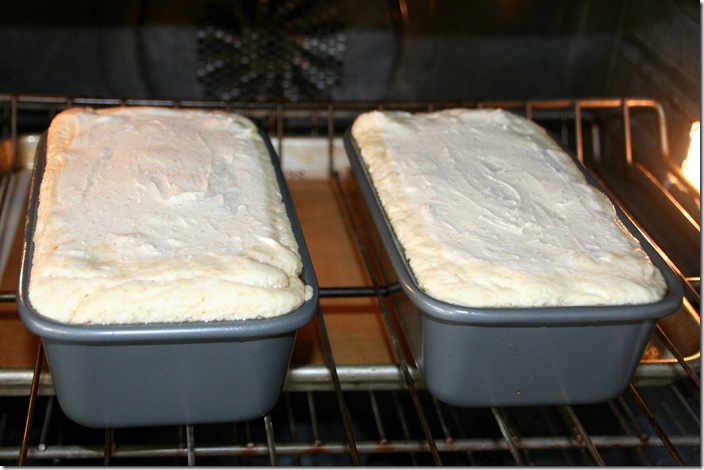 In the original recipe that Jillie posted, her bread rose about an inch above her pans but as I didn’t use eggs or milk, I found that a rise to just above the lip of the pan is about as far as I can take it before the dough will start to spill over the edge of the pan.  I keep a Silpat lined baking sheet on the rack below the bread pans so that if any dough does spill over, it doesn’t end up burning on the base of my oven. 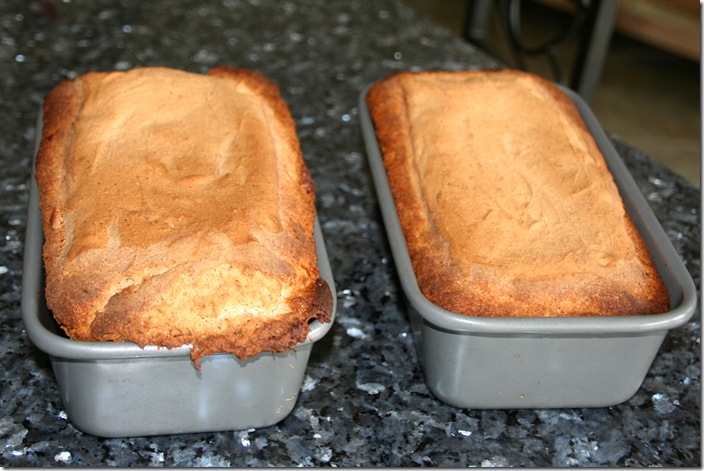 Even though my dough rose to just above the lip of the pan, once I started baking the bread I did have a little spill over.  I’m sure that if I had egg in the bread it would hold together a bit better, allowing for a higher rise. 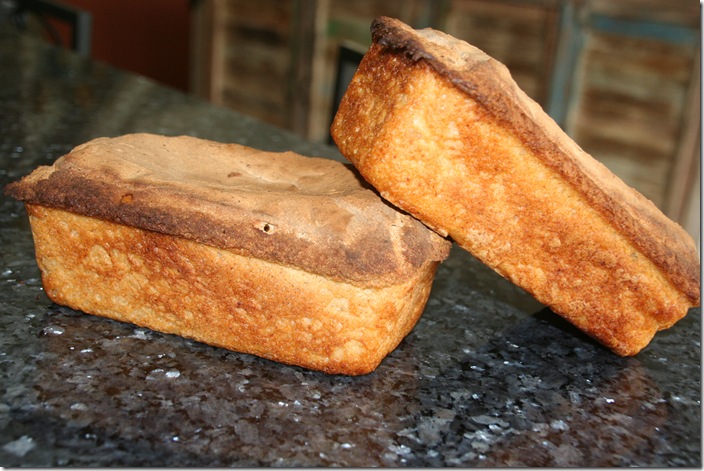 A little spill over or not, each time that I’ve made this, I’ve ended up with two gorgeous and delicious loaves of bread. 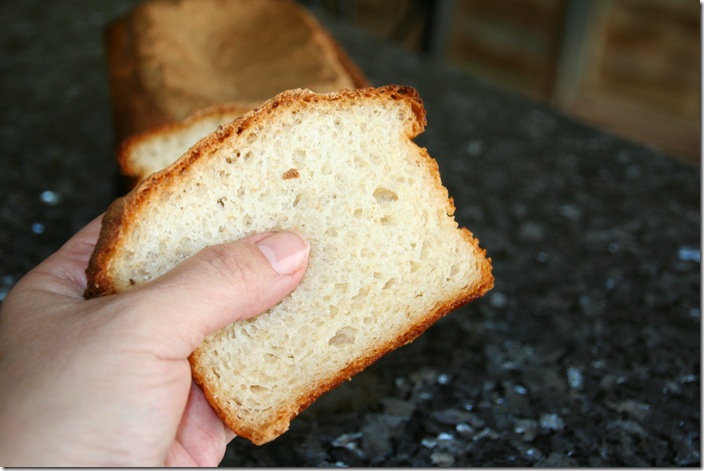 Let the bread cool completely before slicing.  Look at the gorgeous texture and when I press in gently with my thumb, it springs right back up (see next picture) so no dry as the dessert or super dense bread like most of the ones Maisie ended up trashing. 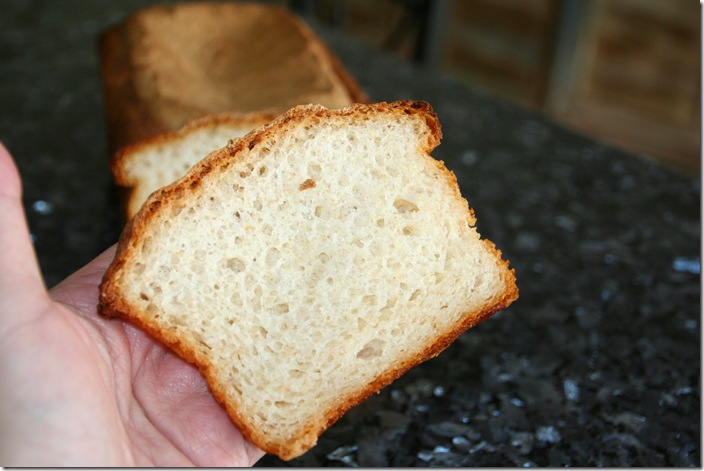 Spray into two 8-inch bread pans with cooking spray and set aside.

Add the yeast and sugar to the 5 TBS. of warm water and stir until mixed. Set aside to activate while you mix the rest of the ingredients.

In the bowl of a stand mixer fitted with the paddle attachment, add the margarine, apple cider vinegar, honey and 1/2 cup of the warm water.  Mix together for about 30 seconds.  The butter will be chunky, that’s okay.

With the mixer on low speed, slowly add the yeast mixture and the remaining 1 1/2 cups of warm water, then turn the mixer to medium-high speed and beat for 4 minutes.  Half way through stop the mixer and scrape down the sides of the bowl and make sure that nothing is stuck to the bowl.

After 4 minutes the bread dough should resemble a thick cake batter.

Spoon the dough into the greased bread pans. If desired, dip your fingers in water and smooth the top of the dough. Set aside in a warm place to rise for approximately about 60 - 90 minutes.  (I found that 90 minutes in my 100F proofing oven worked perfectly)  While the dough rises, preheat oven to 375F.

When the dough has risen to just above the top of the pans, place the pans in your preheated oven on the middle rack and bake for 45 to 55 minutes or until the top is golden brown and a skewer poked into the center of the bread comes out clean.  Remove the bread from the oven and let cool in pans for 10 minutes. Then remove the loaves from pans and place on a rack to cool.

After allowing the bread to cool COMPLETELY (this is important! Don’t rush it and cut into it while it’s still warm or you will flatten it.)  VERY carefully start cutting slices. Also very important, let your bread knife do the cutting for you! You provide the “sawing” action, but let the knife blade do the work. Don’t press down, just keep “sawing” across the top until you get all the way to the bottom of the loaf and hit the cutting board. The bread slices will keep their shape much better this way.  I have also found that slicing the bread top crust down makes for easier slicing.  Slice the entire loaf, put into a Ziploc bag and freeze.  When ready to serve, from frozen, toast or microwave the bread (40 seconds in my microwave) brings the bread back to that fresh baked texture.