Last month I participated in The Secret Recipe Club over on Amanda's blog and I had so much fun, I couldn’t wait to do it again.  How it works is, each month you are assigned a different participating food blogger and without telling them, you choose and make one of their recipes.  Then on a specified date and time everyone who is participating that month posts their recreation or version of the recipe they made.  Last month I loved reading though my assigned blog and I chose a Home Style Chicken Curry recipe which I made, dined on and posted about and well, I enjoyed every part of the process and I couldn’t wait for my next assignment.

I swear that my heart skipped a beat with excitement when I saw the email from Amanda with my next assignment and I quickly scrolled though all the important information included in her email looking for the words “Your assigned blog URL” and clicked on the link.  What I was led to was Heather’s It’s Yummy to my Tummy and I was all about reading her blog and checking out her recipes.  What I found was a Mom who’s a lot like me in that she loves to cook and bake and finds doing it a way to de-stress and make herself and everyone happy.  I also love that she cooks a lot with her daughter Alicia who’s only about seven months younger than my Maisie.  I found it adorable that in one post Alicia was wearing Little Einstein p.j’s, the same ones that my daughter Maisie fell in love with and still wears so how cute is that?  Heather’s blog was fun to read but now let’s get on to cooking.

Once again this month I was torn on which of the many delicious looking recipes I should make.  There was a recipe for Caramel Mix which I remember from my childhood as a friend’s Mom used to make it and I absolutely adored it but I was afraid that if I made it I’d eat the entire batch so I chose to opt for something else.  Then there was some delicious looking S’mores Fudge and I even had every ingredient needed to make this recipe already in the house.  But same problem, I’d eat way more than I should so better not to make it and have that sugar and chocolate temptation in the house.  If you can’t already tell that I’m craving but trying to avoid sugar, the other recipe that caught my eye was the Chocolate Eclair Dessert as I’ve seen this recipe a few times and I’ve just been itching to try it.  I need to have some company over so that I’ll have a reason to make all these wonderful sweet treats and not be tempted to eat them all myself.

I finally narrowed down my selection to two “less added sugar” recipes, Chicken BLT Salad with Avocado Dressing and Bacon & Sun-Dried Tomato Guacamole.  Both recipes were very similar in their ingredients and they both looked delicious and well… honestly I just couldn’t decided… so I made both this past month and while we loved, enjoyed and feasted on both I decided to post about the Guacamole for The Secret Recipe Club. 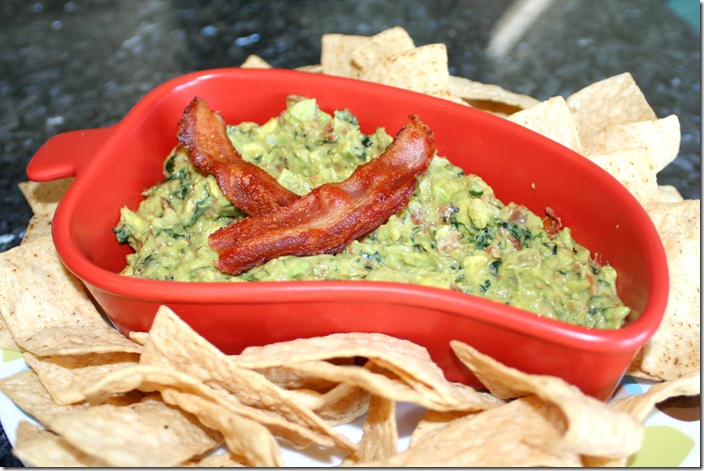 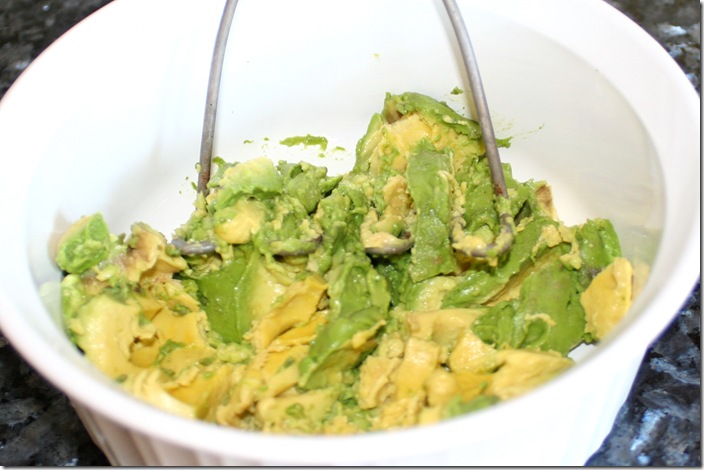 I followed Heather’s directions and even pulled out my old potato masher to break up the avocado in my Corning Ware French white casserole dish, just like she did. 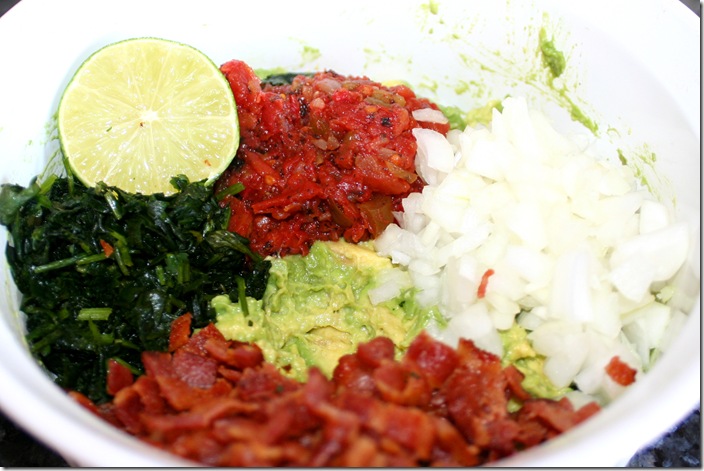 After I mashed the avocado I added all the ingredients, gave it stir, seasoned with salt and pepper and then had to resist the temptation to keep “tasting” it so that it had time to chill and to also allow the flavors to come together a bit.  I will tell you though, once that bowl of guac hit the table it didn’t stand a chance against Eammon and I and thankfully we weren’t sharing it with guests otherwise there may have been fights to get at the bowl.  Needless to say, we adored this recipe and this is now my go-to guac recipe.  Thanks Heather for sharing such a tasty dish.

5 slices hickory smoked bacon, crumbled
2 ripe Haas avocados
1/2 medium Vidalia onion, diced
1/2 can Fire Roasted Tex Mex Style Diced Tomatoes, drained
1/3 cup fresh cilantro, chopped (mine was “fresh” from the freezer as I had picked, washed, dried and frozen large quantities of cilantro that I pulled from our garden. When used in recipes like this or in soups it works and tastes great but it’s darker in color but because it’s been frozen it doesn’t work well as a garnish.)
Juice of 1 fresh lime
Salt & pepper to taste

Prepare bacon by cooking to desired crispiness. Drain the bacon on paper towels and when when cool, crumble.  Cut open and prepare avocados by scooping out the flesh and place in a bowl. Use a potato masher or forks to break up the avocados.  Add the onion, the drained Fire Roasted Tex Mex Style Diced Tomatoes, cilantro and the lime juice.  Fold to mix everything together well.  Season with salt & pepper. Cover guacamole with plastic wrap pressed directly against the guacamole so that it does not turn brown as fast. Chill well before serving.  Garnish with bacon and/or extra cilantro when ready to serve. 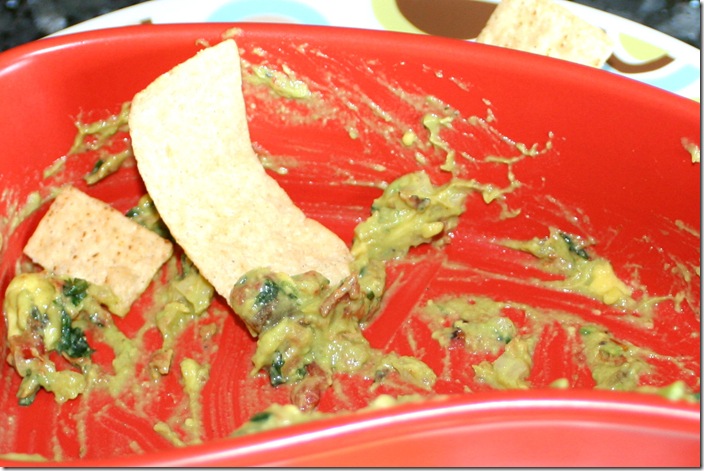 I have a complaint with this recipe in that there was one major, huge flaw and that was, it didn’t make enough.  It was so delicious that Eammon and I polished off the entire bowl in short order so if you make this recipe, double, triple or quadruple the ingredients and don’t put it out at a party and turn your back thinking that you’ll get some later because you won’t as it’ll be gone in a flash.