A little ways back I received a comment from Amanda at The Sweet Details that my Stir-Fried Asparagus with Water Chestnuts, Ginger & Cashews was featured on Savory Sunday so I popped over to check it out.  While there I found another featured recipe which looked quite interesting, Savory Bacon & Egg Cups and I knew that Eammon would love them and with an easy little change, so would Maisie.  Thus I ended up with Baked Egg Cups two ways. 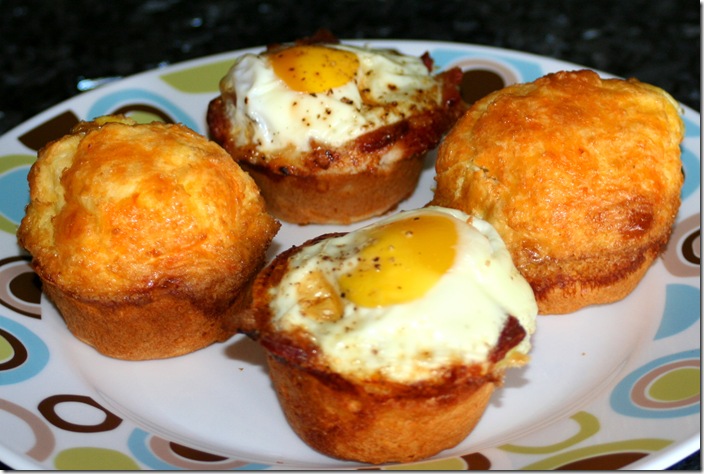 Both versions of the Baked Egg Cups were simple and fast to make and because there’s honestly nothing complicated and there are just a few ingredients, even someone who claims that they can’t even boil water could totally impress making these recipes.  I served these Baked Egg Cups for dinner one night when I needed to make something quick after spending a long afternoon at the pool.  Both versions were loved so I’ll be keeping this recipe as it’s a wonderful dish for breakfast, brunch, dinner or even a late night breakfast meal. 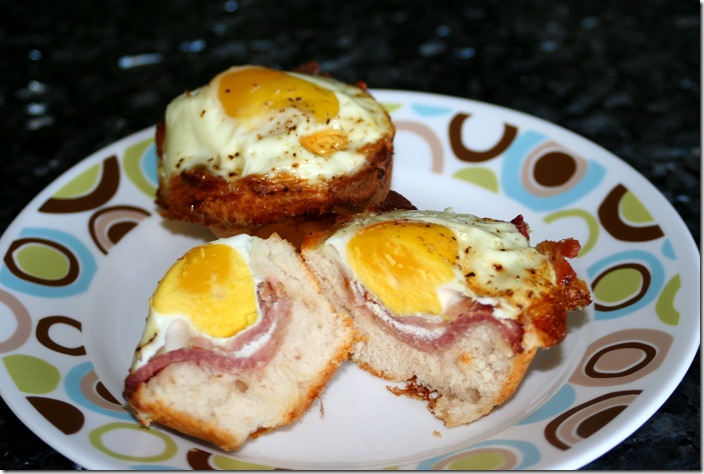 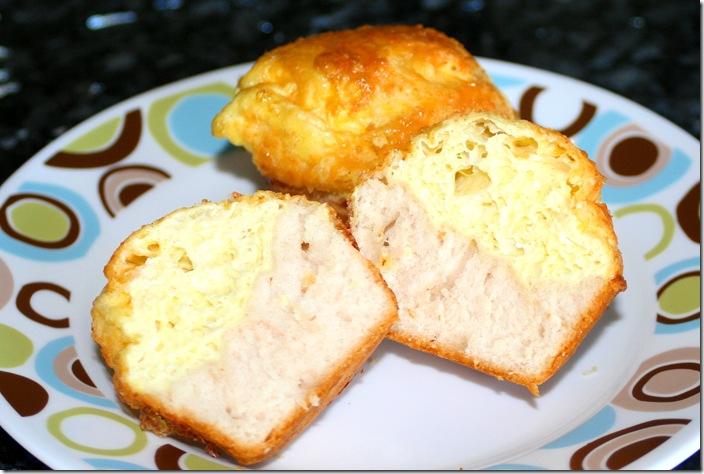 Maisie’s not a real bacon lover nor does she like seeing the white and yolk of an egg in an unblended form so Maisie enjoyed Baked Scrambled Egg & Cheese Cups. She enjoyed it sliced open with a little bit of butter spread on the biscuit.

1 can refrigerated buttermilk biscuits
1 egg for each biscuit you’re going to make
1 slice of pre-cooked bacon for each biscuit
Shredded cheese, I used Fiesta blend cheese because that’s what I had on hand.
Salt and pepper to taste

Pre-heat oven to 350F.  Spray a muffin tin with cooking spray and then lay one biscuit into each cup.  Press the biscuit dough so that it comes up the sides of the cups.

Then add one of the fillings:

For the Baked Egg Cups with Bacon:  Cut the bacon slice in half and using one slice per cup, criss cross the half slices pressing into the biscuit dough.  Crack one egg on top of the bacon and add salt & pepper to taste.

For the Baked Scrambled Egg & Cheese Cups:  Scramble one egg and pour over the biscuit dough and then sprinkle with cheese.

Bake the egg cups for 25-30 minutes until the whites are set.  Run a small knife around the edge of each cup to loosen.  Serve immediately.

We did have leftovers which I stored just in a Ziploc bag in the refrigerator over night and the next morning I reheated everything in the microwave and the egg cups held up beautifully.  They really were as good as they had been the night before so great to make ahead!