There are dozens of different varieties of laksa and I’ve enjoyed many of them but recently I just had a flavor profile in my mind and no recipe so I got creative and the outcome, totally delicious!  Don’t let the long list of ingredients scare you off, this is really simple to make and what’s nice is that when you serve it, everyone can pick out their favorite toppings to add to the bowl. It would be fun to serve at a party, instead of a taco bar or chili bar, it could be a laksa bar.   We really enjoyed the contrast between the spicy hot laksa and the crisp cold veggies. 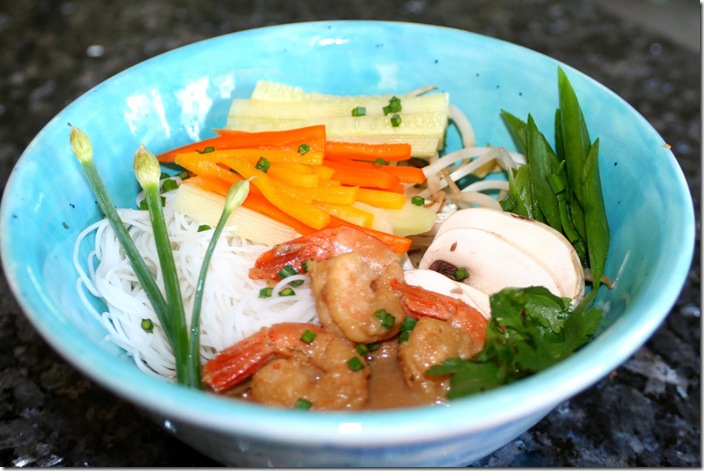 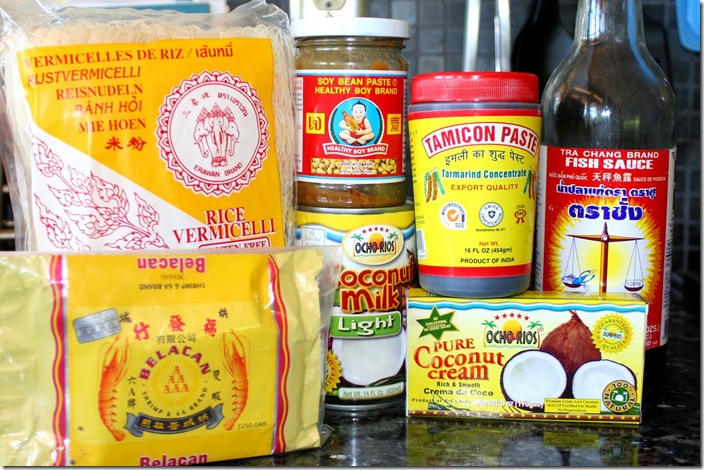 (Some of the less common ingredients so if you go shopping you’ll know what to look for.)

Crumble the shrimp paste onto a foil lined pan and roast in the oven @ 350F for 8-10 minutes until it is dry and crumbly.  Add the roasted shrimp paste, shallots, red peppers, Thai chili peppers and garlic to a food processor and process to a fine paste then set aside.

In a large pot melt the coconut cream being careful not to allow it to burn but do allow it to toast ever so slightly.  Once the coconut cream is melted and you can smell toasted coconut add the mixture from the food processor and stirring constantly cook for two minutes.  Add the coconut milk, chicken stock and scotch bonnet pepper and simmer on low, stirring often for 30 minutes.

Meanwhile in a food processor add the soybean sauce, tamarind paste and fish sauce and process until smooth.  After the coconut mixture has simmered for 30 minutes add the soybean, tamarind mixture and stir to combine.  Simmer for five minutes and taste.  The soup should be gravy consistency thick, a little “gritty” in texture from the ground up vegetables and shrimp paste, spicy hot, a little sour, a bit sweet and slightly salty.  Add the shrimp to the simmering soup, stir, cover and immediately turn off the heat allowing the shrimp to poach.  After ten minutes remove the pot lid and check to see that the shrimp are cooked through.  Remove and discard the scotch bonnet pepper.  Add the chopped cilantro and stir to mix.

To make the noodles bring a large pot of water to a boil.  Add the noodles, cover and remove from the heat.  After 3-4 minutes stir the noodles to separate them then drain and rinse and set aside covered.

To serve, put some noodles into a large bowl and ladle in some of the soup.  Top with your favorite nice chilled fresh veggies.