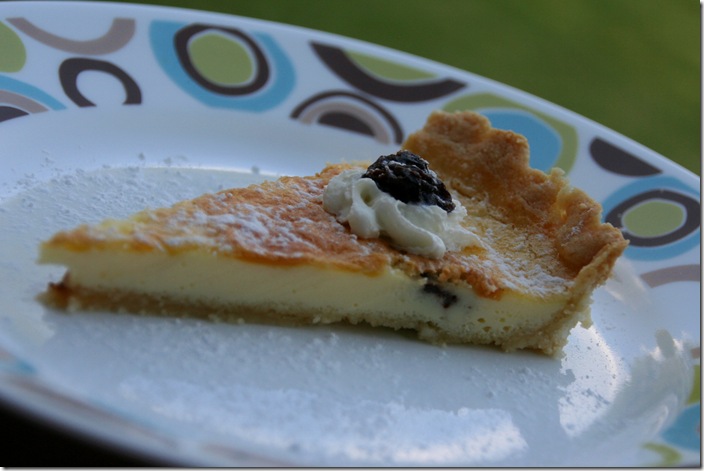 Can you believe it, we are now at month nine of the Improv Cooking Challenge and I haven’t missed a month yet.  The challenge is hosted by Kristen of Frugal Antics of a Harried Homemaker.  As always I looked forward to participating and finding or coming up with a great recipe which included the two theme ingredients.  This month the participating bloggers were asked to make any recipe of their choosing using the two given ingredients of cherries & almonds.  After all of our recent travels (If anyone is interested, cruise posts are here, here & here.  Travel posts: Ponta Delgada (Azores), Amsterdam, Malmö, Sweden, Copenhagen day 1, day 2 & day 3 and lastly London.) I have been very careful with the amount of sugar, carbs, chemicals & preservatives in our food so this month I wanted to make something delicious which didn’t do the diet in…yet I wanted something on the sweet side so this tart was born. 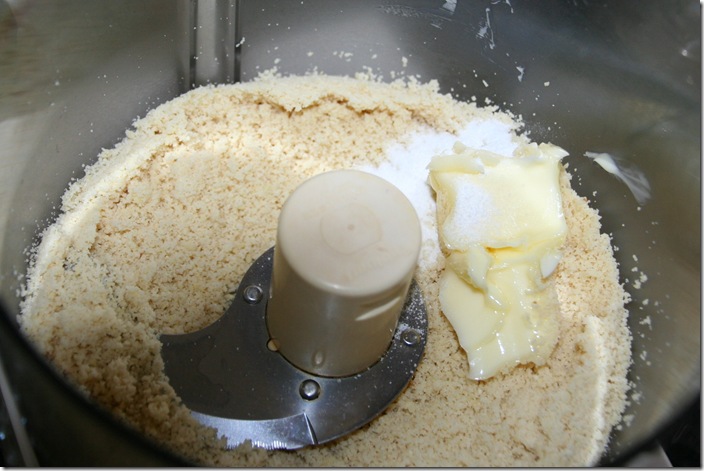 I decided to use an almond crust which I’ve used numerous times before when making cheese cakes, pies and other tarts and it’s a favorite of mine and oh-so-simple to make. 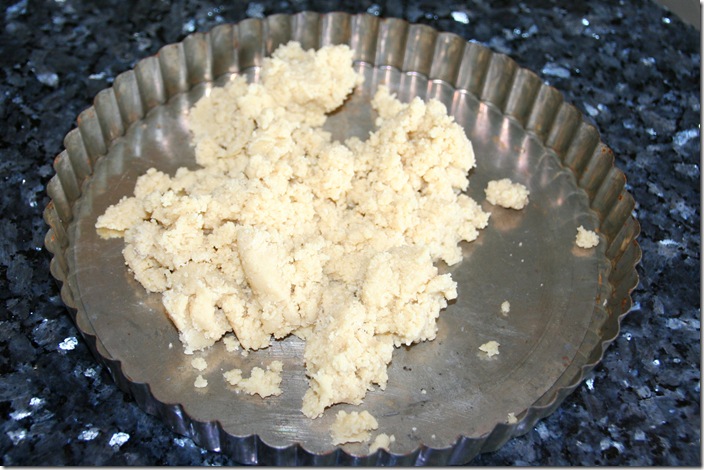 The crust easily comes together in the food processor and then I just dump it out into the pan I’m using which has been coated with cooking spray. 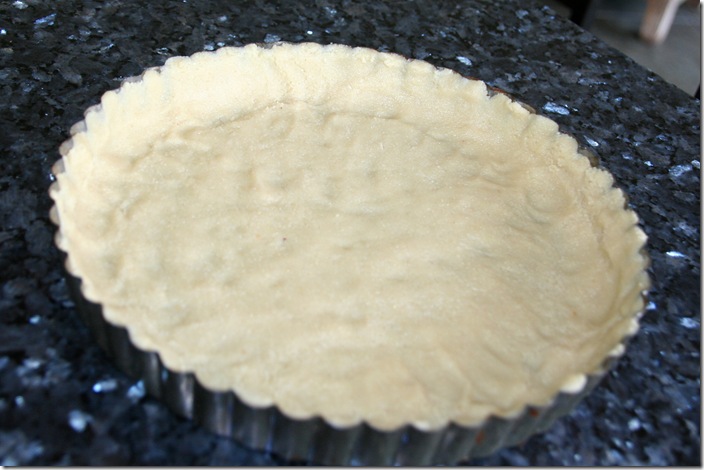 Then there’s no rolling involved, just press it evenly into the tart pan. 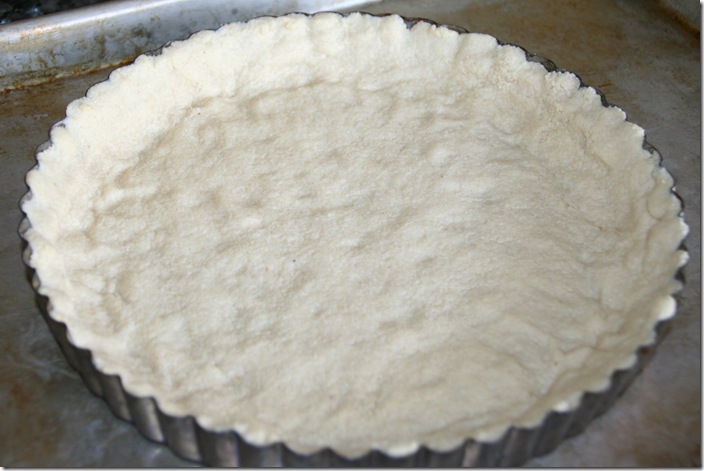 Place the tart pan on a baking sheet.  In this case, because I would be cooking the tart further with the filling, I only cooked the crust for five minutes but if you’re cooking the crust to then add a filling that won’t require further baking, the cooking time increases to about ten minutes or until it is lightly browned. 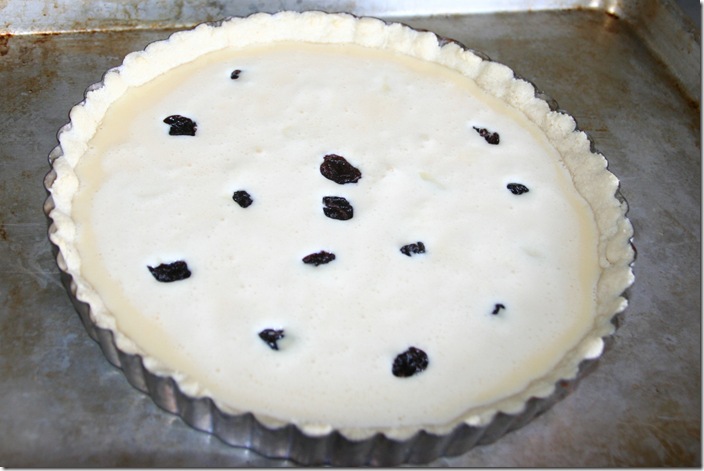 Without even washing it, I made the filling in the same bowl of the food processor in which I made the crust, so this is a one “bowl” recipe.  I poured the filling over the partially baked crust, added my cherries and it was back into the oven for this tart. 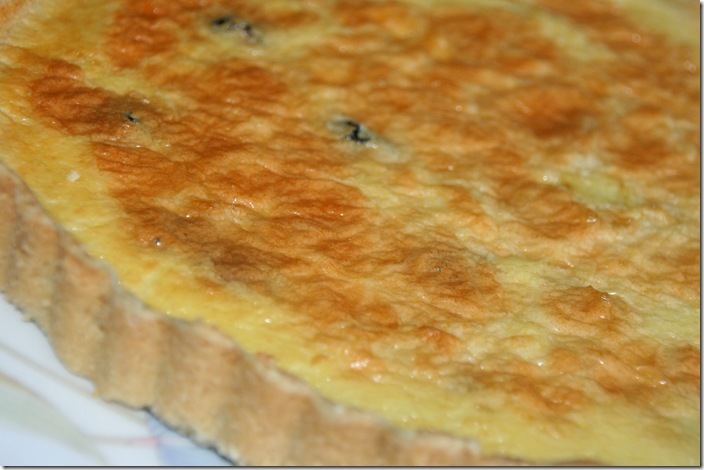 Golden and delicious.  The crust is tender and the filling is custard like and creamy.  The entire tart had a wonderful almond flavor and the cherries were sweet little surprises hidden throughout.  Overall the tart isn’t especially sweet but with a little dot of whipped cream and with the sweetness of the dried cherries, it’s a perfect dessert. 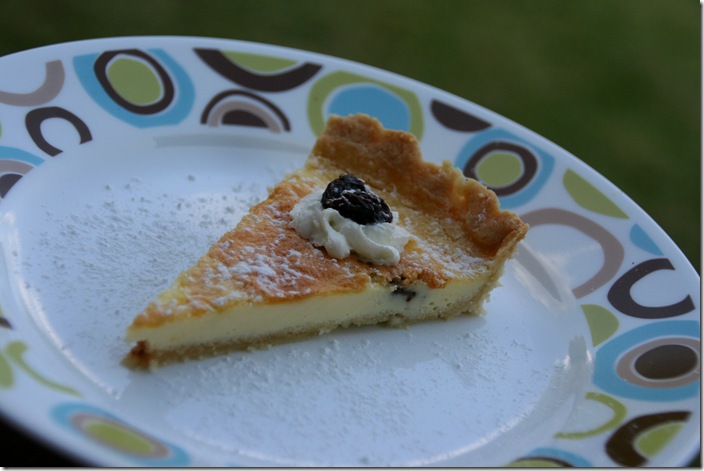 Preheat the oven to 350F.  To make the crust, add the almonds to the bowl of a food processor and using the pulse button, process until the almonds are finely ground.  Add the butter and 3 packets of Stevia and process until it all comes together and starts to form a ball.  Put the almond mixture into a 9-inch tart pan which has been sprayed with cooking spray and press the mixture to cover the bottom and up the sides of the pan.  Place the tart pan on a baking sheet and bake for 5 minutes.  The crust will still be very pale but that is okay.

While the crust is baking, no need to clean out the food processor bowl, just add the whipping cream, eggs, almond extract and 4 packets of stevia and process until fully blended and smooth.

Once the crust comes out of the oven, lower the temperature to 325F.  Pour the egg mixture into the hot crust and place the cherries evenly spread out in the mixture.  They will sink but don’t worry about that.

Bake for 20-22 minutes until the top is lightly browned and set.  Check the tart as it bakes and if it starts to get too brown just gently place a sheet of foil over the top.

Once baked, remove from the oven and allow the tart to cool completely before slicing.  Tart can be served at room temperature or chilled.  Decorate with a dusting of Whey Low powdered, some whipped cream and an extra cherry.