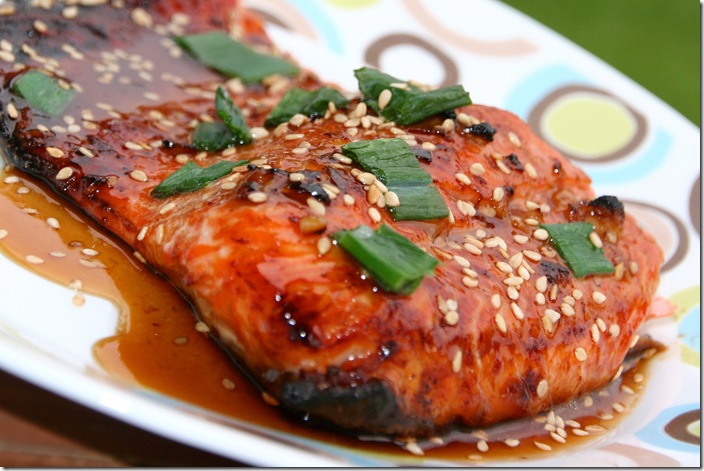 I don’t remember how I happened upon Jessica’s blog How Sweet It Is but once there I was immediately drawn to her recipes, especially her Toasted Sesame Ginger Salmon as her pictures had me wanting to lick my computer screen.  So as I do, I saved her recipe to my ever expanding “need to make file.”  Then I was emailing with my bloggy pal Colleen and she mentioned that this week she was making my Coriander Roasted Salmon with Cilantro Yogurt Sauce and that got me in the mood for some salmon.  Though my Coriander Roasted Salmon with Cilantro Yogurt Sauce is one of my favorites I remembered that I had Jessica’s recipe saved and other than the salmon, I thought that I had everything in the house* so that’s the direction I went.

I of course changed Jessica’s recipe a bit by upping some of the flavors and to better fit with my diet I reduced the oil and made sugar free substitutions for the honey and brown sugar.  I also used salmon with skin and made sure to crisp it up as Eammon loves salmon skin.  So how did it turn out?  Well oh my word this salmon was a huge hit, moist, flavorful and wonderfully delicious.  Maisie loved the sweetness of the glaze and ate a huge portion, as large as mine.  Eammon and I loved it too and were both picking at the scraps on the baking sheet, enjoying every last bit.  I made two large filets so I had one left over and the following day we enjoyed the leftovers, Maisie and Eammon ate it heated and I loved it cold, flaked on a salad with a bit of the glaze used as dressing.  The day after we finished both filets I asked Maisie what she wanted for dinner and she asked for more salmon!!  I will be making this salmon again and again and very soon as it was totally delicious and a winning recipe in all our books.

*  I thought that I had all the ingredients in the house, including fresh green onions but that wasn’t to be so I had to pull some from the freezer so they look a bit limp on the salmon.  Oh well, still delicious. 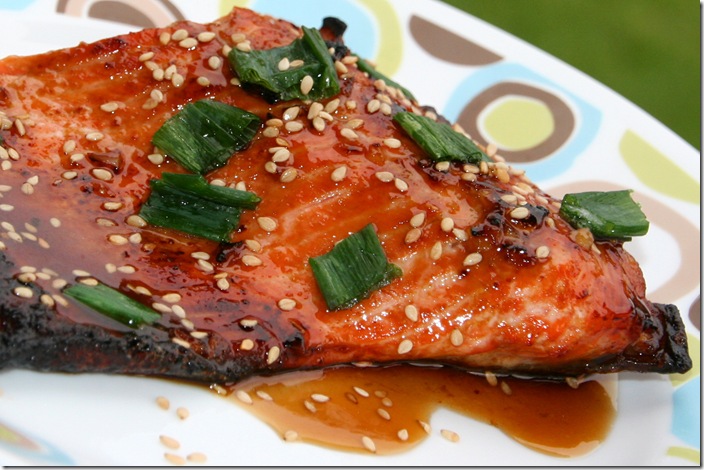 Line a baking sheet with aluminum foil and spray with cooking spray.

In a large bowl or baking dish, combine the sesame oil, vinegar, Whey Low Gold, soy sauce, garlic, ginger & ground pepper and whisk well until combined. Add salmon to the dish or place everything in a Ziplock bag, then refrigerate and marinate for 30 minutes.

Preheat the broiler in your oven to high and move the rack as close to the broiler coils as possible.

Remove salmon from the marinade and place skin side up on the prepared pan and then place directly under the broiler. Cook for 5 minutes until the skin is crispy.  Remove from broiler and turn the filets over.  Top with some of the marinade, getting as much of the minced garlic and ginger on to the salmon as possible.  Return the salmon to the broiler for approximately 5 more minutes until the inside of the salmon is opaque and easily flakes with a fork.

Serve immediately topped with some toasted sesame seeds, green onions and some of the Sesame Ginger Honey Glaze  (below)

Combine all the glaze ingredients in a bowl and whisk until smooth. Pour over salmon.