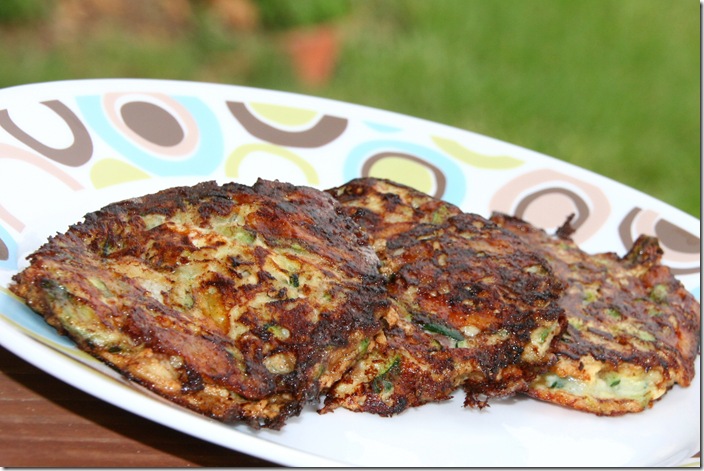 Yesterday I pulled a giant zucchini from the garden which was the length and girth of Eammon’s forearm.  I’ve been in the mood for Zucchini Fritters and I’ve made them in the past but I wanted to do something a bit different so decided to change up my recipe a bit by adding bacon and cheese and I also omitted the flour as I’m trying to avoid carbs.  These fritters were tender and full of wonderful flavor.  The funny thing about them though, everyone thought that they were eating potato pancakes as they really tasted almost like stuffed potato skins.  I wish that I had had some sour cream to top the fritters as I think that would have been the perfect finishing touch.  I’d bet if you wanted to fool some veggie hating adult or child into thinking that they’re eating potato, just take off the green skin of the zucchini and they’ll never know that they’re eating a healthy vegetable.  These were delicious hot last night but I enjoyed them even more as leftovers for breakfast this morning. 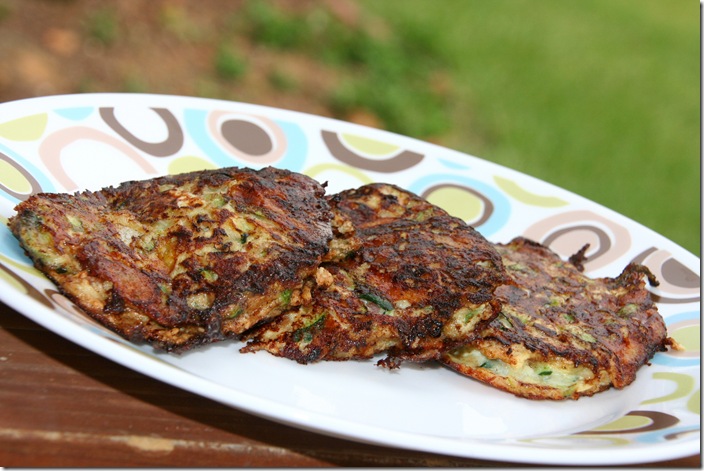 Add the grated zucchini and grated onion to a cheesecloth lined sieve and squeeze & press out as much of the water as possible. In a large bowl add the squeezed out zucchini & onion, eggs, grated cheese, bacon bits, salt & pepper.  Stir to combine well.

Heat a large cast iron skillet over medium high heat and add just enough oil to coat the bottom of the pan.  Using a large cookie scoop portion out the zucchini mixture into the hot pan, being careful not to over crowd the pan.  Press and spread the zucchini mixture just a little.  Cook until the bottom side is golden and then carefully flip to cook the other side.  Once both sides are golden remove to a paper towel lined cooling rack.  Serve hot or as I prefer, chilled for breakfast the following morning.