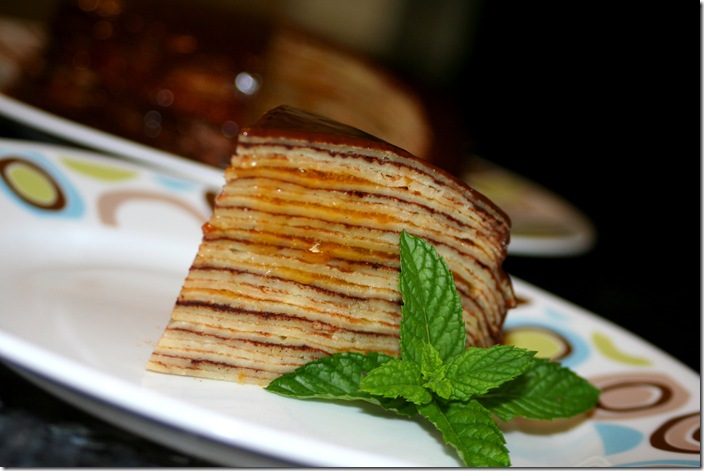 Do you ever see a recipe or a gorgeous food picture and though you would love to try it you just click away thinking, "Seriously, I'm never going to actually make that."   Well that's exactly what happened with this recipe on Katherine Martinelli’s blog. Katherine had guest blogger Jayne Georgette from Chocolates & Figs share her 23-Layer Crêpe Cake and the cake looked gorgeous and the back story about the cake was interesting but the recipe at first glance seemed long and involved and because it was a dessert, which we really don’t eat that often, I clicked away.  Had it been what I call a “practical” recipe, something that I could make and put on the table for dinner I probably wouldn’t have been so quick to dismiss it.  The picture haunted me though and I kept thinking about the cake.  So I went back, actually read instead of just scanning the recipe and realized that though the cake looked oh-so-fancy it was really nothing more than I've done many times in the past and even if it was something new I wouldn’t have had a problem as Jayne’s directions and pictures took me step-by-step though the entire recipe.  I make crêpes all.the.time…shoot I even have a pan, so I left a comment saying that the cake looked wonderful and that *maybe* I would attempt to make it. 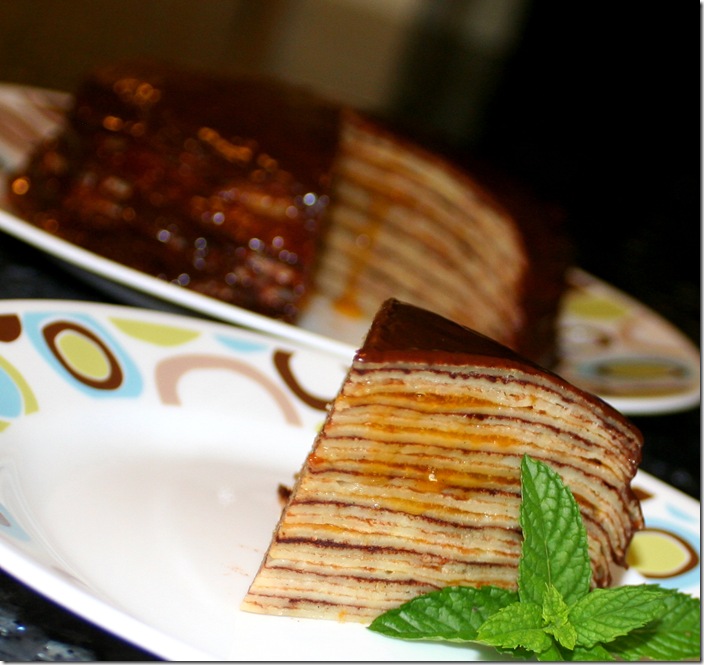 After actually reading the recipe I knew that there were a few changes that I wanted to make but for the most part I stayed true to the original recipe.  I used all three fillings as suggested, the almond, chocolate and the apricot but the original recipe had a bittersweet chocolate ganache which I changed.  I don’t particularly care for ganache and Eammon doesn’t enjoy bittersweet or dark chocolate so I instead made a milk chocolate glaze which worked wonderfully as it wasn’t too thick or overbearing and it set just enough to give the cake a shiny and polished finished look. 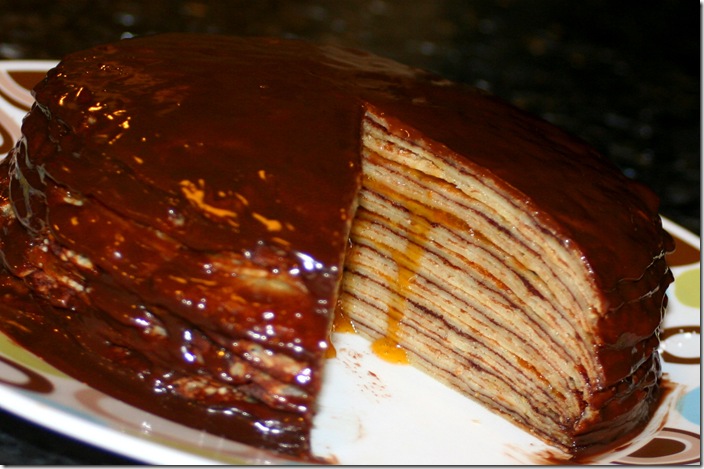 The flavors of the cake were wonderful, not very sweet but a beautiful mix of the almond, apricot and chocolate fillings with the vanilla bean and citrus coming through from the crêpe.  After making this cake once, I would definitely make it again as it really was simple to make all the components and layering and finishing took no time at all.  A very impressive, fancy looking and delicious cake, perfect for any occasion.

Oh and why 24 layers?  Because that’s how many crêpes I ended up with (after Maisie and I taste-tested a couple topped with butter, lemon juice & powdered sugar) so I went with what I had. 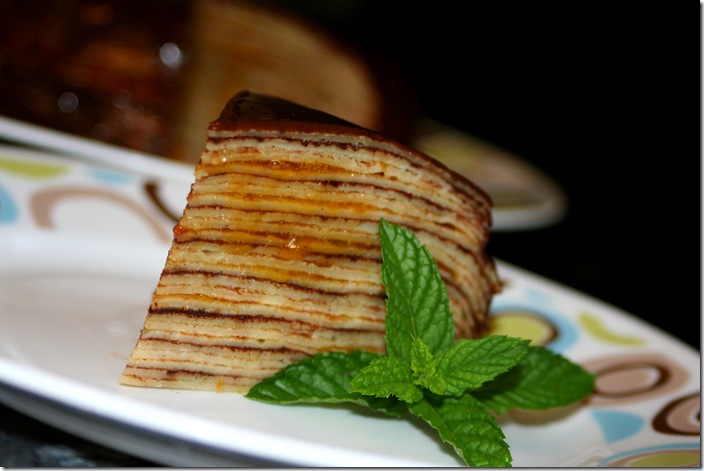 For the Crêpes:
Place all the ingredients in a food processor or a blender and process until thoroughly blended. You can do it by hand using a whisk, or even a fork. Strain the batter.

Transfer the strained batter into a pitcher and cover with a plastic wrap placed directly on the surface of the better.  Let rest in the refrigerator for at least 1 hour.

Heat a 7-inch skillet over medium heat and lightly brush it with butter.  After the pan is hot, take the skillet off the heat and pour a scant 1/4 cup of the batter into the skillet.  Immediately start tilting and rotating the pan in order to coat the entire bottom. (If the batter sets before the entire skillet is coated, reduce the heat slightly for the next crêpe.

Return the skillet to the burner and cook the crêpe until just set, when little bubbles appear on the surface and it appears golden around the edges, about 30 seconds. With an offset spatula loosen the edge of crêpe and then flip it over carefully. Cook until the underside is set, about 15 seconds. 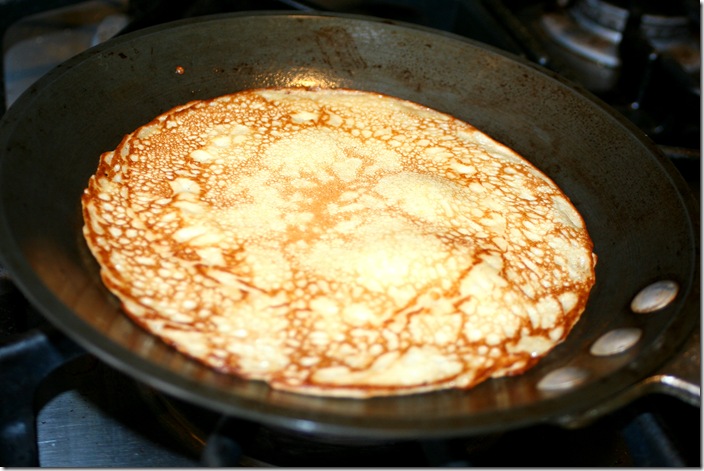 Transfer the crêpe to a plate. Brush the skillet with more butter and make another crêpe in the same manner and continue until you finish the batter. 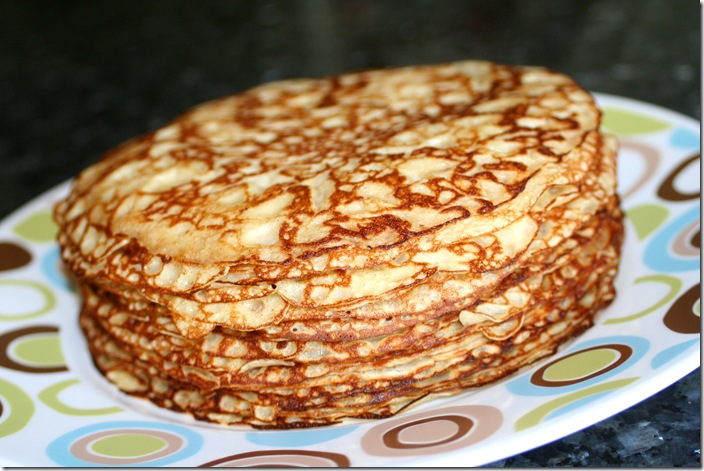 I layered the cooled crêpes one on top of another, covered with plastic wrap and refrigerated overnight.  I allowed them to “warm up” for 30 minutes the next day before I started assembling the cake and the crêpes separate easily.  The original recipe states that you could also separate crêpes with sheets of parchment, wax paper, or foil. (Crêpes can be made ahead and kept in the refrigerator in a sealed container, separated by sheets of parchment, wax paper, or foil for up to 3 days in the refrigerator or at least 1 month in the freezer.) 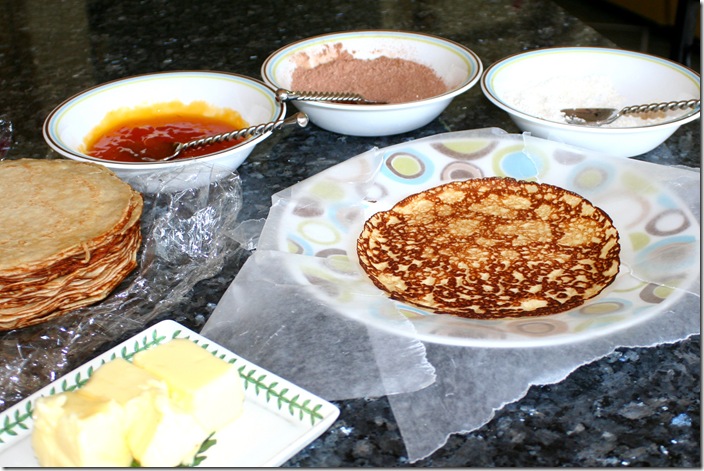 Gather together the three fillings:

Preheat the oven to 325F. (I layered my cake on a plate but next time I will do it directly on a baking sheet.)  Place the crêpes one by one on the baking sheet, alternating the fillings on top of each crêpe.  Brush a bit of butter on those crêpes that are topped with either the cocoa powder or the ground nuts (not on the ones brushed with a jam) to assure that the cake will not be dry. 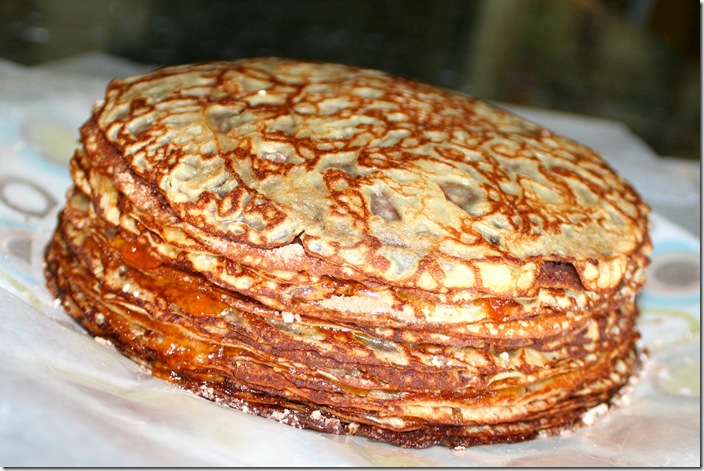 For the Glaze:
3 1/2 oz. milk chocolate (I used a Godiva bar because it’s what I had in the house)
1/4 cup heavy cream
1 teaspoon light corn syrup

In a microwave safe measuring cup heat the cream.  Add the chocolate and corn syrup and stir to mix until smooth. 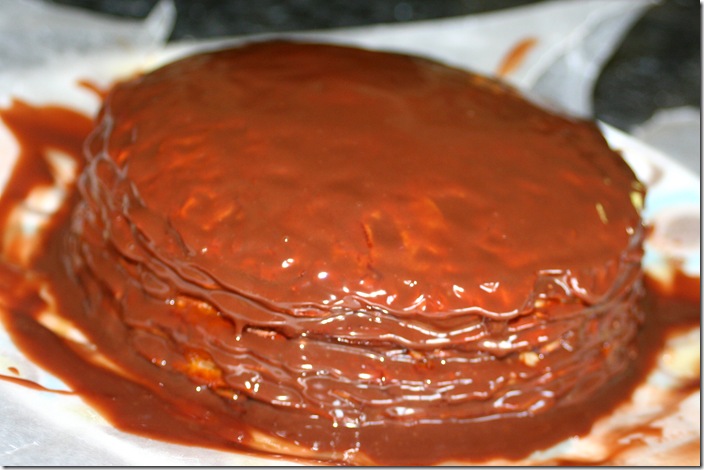 Allow the cake to cool for about 10 minutes and then transfer the cake to your serving plate on which you have placed strips of parchment paper around the edge (so that the parchment can be removed later so to leave a clean plate and edge.)  Pour the warm glaze over the warm cake keeping the top smooth and trying to coat the sides of the cake.   Place the cake in the refrigerator to allow the glaze to set and harden. 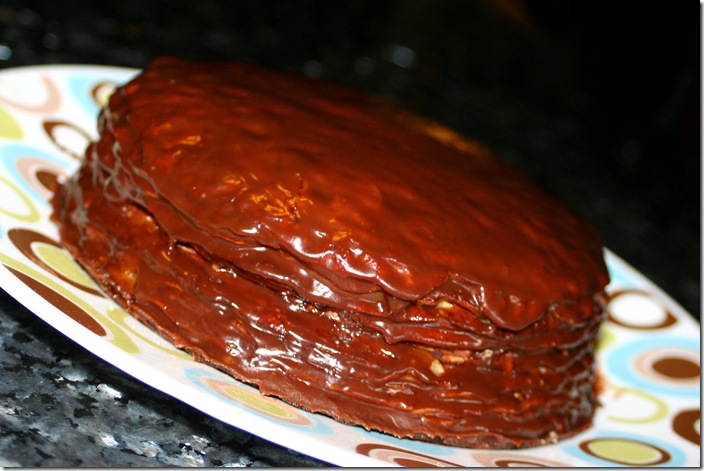 Once the glaze has set up and hardened, carefully slide the strips of parchment out from the cake. 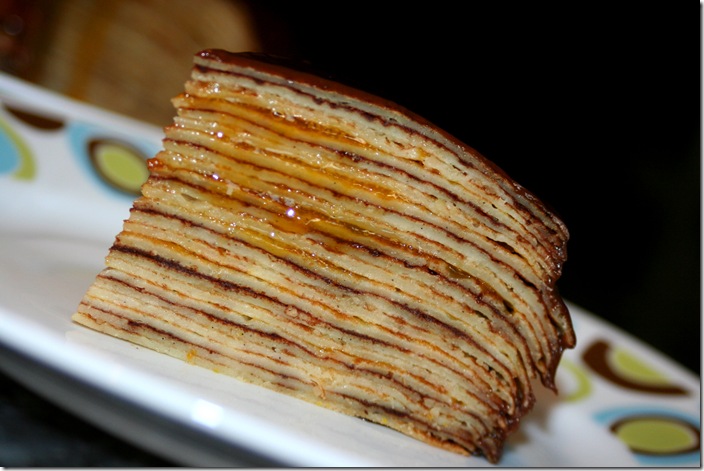