Almost four months ago I joined The Secret Recipe Club and because of that I have been having so much fun discovering new blogs and recipes.  Because of that group I’ve enjoyed making some great new recipes, Home Style Chicken Curry, Holy Guacamole and Cilantro Lime Chicken.  I’ve really enjoyed participating with other food bloggers in posting and sharing our finds, adaptations and new-to-us recipes all on the same day and at the same time.  I thought a once a month cooking and posting commitment would be a lot of fun and probably just the right amount of work and commitment to keep me motivated in posting to my previously neglected cooking blog.  Never did I imagine that it would really light a spark and get me posting more…and a lot more.  In the past four months I have posted a total of 53 recipes which isn’t much less than what I posted during the previous five years combined, which was a total of only 59 recipes.  Looks like 2011 is going to be a good and delicious year here in the Cook Lisa Cook house.

Since I’ve been having so much fun with my Secret Recipe Club postings I decided to join another cooking group.  If you’ve read much of this blog or my Moments with Maisie blog, you know that we love to travel and we enjoy foods from all over the world.  So when I saw that German Mama of From Arepas to Zwetschgen was starting a new cooking group called Cook Around the Globe, I thought what a perfect fit for me and how fun it would be to join again with other food bloggers and explore recipes from an assigned region of the world.  I had fun cooking along with the theme this month and I’m looking forward to see where I’ll be visiting next with new food flavors and recipes.  Check out From Arepas to Zwetschgen on September 1st to see all the other bloggers who are participating as well as their recipes as we Cook Around the Globe. 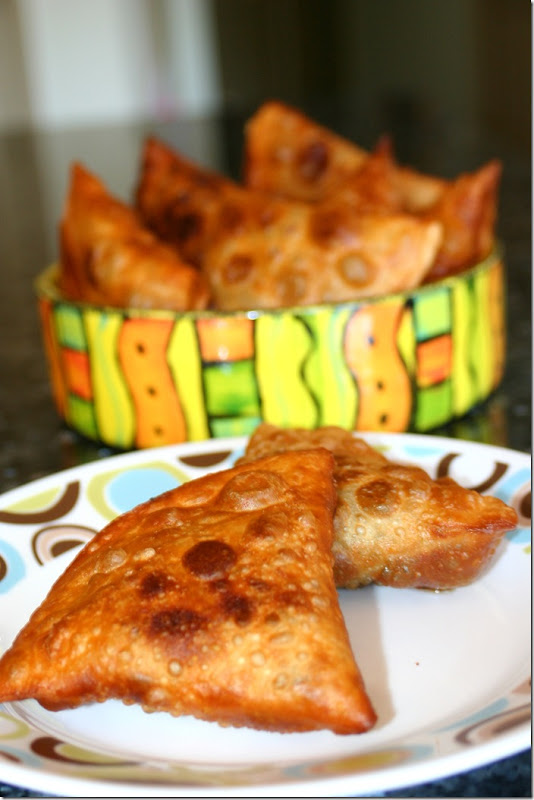 For this, the inaugural month of Cook Around the Globe the theme is Bermuda & the Caribbean "North" (Bahamas, Turks & Caicos, Cayman Islands, Cuba, Jamaica, Haiti, Dominican Republic, Puerto Rico.)  As it worked out, I have had a recipe idea swirling around in my mind for many, many months, to combine a traditional Jamaican meat pie with my favorite Jerk Chicken marinade and make a Jamaican Jerk Meat Pie.  What had stopped me though from attempting this was really two things.  First, I’m not always great at making pastry dough and honestly I just couldn’t motivate myself to take on the challenge and second, I rarely fry things in the house.  When light finally dawned on Marblehead here and I realized that I could use ready-to-cook tortillas, well that took away the biggest hurdle.  Then, because my idea fit so perfectly with the theme this month, well I decided that this was my opportunity to give my recipe a try so I decided to fry.

The process of making the pies was quite simple.  First, the Jerk Sauce all comes together in a blender, easy peasy.  For the filling I browned my meat, added the veggies and Jerk Sauce and cooked it for a few minutes and the filling was done.  Then the dough was easy, open the package.  Forming the pies wasn’t difficult but I have included pictures of the process.  Then it was just a quick fry to cook the dough as the filling was already completely cooked.

The ready-to-cook flour tortilla wrappers worked out perfectly, making a nice thin, crunchy crust.  The pies were best right out of the fry pan but they were still pretty tasty the following day when I heated them up in the oven so to “crisp up” the dough.  Eammon and I really enjoyed the flavor of the Jerk seasoning and the pies had just a little bit of spicy kick, not overly spicy or spicy “hot”.  Because we really enjoy spicy “hot”, I think next time I’ll add a second Scotch Bonnet to the mix.  These Jerk pies were also a nice change in flavor from the traditional Jamaican meat pies that we usually enjoy.  I’ll be making these again and I hope that you’ll give this recipe a try too and enjoy it as much as we did. 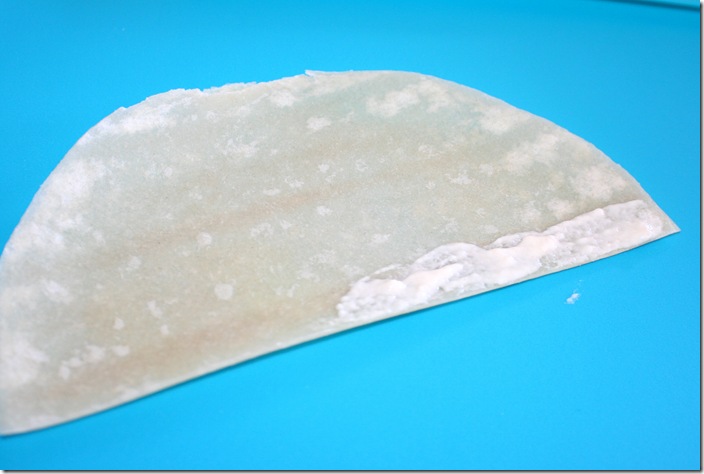 Working one (half) tortilla at a time, paint half of the straight edge with the water/flour “glue.”  Don’t be stingy as you want the dough to stick together and the “glue” will cook when the pies are fried so it won’t be noticed. 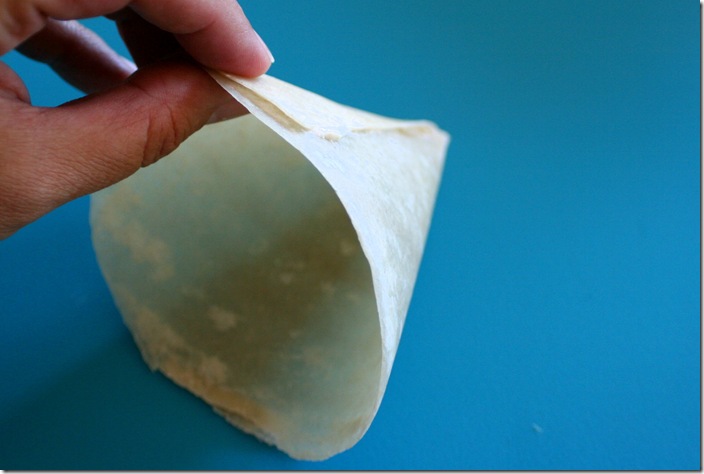 Create a cone by wrapping the edge with the “glue” over the other half of the straight edge and squeeze along the “glue” line to seal. 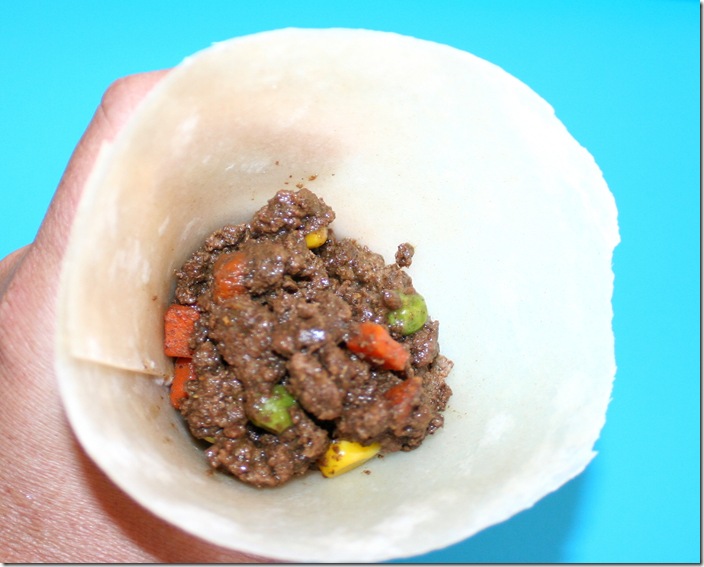 Place approx. 1/4 cup of the cooked meat mixture into the cone. 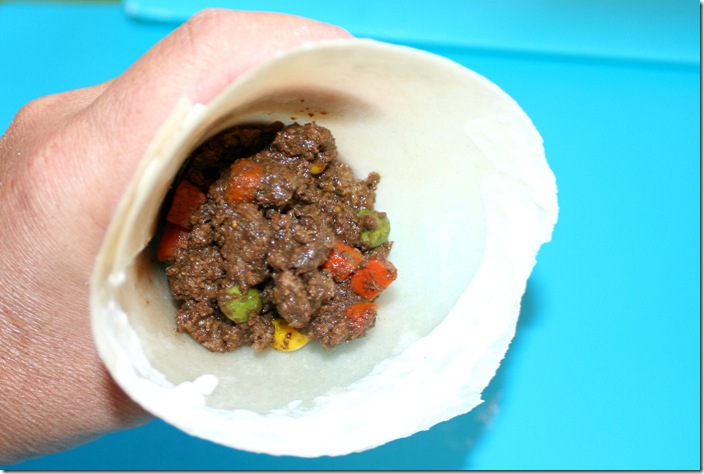 Paint the flour/water “glue” along half of the inside open edge. 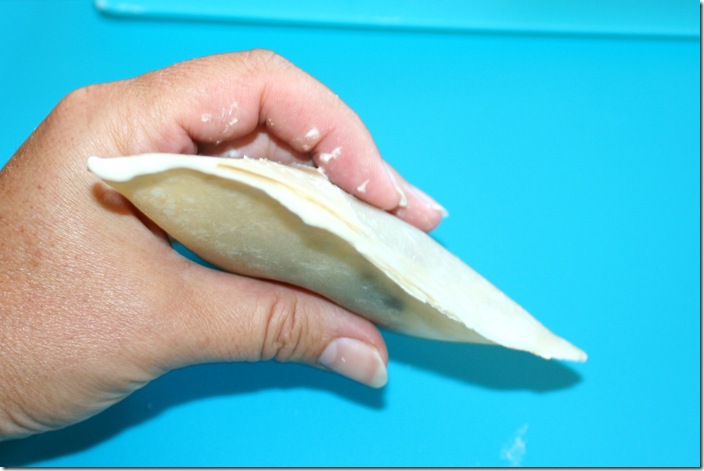 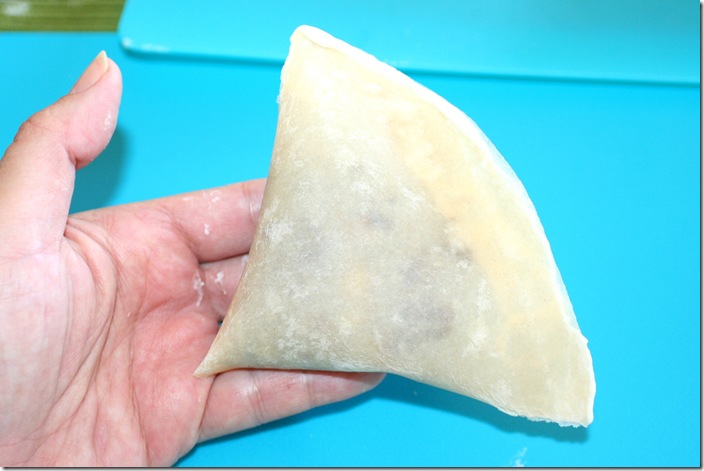 The sealed up pie ready to be fried. 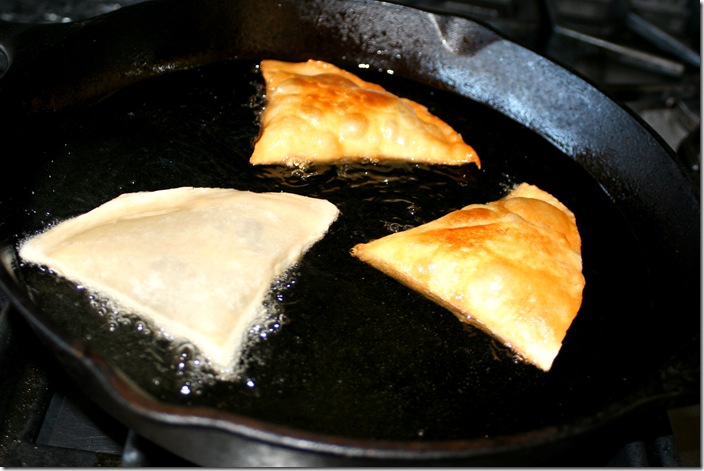 The pies fried up very quickly as I was only trying to cook the dough because the filling was already cooked.  Turn pies to cook both sides and when golden brown, remove to a paper towel lined pan to drain. 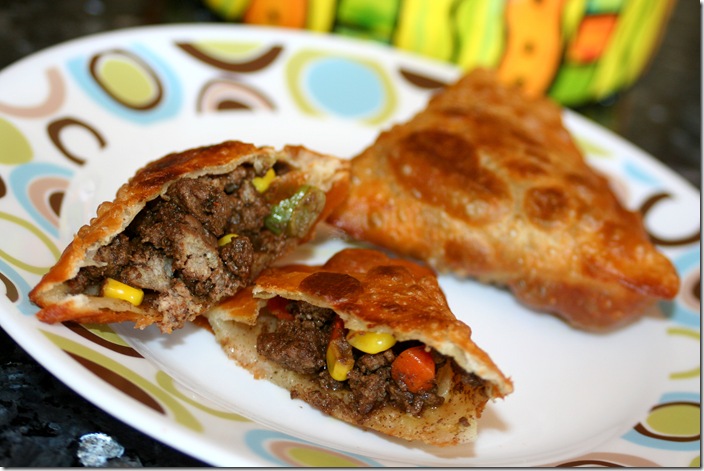 a bit of flour and water mixed together to form a paste to "glue" the dough together
Oil for frying, your choice: corn, vegetable, canola

In a large skillet brown the meat breaking it apart as it cooks into a fine mince.

While the meat is cooking add the Scotch Bonnet, scallions, garlic, vinegar, soy sauce, thyme, allspice, cinnamon and brown sugar to a blender and process until smooth.

Fry the pies on both sides until golden.  Remove to a paper towel lined pan and allow the pies to drain.  Serve hot or at room temperature.