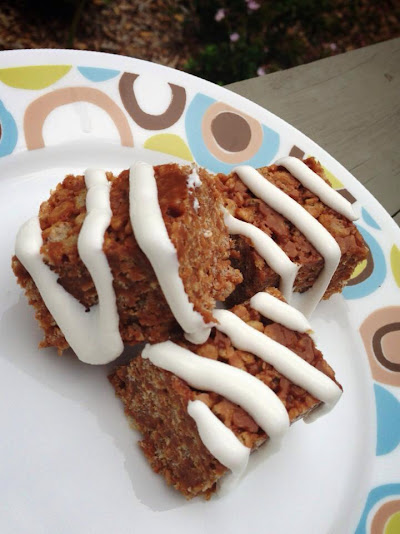 Summer is flying by and here we are again, the third Thursday of the month and it's Improv Cooking Challenge time again. Like last month I'm still out of sorts as I'm still without a computer, thus still taking pictures with my iPhone and blogging on my iPad.

This month for the Improv Cooking Challenge our hostess Kristen of Frugal Antics of a Harried Homemaker challenged the participating bloggers to make any recipe of their choosing using the specified ingredients of vanilla & chocolate. Now those ingredients sound easy enough, I mean who doesn't love vanilla and chocolate? My problem in choosing a recipe though is that I'm not eating either ingredient right now and Eammon doesn't need to eat either ingredient so I limited myself to recipes that would appeal to my Maisie. In the end it was Maisie who led me to make Dark Chocolate Peanut Butter Rice Krispy Treats with Vanilla Coconut Frosting.

In the end neither Eammon nor I tried even a morsel of the treats but by the way Maisie and her friends devoured them, I can say that they were a huge success. 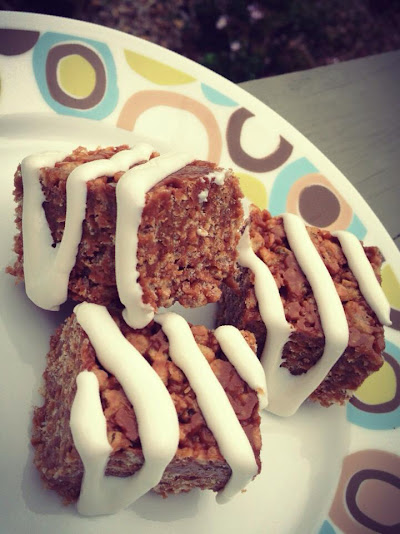 Grease an 8-inch square pan and set aside.

Add 3 TBS. buttery spread and the marshmallows to a microwave safe bowl and heat for two minutes on high. Stir to combine and stir in the peanut butter. Heat for an additional 30-40 seconds and then working quickly, add the Rice Krispies and stir to combine well. Press the mixture into the prepared pan and chill until set.

Once the bars are set, cut into squares but keep them close and together. To make the frosting, combine the remaining 1/2 cup buttery spread, powdered sugar, coconut milk and vanilla bean paste and whisk together until creamy. Drizzle onto the chilled bars.