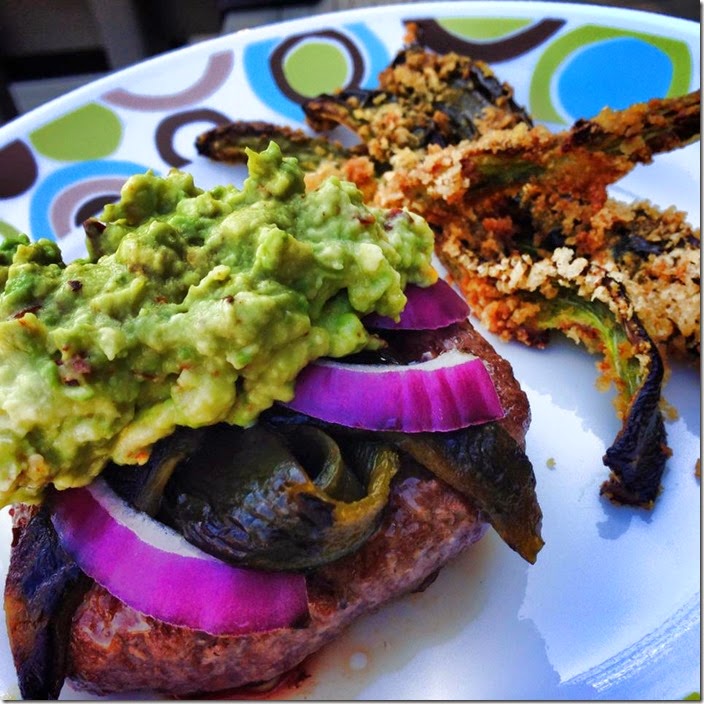 This month choosing a recipe for Secret Recipe Club was beyond difficult because we wanted to eat, drink and taste every.single.recipe on Leslie’s blog, La Cocina de Leslie, my assigned blog this month…well maybe not the Criadillas a la Mexicana because we just might not be that adventurous, but seriously, everything else we would loved to have tried.  Leslie lives in Mexico and her blog is filled with the delicious Mexican recipes she grew up eating and traditional Mexican recipes, which she learned from her Mother-in-law, which are the tastes her husband grew up enjoying.  How we would delight in enjoying all of Leslie’s recipes but because of my diet of no wheat, grains, sugar, sweetener, legumes, rice, dairy, soy or corn, we had to limit ourselves to recipes which we could adapt easily.  Trust me though, even with our limitations there were plenty of wonderful recipes to choose from and the choice was difficult so in the end we made three, four, five…depending on how you count recipes, well multiple recipes were made! Cream of Ancho Chile Soup, Roasted Poblano Burger with Chile de Arbol Guacamole, Homemade Red Pepper Flakes (for the Chile Arbol Guacamole) and Baked Poblano Fries.  Thank you Leslie for our delicious Mexican feast!!  Check out Leslie’s blog La Cocina de Leslie and delight in some wonderful flavors of Mexico. 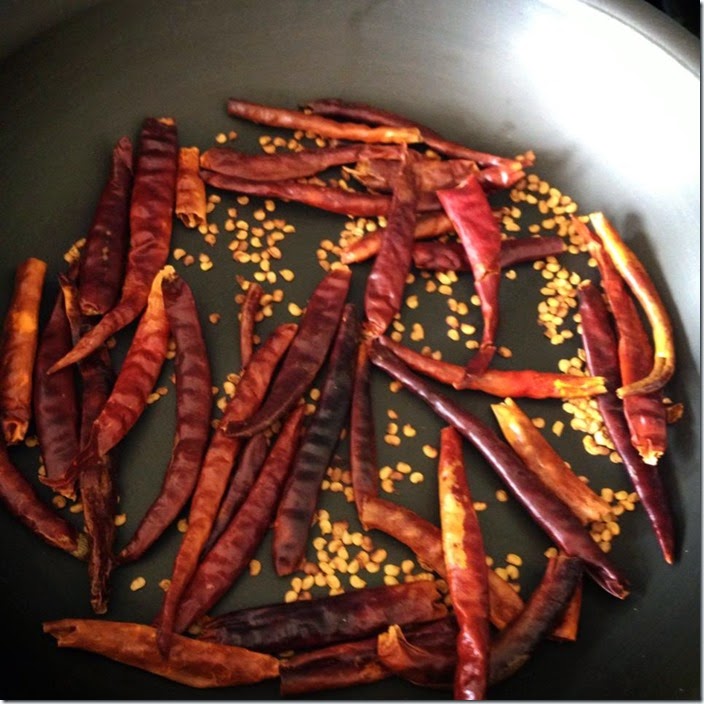 We began by toasting Chile Arbol until they just began to darken in color. 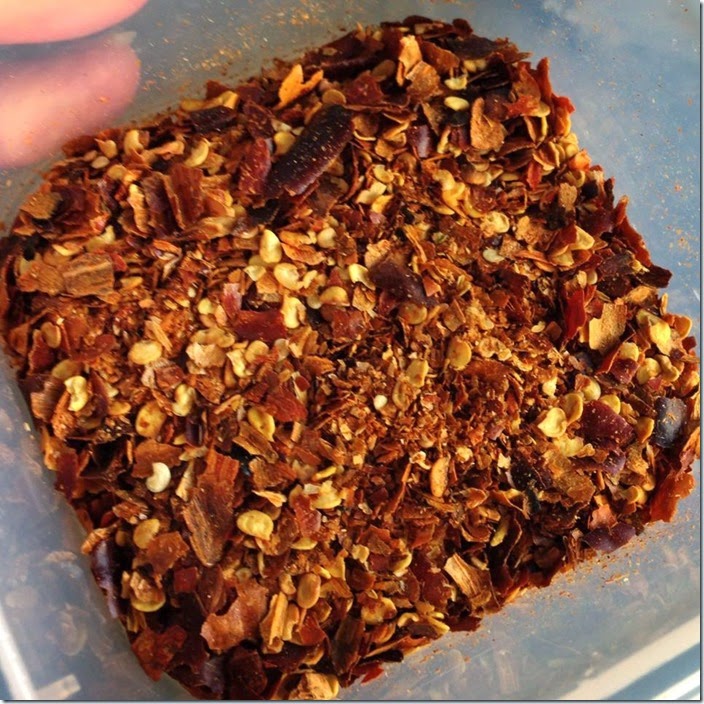 Then we removed the stems and whizzed them in the blender for a quick chop. 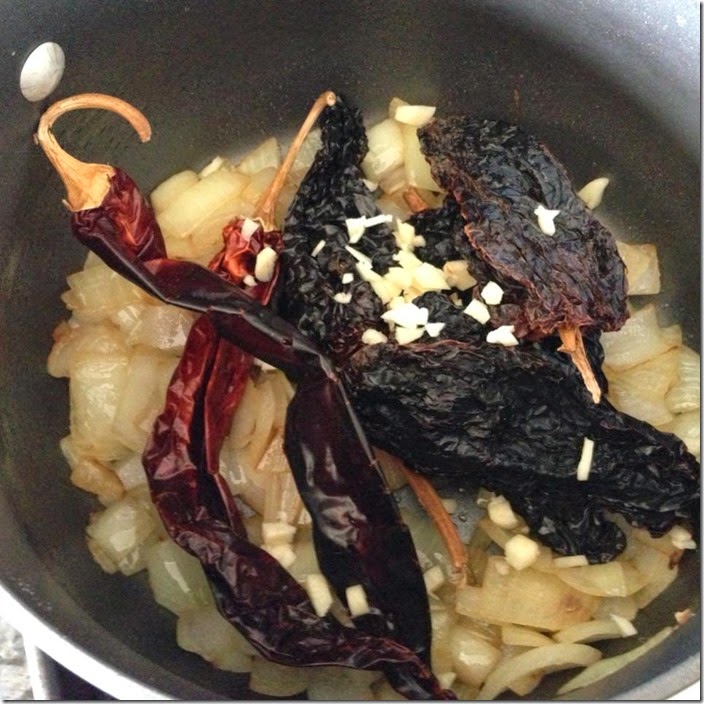 We got the soup going by sautéing some onion and then we added dried ancho and guajillo chilies along with some garlic, chicken broth, cumin and in place of the Mexican crema or sour cream, we added totally non-traditional Mexican, coconut milk for the added creaminess. 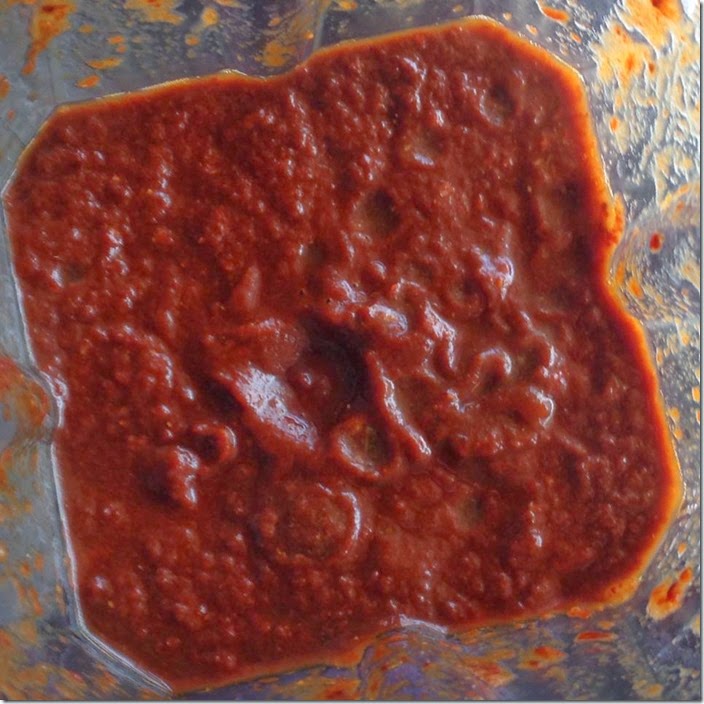 Once the onions and chilies had a nice little simmer in the pot, the stems and seeds were removed and everything went for a nice little ride in the blender. 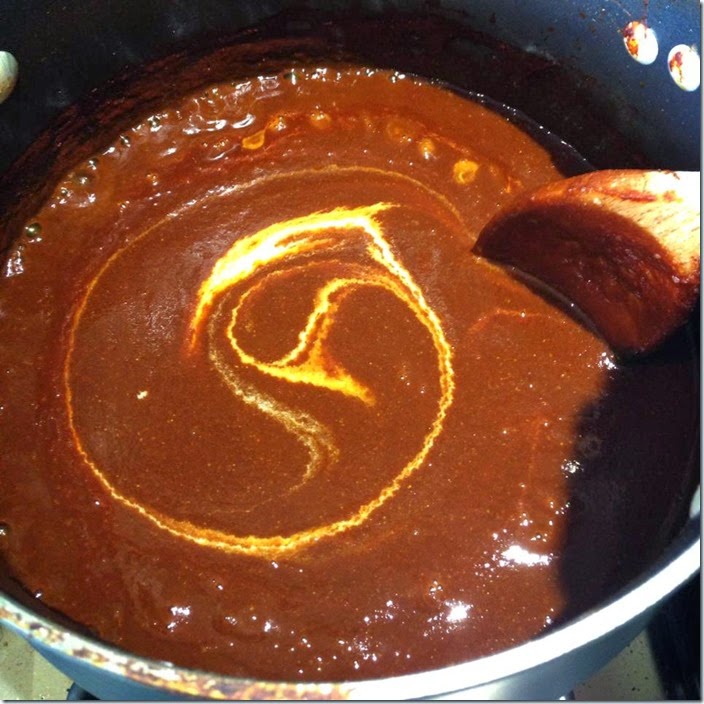 The onion pepper puree was then strained back into the original pot, more chicken broth was added and then the coconut milk was stirred in. 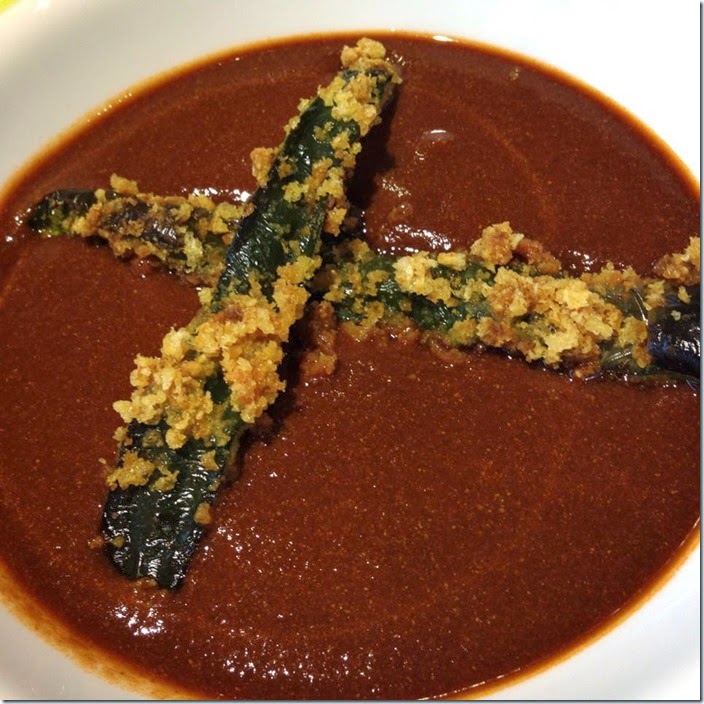 ‘The soup was ladled into bowls and topped with even more peppers, Baked Poblano Fries. 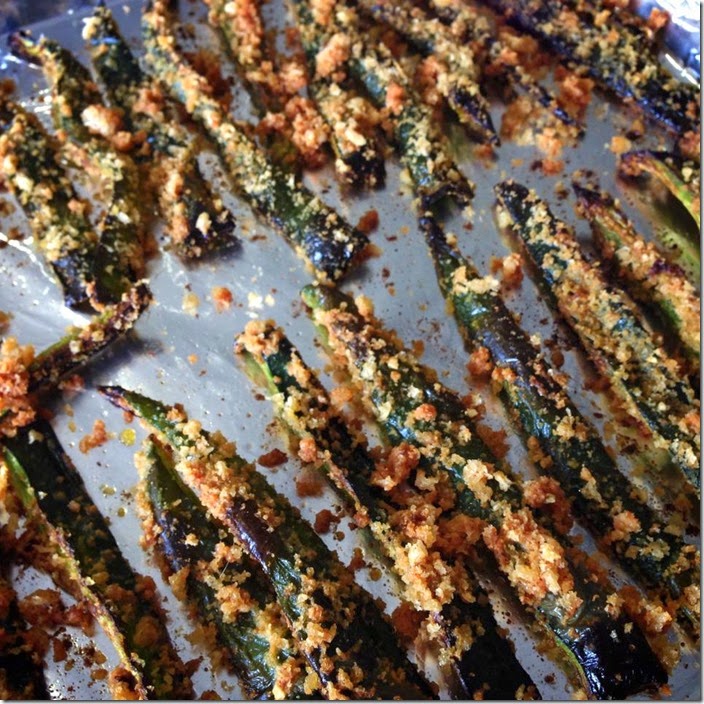 Oh-my-word the Baked Poblano Fries were the BOMB!!  Leslie coated hers with bread crumbs but as we’re not eating wheat or grains, we opted instead to coat the poblanos with crushed pork rinds seasoned with cumin, chili powder, garlic powder and salt.  Stop everything you’re doing and go make these fries right now…trust me, you’ll thank me…or maybe not, because once you start eating these fries you just can’t stop as they’re that delicious. 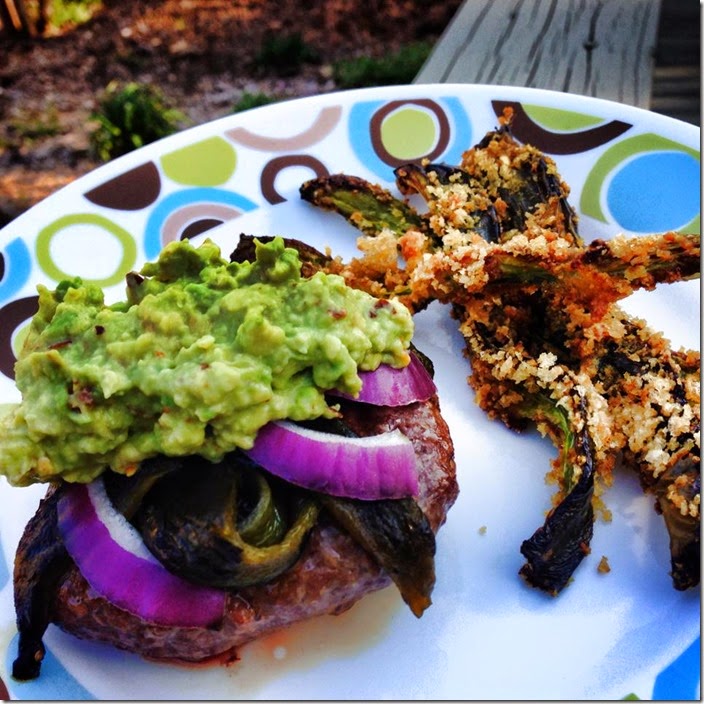 Heat the coconut oil in a medium saucepan over medium-high heat.  Sauté the chopped onion for about 1 to 2 minutes, until it turns translucent.  Add the dried chilies and minced garlic and sauté for another 30 seconds.  Add 3 cups of the chicken broth and bring to a boil.  Reduce the heat to low, cover and let simmer for about 10 minutes; let cool slightly.

Remove stems and seeds from the chilies.  In a blender or food processor, puree the slightly cooled contents of the pot.  Strain the chile puree into the same saucepan the chilies were cooked in and add the remaining cup of chicken broth.  Season with the ground cumin and a little salt.  Bring to a boil over medium-low heat.  Reduce the heat to low and stir in the coconut milk.  Let simmer for about 5 minutes.  Ladle soup into bowls.  Garnish with Baked Poblano Fries.

Thinly slice 3/4 of the red onion into half rounds. (Reserve the remaining quarter of onion for the hamburger meat mixture.) In a medium bowl, toss together the red onion rings and the juice from 3 limes.  Season lightly with salt; cover and refrigerate until ready to use.

Roast the poblano peppers on a grill or over the fire of a gas stove, turning occasionally, until the flesh is completely charred.  Transfer the roasted poblano peppers to a plastic or paper bag and let sit for 15 minutes as this allows the peppers to sweat, making them easier to peel.  Remove the charred skin, stems and seeds from the peppers.  Slice the peppers into thin strips.  Heat one tablespoon of oil in a medium skillet over medium-high heat.  Add the pepper strips and sauté for about 5 minutes; season lightly with salt.

Combine the ground pork and beef in a large mixing bowl.  Grate the remaining 1/4 red onion directly over the meat.  Stir in the crushed pork rinds, egg, minced garlic, salt, and ground black pepper.  Mix until well combined. Divide the meat mixture into 8 to 12 equal parts and shape into balls; refrigerate until ready to use.

In a small skillet, toast a handful of arbol chilies for about 30 seconds to 60 seconds just until the chilies begin to darken in color; remove from heat and discard stems.  In a blender grind the chiles until very fine.  Mash the avocados in a bowl and season with salt.  Stir in 1 teaspoon of the ground arbol chile flakes, adding more until the guacamole has reached the right amount of heat. Cover the guacamole with plastic wrap (to prevent browning) and refrigerate until ready to use.

Shape each ball of meat into a patty.  Grill or pan fry until desired doneness.   Top each burger with roasted poblano strips, pickled red onion and guacamole.

Preheat oven to 375F.  Line a baking sheet with aluminum foil and grease lightly with coconut oil or olive oil.

Beat the eggs in a small bowl.  Season with salt and pepper; set aside.  Place the crushed pork rinds on a medium plate, season with salt, chili powder, cumin & garlic powder; set aside.
Slice the tops off the tops of the poblano peppers. Using your knife or a spoon, scoop out the seeds and veins.  Slice the chilies in half lengthwise and cut into 1/4-inch slices.

Dip the poblano strips in egg and then coat each strip with the crushed pork rinds.  Arrange the coated poblano strips on the prepared baking sheet.  Bake at 375F for 25 to 30 minutes or until golden brown.